With the upcoming refurbishment of Sounds Dangerous starring Drew Carey at Disney’s Hollywood Studios, comes an interesting rumor about the future of the space it occupies. The latest rumors for the park in general suggest that Disney will attempt to bring a tween audience in by using their multiple successful Disney Channel programs in attractions and entertainment offerings. A copy of the Bibbidi Bobbiti Boutique using High School Musical and Hannah Montana inspired child makeovers will debut at the park this fall, and a new attraction themed to Ms. Montana and her Disney Channel friends may come following after. 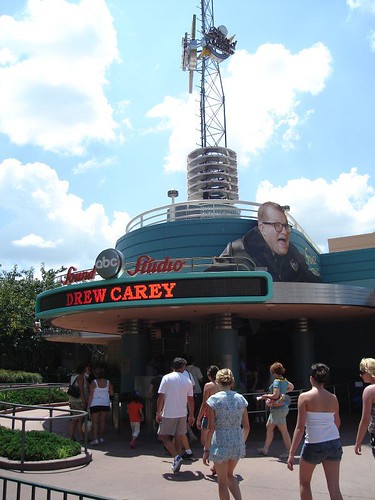 If the rumors I’m hearing are true, a new sound-based attraction using new, surround-sound headphones and an HD projector to bring guests into their favorite Disney Channel artists (i.e. The Jonas Brothers, Miley Cyrus, Ashley Tisdale) songs will be coming to Hollywood. While I’m not so sure that Disney will keep the headphone concept in the theater, I strongly believe we will see a Disney Channel based attraction of some kind in the theater by 2009. In the meantime, don’t worry about Sounds Dangerous (at least if you’re one of the few who enjoy the attraction) going anywhere just yet, the latest closure is really just to accommodate American Idol construction and survey the theater for future development. Sounds Dangerous should return in early August, but will probably be on borrowed time by then, as the Drew Carey attraction contract expires on January 1, 2009.