We have sad news to report this morning. It would appear that 2 monorail trains have collided. Full details are not available yet, but as they become available we will post them here. Our condolences go out to the family of the deceased driver.  Below, find details from cnn.com:

(CNN) — A monorail train at Walt Disney World crashed into the back of another train early Sunday, killing one driver, according to an amusement park spokesman and a witness interviewed by CNN. 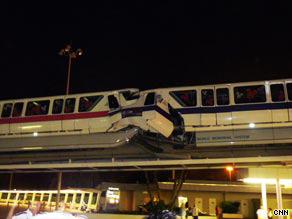 The crash occurred about 2 a.m. at one of the monorail stops at Disney World in Florida, said the witness, who requested anonymity.

“Today we mourn the loss of our fellow cast member,” said a statement by Mike Griffin, Disney’s vice president for public affairs. “Our hearts go out to his family and to those who have lost a friend and co-worker.”

The statement said the monorail was shut down, “and we will continue to work closely will law enforcement to determine what happened and the appropriate next steps.”

The witness said one monorail train rammed into the back of a stationary train. A photo of the crash provided by the witness showed the front car of a train badly damaged where it hit another train at a station.

According to the witness, a family of six in one train was freed from a damaged car. The witness said the family was shaken but uninjured.