The King of the Wild Frontier is gone.

Fess Parker, the strapping star who played Davy Crockett in the hugely popular Disney television show of the 1950s, died today of natural causes at age 85, his family announced.

The actor, whose classic roles also included the son-consoling dad in Old Yeller and another ‘coonskin-cap-favoring frontiersman in NBC’s Daniel Boone, had retired from showbiz in the 1970s and founded a hugely successful winery and resort in Santa Barbara. 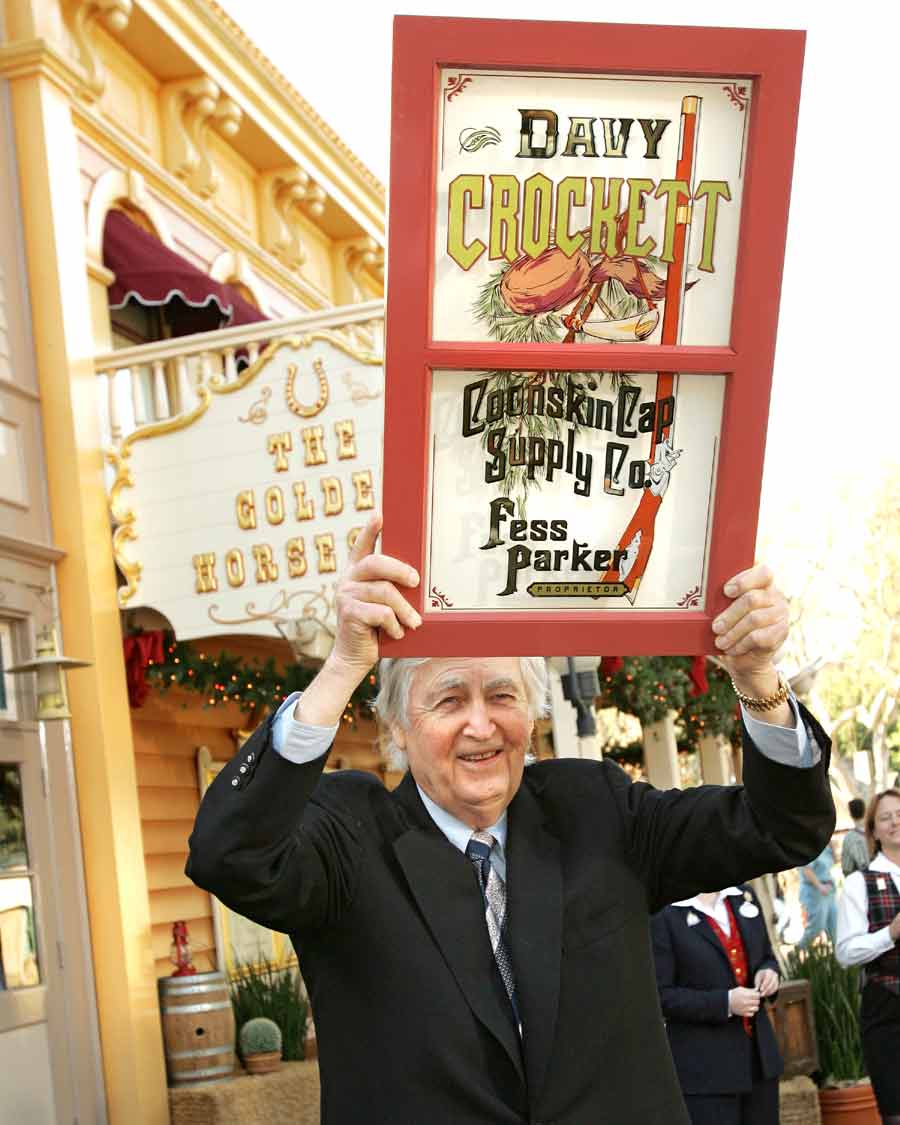 Fess Parker recieved a rare Frontierland window dedication at Disneyland in late 2004, as seen above. He was also one of the earliest Disney Legends honored back in 1991. From the Disney Legends website:

In the mid-1950s, when Fess Parker first donned a coonskin cap to play the American historical character Davy Crockett for a three-part Walt Disney television show, little did he know he was about to become a hero to Baby Boomers across the nation.

More than forty years later, in 1997, Fess described the profound influence his popular character had on young viewers. “Folks tell me over and over how much that character shaped their lives,” he said. “I have to believe that the impact of those programs was due as much to the values inculcated in them as to their entertainment quality.”

Fess was catapulted to fame almost overnight after “Davy Crockett Indian Fighter,” “Davy Crockett Goes to Congress,” and “Davy Crockett at the Alamo” debuted on the “Disneyland” television series, beginning in 1954. Even the ditty he recorded for Disney and RCA records, “The Ballad of Davy Crockett” was on the lips of every young boy (and girl) in America at that time, winning the actor a gold record. And when Disneyland opened in 1955, his personal appearance on horseback, as Davy Crockett, proved to be a huge crowd-pleaser.

Born in Fort Worth, Texas, on August 18, 1924, Fess grew up on a farm in San Angelo, Texas. Named after his father (“Fess” means “proud” in Old English), he graduated from the University of Texas in 1950, where he studied law and business administration. He then moved to Los Angeles, to pursue an acting career and studied drama at the University of Southern California. Shortly thereafter, he made his film debut in “Untamed Frontier,” starring Shelley Winters.

In 1954, Walt Disney spotted the actor in a film called “Them!” and quickly signed Fess to a Studio contract. He went on to star in such Disney films as “Westward Ho The Wagons!” “The Great Locomotive Chase,” “Old Yeller” and “The Light in the Forest.” He also starred in two additional Davy Crockett television shows: “Davy Crockett’s Keelboat Race” and “Davy Crockett and the River Pirates.” Much later, in 1978, Fess appeared in “NBC Salutes the 25th Anniversary of the Wonderful World of Disney.”

After leaving Disney, Fess donned his coonskin cap once again to play Daniel Boone. For six years, beginning in 1964, he starred in the popular television series by the same name and directed five of its most popular episodes.

Today, a successful businessman and real estate developer, Fess owns a winery in Los Olivos, California (near Santa Barbara) where he can often be found signing his autograph for wine and Disney lovers, alike.