People can no longer complain that we are just collecting little figures that take up shelf space… Vinylmation are now functional. Want a cool drink? Vinylmation is there. Want a yummy chocolate treat for your next Disney party? Yep, Vinylmation can help you with that now too. It was announced today that those mysterious Vinylmation Ice Cube Trays I told you about a few weeks back, will be officially released on December 3rd! Here was my first look at the Ice Cube Tray and 3″ figure that comes with it: 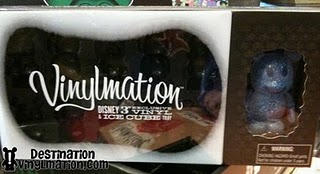 In the clip I released a couple days ago, Disney’s Steven Miller explained how the Ice Cube Trays were mistakenly released at Disney’s Hollywood Studios. That clip is part of a larger interview about Vinylmation we will include in Destination Vinylmation Podcast Episode 3 to be released Sunday.
You can see Disney’s Vinylmation Blog Announcement Here:
http://eventservices.disney.go.com/static/vinylmation/blog.html

Previous
Are you a tin or a box person?