Disney California Adventure park and Disney’s Hollywood Studios in Florida will celebrate the premiere of Disney Channel’s new multiplatform brand, Disney Junior, with “Disney Junior – Live on Stage!” next year. The lively show in the Parks will debut with new characters, some new adventures and a new marquee.

Children and parents who now enjoy the popular “Playhouse Disney – Live on Stage!” at both Parks can look forward to sharing this new production, which brings back three audience favorites (Mickey Mouse Clubhouse,Handy Manny and Little Einsteins) and also introduces a brand new segment based on Disney Junior’s newest series that will debut in February 2011, “Jake and the Never Land Pirates.”

“Jake and the Never Land Pirates” will air on Disney Junior in February 2011 and will share the magical and adventurous world of Never Land with preschoolers. Children will be drawn to the main character Jake, an enthusiastic young boy who leads a team of kid pirates (Cubby and Izzy, along with their faithful pirate parrot, Skully) in fun adventures that encourage interactive responses from young viewers. The clever premise provides kids and families with a fun way to learn teamwork. 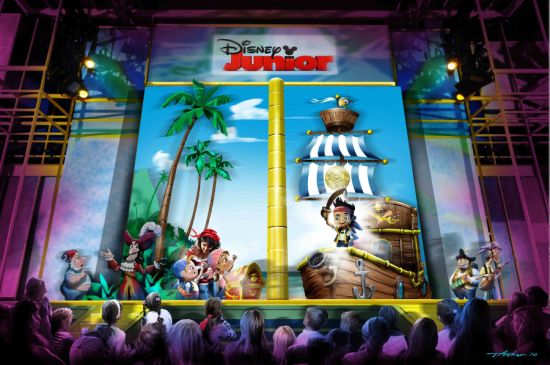 Stories from the show will come to life in the Parks with colorful, puppet versions of some of the most popular Disney Junior characters, bright visuals, whimsical scenery that fills the stage, catchy songs and interactive moments.

“Disney Junior – Live on Stage” is scheduled to debut at Disney’s Hollywood Studios and Disney California Adventure park in March 2011.