As we noted a couple days ago, Disney posted the upcoming Villains set in the “Vault” page of the official Vinylmation website under the section for Disney Store Exclusives. This prompted the question; “Are these figures currently available in the stores since only released sets go onto the “Vault” page?” I sent a message over to Steven Miller at Disney who is one of the people responsible for Vinylmation and Trading at Disney and he said they are still determining a release date, but the set will “most likely” be released in Japan first, and then will appear “later in January” in the U.S.

I don’t know about you, but I’m not planing a trip to Tokyo Disney in 2011, so since we have to wait a bit longer, here are some 360 images of the Villains. 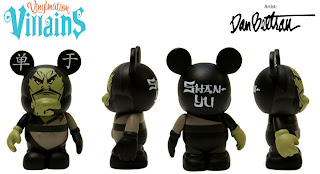 Shan Yu from Mulan. Looking at the back, that may answer the question I posed on Episode 5 of the Destination Vinylmation podcast. 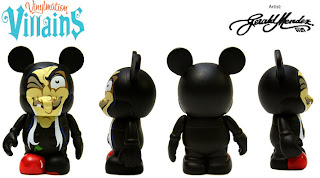 The Witch from Snow White. Not sure what you could have done with the back, but after seeing the detail of the apple on the front, I was expecting more. 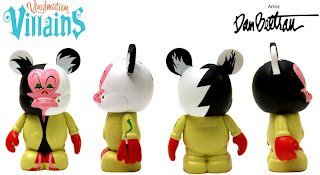 Cruella de Vil from 101 Dalmations. She actually is holding her cigarette! Awesome detail on the side of the figure. Way to go! It’s also interesting to note that Villains 1 seems to have artists new to designing Vinylmation. So we should get some fresh takes on these figures.
For more on Villains 1, keep checking our evolving blog post on it here.