A Star Wars Vinylmation tray photo popped up on the Vinylmation Facebook today, so we thought we’d share it with you. Steven Miller did say the packaging was gonna rock, and so far he was right! (Click for larger picture) 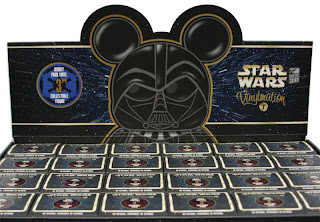 On the left side is the Imperial symbol with the words, “Disney Park Vinyl 3″ collectible figure”. Does this mean it will only be in parks? If anything THIS is a series to also put in stores, but we shall see.

According to the right side of the display, this is part of the 30th anniversary of The Empire Strikes Back which came out in 1980. I guess knowing that, we should have known that it wasn’t coming out in 2009.

Also worth noting is that it says “Star Wars Vinylmation 1″ so that seems to confirm (as if there was a doubt) that there will be a series 2!! Hopefully series 2 will have some 9″, because Steven said there would be no 9” for series 1.

The individual blind boxes also show Star Wars 1 and have the Rebel Alliance symbol on them.

As always, “No refunds, exchanges, or returns”

What are your thoughts? Do you like the look? (I know we do!)