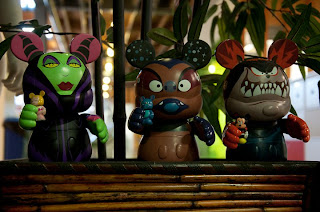 The following concept art is from the official Disney Vinylmation Blog. 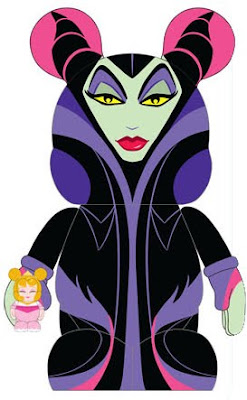 Maleficent is the villain in the 1959 Disney animated classic “Sleeping Beauty”. This isn’t her first appearance on a Vinylmation, her first was in her more sinister and destructive form. After seeing this concept art, the 3D form (at the top) disappoints with the translations just a bit. We will have to wait to see it in person, before making a final decision. Princess Aurora is making her Vinylmation debut in this combo set, however this still leaves us without a true 3″ Vinylmation Princess. 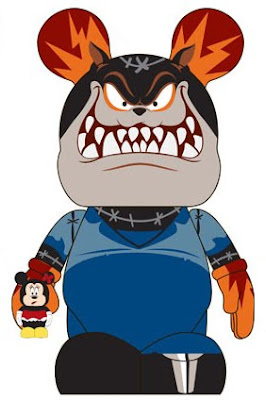 This is Pete’s 3rd appearance on a Vinylmation, all in various forms. Although, this time he takes on his role as Julius from the 1995 Academy Award nominated short, “Runaway Brain”. Pete looks great… with his peg leg, stitches and lots of color to the ears and hands. This set comes with a Minnie Mouse Jr. We will see a 3″ Mickey Mouse from “Runaway Brain” as a combo topper in the upcoming Park 6 set. 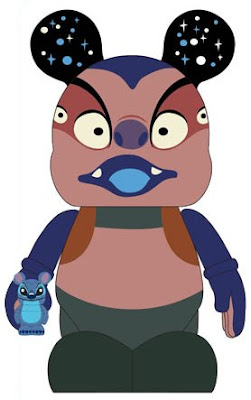 We have Jumba to thank for bringing the lovable Stitch into our lives. Jumba created Experiment 626, as Stitch was named before Lilo adopted him, in the 2002 Disney animated “Lilo and Stitch”. Jumba’s round head and large body fit nicely onto the 9″ Vinylmation figure. The artist brilliantly uses the ears to represent the stars and planets of outer space. Stitch Jr. is the second Vinylmation for this fan favorite Disney character. His first appearance was as a 3″ vinyl in the Park 5 series.

Are you ready to add some 9″ Villains to your collection? Save the date, March 21st.

I’ve been waiting for Maleficent and I’m kinda disappointed….She just looks so odd. Its the shape of the head thats throwing it off….too bad really….Damn!