Disney today announced some details of the upcoming Pirates of the Caribbean series. It will be a blind box set based on the theme park attraction and will have 11 characters with 1 mystery chaser. Although this series is not based on the movie, a Jack Sparrow chaser is a real possibility… as he was added to the ride a few years back. Disney should release pictures of more figures as the time comes. We expect the series to be released on May 21st (if the Art of Disney blog is right). Yesterday we saw the Dirty Foot Pirate by Casey Jones. The figure below is also a Casey creation. This series should also give us a good idea of how they will do “attraction” series like the Haunted Mansion set expected in September. 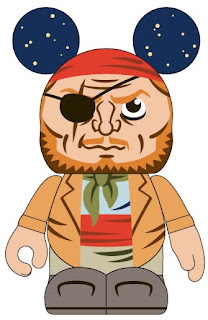 Also notice that this series will be using the new vinylmation mold design.