Update: 5/21/11 Added Scott Tolleson pics that Evilos discovered on Scott’s facebook page. Now we can see how they came out!

When: Saturday, May 21 from 2pm – 5pm
Where: D-Street, Downtown Disney District, Disneyland Resort
What: Local California artist have been asked to create Pirates of the Caribbean inspired custom Vinylmation. This doesn’t seem to mean characters from the attraction or movie, just inspired by.

The fine print:
Limit TWO (2) items signed per Guest. We ask that you bring no personal items to be signed. Event and information are subject to cancellation or change without notice including but not limited to dates, times, artwork, release dates, and retail prices. Merchandise for signing must be purchased on the event day at the event location. Valid Disneyland® Resort receipt may be required. Paid admission is required to enter Disney theme parks.

Update: 5/14/11 At Midnight @noahfineart announced that he was ALSO making a Pirate 9″ Custom (as well as the previously announced Little Mermaid custom). So now it looks like the May 21st release and signing is with Noah at Disneyland. 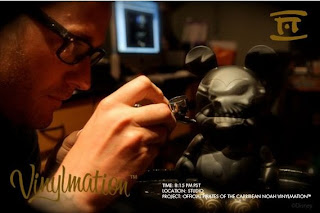 Update: 5/11/11 We created a new posted dedicated to all the clues that Noah hints at so this post doesn’t get to crowded with something that is just a rumor at the moment.
Vinylmation Speculation: Noah’s Pirate?


Update: 5/9/11 On the podcast (and on this post) we’ve compared this release to the release of the Noah special 9″ TRON customs. Now there’s reason to believe that he might actually be the artist of this one to. Tonight @NoahDineArt tweeted this:

Remember that the Noah TRON series had 36 individual custom 9″ figures. Each vinyl cost $595.00. Will that part stay the same too? Since the announcement at the Art of Disney blog is only for California, will this series be smaller than 36? The release date is fast approaching. I have a feeling we will find out more, really really soon.

For information about the 12 piece blind box 3″ Pirates of the Caribbean Attraction set scheduled to be released at the “beginning of July” check out our post Pirates Explained.

Update: 4/10/11 The Art of Disney blog has changed the wording of the announcement to include the words 9″ in the description of this even. (Compare this to the original announcement farther below)

This begs the questions, “Is it just one design? Is it a very limited Series like the Noah 9″ TRON figures? Is it a set of 9″?” What do you think?

As normal, we were clicking the links looking for Muppets 2 info on the Art of Disney Event’s page, and lo and behold, they updated it. Most of the dates in the calender are already known, but one new date stuck out. May 21st! The rumored Pirates (of the Caribbean?) set will be released that day, along with a signing of the set at the Disneyland Resort from 2-5pm. This date makes sense, as Pirates 4 On Stranger Tides opens on May 20th.

No word yet on the artist, but since it’s California it’s a possibility that the artist is Monty.

Who would you like to see in this set? Characters from the ride or the movie? Jack? Keira? Let us know in the comments!