Update: 7/18/11 Disney has officially announced a July 29 release date for both Davy Crockett and Animal Kingdom. Here is a first look at Animal Kingdom (that is not concept art) 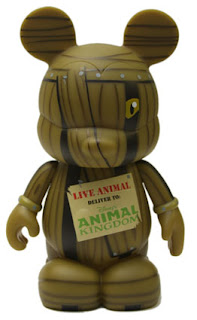 
Update: 6/20/11 The D-Street stores will still released Up and Alien Encounter on June 24… however the Online store will NOT be releasing them on that day. Disney wants to hold back and see how many they have to give to online sales first. We will post the new date when it is announced.


Update: 6/7/11 Disney announced release dates for Alien Encounter ($74.95) and Up! ($44.95) June 24th will be a fun day. Both designed by Maria Clapsis and LE 1000, they will be released at both D-Streets and Online. Check the figures out below. Disney also released this cool flat concept art of the Alien Encounter figure. 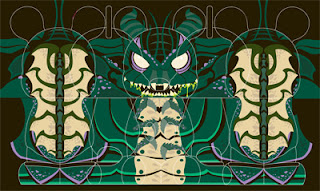 It’s the Nautilus and a Diver modeled after the ride at the Magic Kingdom from 1971 – 1994. Take a close look, half the sub is “underwater” and you can see the giant squid’s tentacles reaching out!

Designed after my favorite movie of all time, until Toy Story 3 came along, this figure represents Carl’s floating house. I wonder what surprises await us on the back? Kevin? Just posted the back.

This iconic Disneyland ride opened in 1959. Guest ride down a Switz themed mountain sized in bobsled like ride vehicles.

ExtraTERRORestrial Alien Encounter was a Magic Kingdom attraction from 1995 – 2003. The ride was in the same location Stitch’s Great Escape is in now. The show was a dark sci-fi like experience that was deemed very frightening to small children. Skippy is the 3″ figure on the right. He was an animatronic alien in the pre-show area.

Davy Crockett, The King of the Wild Frontier, was a 19th century frontiersman that Disney celebrated with numerousness films. He also has a Disney theme park attraction named for him, Davy Crockett Explorer Canoes. This figure comes with an awesome removable hat!

Animal Kingdom is one of the four parks at the WDW resort in Orlando, FL.

The China Pavilion is one of the 11 World Showcase Countries at EPCOT.

Looking forward to the UP Vinyl!!! Any idea when they are going to be released or at least rumored round about time to be released?

No word, or even rumors, about the date. Park 6 is officially coming out on April 1st, so probably after that. Although we haven’t seen any info on dates for Urban 6 9″ yet.

oh man….. that 20,000 Leagues one is almost enough to make me want to break my 9″ rule. really cool design, and i miss that ride a lot. very good childhood memories.

I will definitely be getting 20000 Leagues, Up, and Matterhorn. But does anyone else notice that the weathervane on the Up 9″ is in the wrong place on the backside? It should be to the left of the chimney. They should have bunched the ballons together more as well. They should have put Russell on the porch and Carl in the window (or both on the porch or both in the window). Just my opinion…

…or even better, have Russell and Carl hanging by the garden hose on one of the feet.

I really like the 20,000 Leagues & Alien Encounter sets. And the DAK Crate design really surprised me, I’d heard that was going to be one but I had no clue how they were going to do it & I think it turned out great. I do believe I’d like to have all of these, I hope they’ll all get at least a partial online release.

20,000 leagues is by far my favorite, and I’m somewhat disappointed by the UP vinyl… Being my favorite pixar movie I’m very surprised it’s so “meh”.

These are the best designed 9″ figures to come around in a long time.

i like them all!! but just dont have the room for anymore 9″…until Kermit comes out.:) (then i’ll make room)

What has happened to the 20,000 Leagues Vinylmation set?!? I can’t find it anywhere on the Vinylmation website, and all the other 9″ are already in the Park 6 vault. It’s not in the “sneak” section, either.

Vote Up0Vote Down
Spotlight On: Noah
No Chance for Sunburn in O-Town