Disney released the Bakery set last Friday and I want to talk to you today about these figures and the feature that surprised me once I opened up the box. This is a 6 figure open window series that retails for $11.95. Not a bad price considering what they could have done. They have charged more for less before. Sports come to mind. The packaging is great. The cupcake figures come in the normal cardboard open window boxes, but have a “string” painted on like they are tied up and delivered fresh just for you from your local bakery. 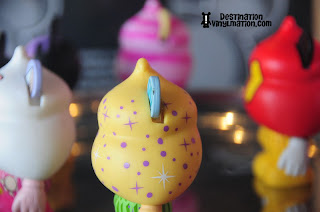 I purchased the Cheshire Cat, my favorite design out of the six. The big selling point for the Bakery series is the removable frosting. It pulls off to uncover the character’s face. So I tore open the box, reached inside, and was shocked at what I felt. I was expecting a hard plastic shell that slipped on and off. Instead, the frosting is a soft, rubbery vinyl cover. 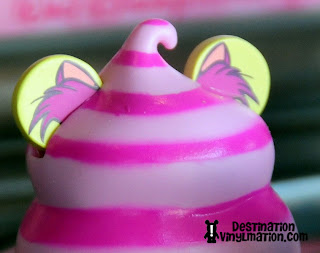 The look is great. It gives the figure a nice texture and it is cool to have this different feel. However, once I tried to remove the frosting, I realized a problem. It is very hard to pull it off and just as hard to get it back on. It feels like you are going to rub the paint off the Vinylmation. And it seems Disney might have thought the same, as the figure comes with the head wrapped in a foam like paper and a plastic bag on top. 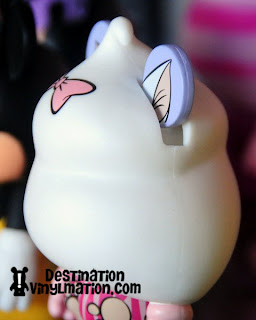 Now, true, you are not going to be pulling them on and off constantly, and it is not a deal breaker, but just know, it takes a little time to roll the frosting off and on. Like I said, they look great. The printing on the frosting is well done and the texture is like nothing else in Vinylmation. The uniqueness of this series makes it an over all win. As far as the figures themselves, again, great paint jobs. Vibrant colors. Nice animation in the faces. 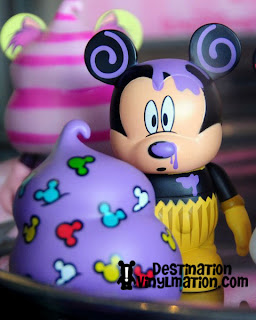 The Cheshire Cat’s big grin fits perfectly onto the Mickey shaped head. Mickey and Minnie obviously look perfect on the mold… all the faces really do pop. The cupcake wrappers are drawn really well around the body of each figure, and they each have their own signature colors or little personalizations. Such as Marie’s paw prints and Tink’s sparkles. 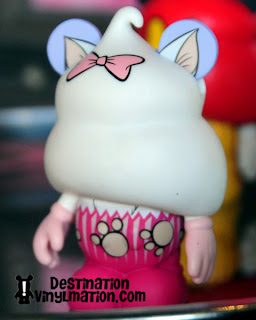 Speaking of Tink, she is the only poorly designed face. So hard to put a female, that’s not Minnie onto Mickey’s shape. 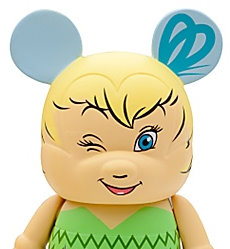 I’ll probably just stick to the Cat for my collection, but I wouldn’t hesitate to pick up all 6 if you want a unique addition to your collection… just keep Tink’s frosting on. 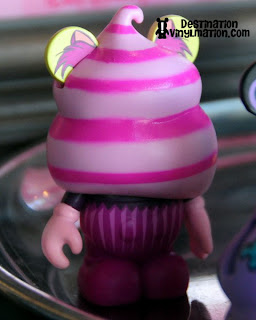 I want all six for sure. and def. agree about tinks frosting.

I agree with Tinks, i also don’t like her hair and i think they should have put Daisy in this set rather than Marie

I can’t wait to get these. I am waiting for the “girls” to arrive in the mail. I love the designs and love cupcakes. I am hoping the “guys” show up online soon. I would also have thought the frosting was easily removed just by lifting it up and take it off. Long live the OLD mold!

I can’t wait to get the Cheshire cat!

i got the minnie ,purple mickey and marie. Maries frosting is adorable beacause she has a bow on it.minnies frosting could have had a little more …….. MAGIC to it but overall a nice vinyl .mickey is just simply great its like he doesnt know why purple is all over him