Last week, I raved over my favorite Jr Vinylmation, but not all Jrs are created equally. There are some that I think are not as well designed, and in general look sloppy. Let me introduce you to my absolute least favorite Jr ever: 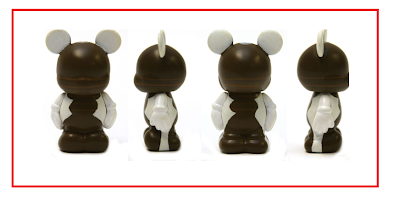 It took me a good fifteen minutes to even figure out what this was. At first I thought that it was a gavel. My second guess… the vase optical illusion… nope. And then it hit me, it was with the chef, so it must have been a pepper grinder.

This is not a really well thought out design, so let’s take it apart. The head is 360, and looks like it might make a promising figure…so the head isn’t awful. Then we get to the body… yeah. The body isn’t 360 which takes away from the head being 360 and ruins the general effect. The curves of the grinder are not even and ends up making it look like Willy Wonka’s Chocolate River/ Waterfall. And then there are the feet… another fail. The stripe down the side takes away even more from the 360 effect, and the round on the foot on the far right image is less rounded than the other foot.

In general, this is not a good design, and makes me wish they had just scrapped it, and gone with another kitchen oriented thing, like a spork. That is all and I will see ya’ll next time.

Destination Vinylmation at D23 and Disneyland