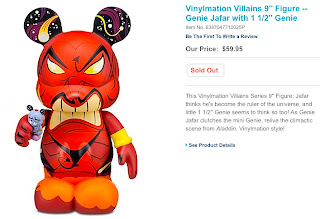 Just a report on what we’ve gathered about the release of the Villains 2 9″/3″ combo. It was released today in several stores and actually showed up at the Disney Store. We saw them available at about 10 AM online, but as of now the store is sold out. A note: They only seemed to be letting people put one in their carts online.

We were at the store in Orlando today and they had received about 9. But they were quickly sold out, as about 10 people were in line at store open. They were allowed to buy two.

Did you pick one of these up? Which store did you get it at? Let us know…

I bought one at the San Francisco Disney store this morning. They had 9. The first 3 people in line bought 2 each, then the next 3 people bought 1 each, and they were gone.

Got one this morning online.

Just picked one up at Northpark store in Dallas at 3pm. They had at least one additional still on the shelf. No idea about initial quantity.

At the Chandler, AZ store they only allowed us to buy 1 each so their stock lasted longer.