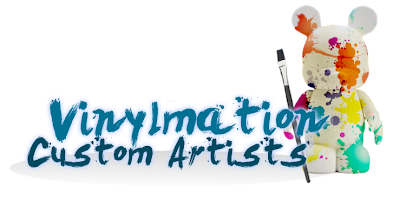 It’s been a while since we last checked in with artist Rust this World. He has some great stuff for us this week that focus on Kingdom Hearts. And if your not careful, inspiring custom artists out there just might learn something as well.

Destination Vinylmation: Last time we spotlighted your work, we took a look at your Kingdom Hearts collection of figures. Well that collection has grown. In fact you sent Destination Vinylmation a 3″ KH custom as a gift. We appreciate the gift which is part of a set of 5 Heartless symbol Vinylmation. They are a nice simple tribute to a great game. Were there any challenges in getting the look you wanted out of these?
Rust This World: So many people were asking me about my Kingdom Hearts stuff that I decided to make a limited edition series of 5. I’ve never done multiples of the same design before and it’s definitely hard trying to get each one to match the others. I sat there for hours, tweaking each one in tiny increments until I was satisfied. A little more red here, a little more black there. These were also the first 3″ figures that I used my airbrush prominently on, making the pink/purple background gradient. I usually reserve that for 9″ figures. I still have a couple for sale if anyone is interested. 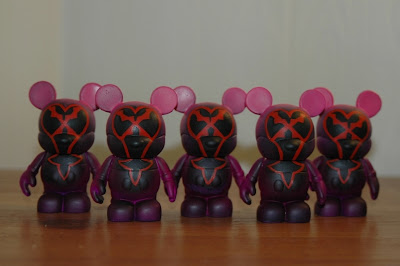 DV: You also have shared with us pictures of a 9″ Hollow Bastian custom. This also references an important part of the KH games. What is it about Hollow Bastian that made you create this custom?
Rust: It’s not only my favorite level, but it’s also a totally unique world to the games. I love the aesthetic of the twisted castle and the frozen lake around it and thought it would look great on a 9″ Vinylmation. Not many people do landscapes on the vinyls, and it was definitely my first. I wanted a background of sorts to put my other Kingdom Hearts vinyls in front of. Every single time I create a new custom, I try to make the design completely different than anything else I’ve seen. 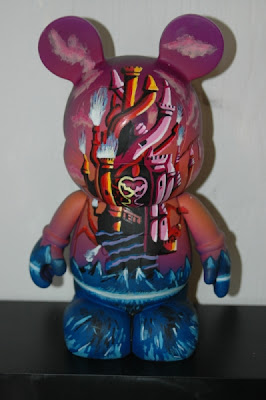 DV: You did a great job of fitting it proportionally onto the vinyl canvas. I have recently begun the early stages of a custom vinyl, and that is one of the hardest parts for me. Any tips on laying out your design before you actually attack the canvas with paint?
Rust: Attack is a great word. Show that canvas who’s boss. Before I ever paint, I always do a sketch on the vinyl itself with pencil as a guideline of where to paint. Of course before I do that, I print out a blank vinylmation template and sketch it out on paper first. 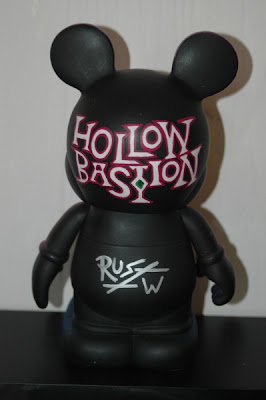 If you’re having trouble even coming up with a design, think of your favorite vinyl. Why is it your favorite? Take the list of reasons and apply them to your own design. If you’re doing a character, think about the character’s proportions and how they would best fit on Mickey’s body without becoming unrecognizable and distorted. Sometimes, with weirder characters, it involves really being creative. The Jafar chaser from Villains 1 is a great example of a creative character design. The artist thought that a skinny character like Jafar would look awful if stretched over Mickey’s pudgy body, but saw that Jafar’s turban is one giant sphere anyway and was able to relate that to Mickey’s head. Don’t be afraid of the negative space around the character, characters don’t have to stretch to fill Mickey’s body. Villains 1 Kaa and Villains 2 Yzma are other great examples. The ears of Mickey are great ways to also be creative and add a little something to the design, whether they’re an integral part of what the vinyl is representing like the Park 7 Star Jets, or a fun reference to the character like Muppets 2 Lew Zealand. Anything is better than just plain white or black. Having a creative design will make your vinyl stand out.

One awesome website I want to share is if you’re having trouble coming up with a color scheme, go here http://colorschemedesigner.com, it’s like a color theory class in 5 minutes.

DV: Find out more about artist Rust this World at http://www.rustthisworld.com or you can email him at [email protected]

On The 13th Day of Mousevent…
Episode 050 Cinderella’s Carousel