Each day this week, someone from the Destination Vinylmation staff will give their Top 10 list from 2011. The lists can include just about anything from figures to sets to headlines to personal moments. Please feel free to comment with your favorites and memorable stories from the past year as well. (Other lists: Annemarie, Claudia, Zoe) 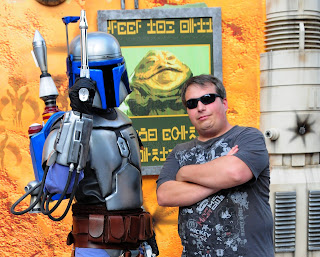 10. Inventory Issues
I Don’t mean to start with a negative, but making the end of my list are the numerous inventory issues. We all know about the Disney Store Online problems, and I will not rehash the entire debate here, but I will say we all look forward to improvements in inventory control on highly sought after LE items. The other inventory issue actually relates to the number of LE’s produced. I’m not alone in thinking Disney produces an abnormally high number of some of these less popular 9″ or 9″/3″ combos. With some of these Urbans being over 1000, they sit on the shelves forever. I guess, what should I care that Disney has a ton of inventory sitting around? But it trickles over to the hobby as a whole and even the lower LE figures become less desirable when there is so much product out there.

9. The Florida Project
I wish there were 2 huge such trading events a year. This weekend was so fun for both Vinylmation and Pin traders alike. We met fellow collectors. Got sneak peaks to future series. Traded up with our “commons”. 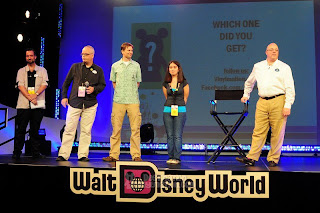 And most of us picked up more little Orange Birds than we know what to do with! What should have been the highlight, was actually the least anticipated part. The LE Vinylmation for the event should have been spectacular, but apart from the 3″ Winnie the Pooh, fell a bit short of expectations. That being said, the pins are among my all time favorites.

8. Maria Clapsis
OK, I’m a little biased here… but it’s my list! Listen to the podcast and you know Maria has been my favorite artist forever, but in 2011 she seemed to dominate the Vinylmation scene. One could argue that whoever is as prolific as Maria would be bound to have a few hits. But if our own Dee Vee awards were any indication, she had more than her share. 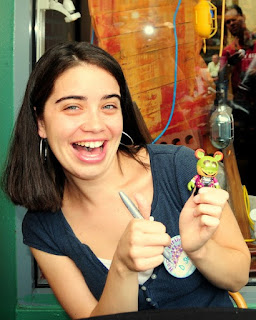 I might be missing something, but here is a peak at her 2011 resume: 9 Park and Urban 3″ including the Urban 6 Chaser (Griffin). 6 Park and Urban 9″ including the Dee Vee winner for best 9″ (UP). Cutesters Too, a complete set left in her hands that includes a variant Chaser. The Disneyland Annual Passholders Goofy’s Sky School and Ariel’s Undersea Adventure. Ariel won the Dee Vee Award for Best Overall 3″. She also designed all 7 DCL Disney Character crew members, the DCL Alaska Totem, Castaway Cay and Aquaduck. Wow, what a year.

7. Customs
This year we met so many great friends by spotlighting custom artists across the world. The art form really blew up this year and people really got creative. D-Street now regularly features customs that they commission and NOAH became a household name for collectors. There was even a custom artist show put on by Ceasar in California and wee look forward to many more. 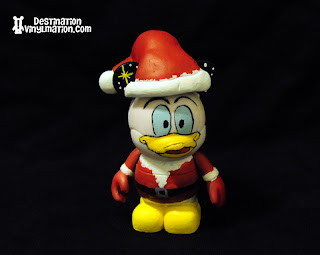 And, in a big personal step for myself, I created my first custom. A Santa Donald that I am very proud of. I can’t wait to create more and see what you bring to us in 2012.

6. Disney Afternoon
How many Fridays did you call in late or sick from work? This limited edition on-going series dominated the headlines all year long. The demand for each of these nostalgic sets far out paced the production. At each coast, collectors and sellers lined up in the early morning hours forcing Disney to actually change the way they handle releases. Rules and locations for lines had to be outlined. Bracelets were handed out in California. Strict buying guidelines had to be enforced. 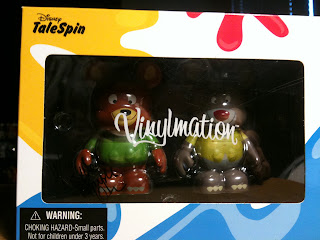 And don’t get me started on the online debacles. Vinylmation fans wore out our refresh buttons as we sat warily eyed in front of our computers for the precious plastic to appear. Then many were met with only frustration as servers crashed and orders were canceled. Some of this news overshadowed the work by Christopher Chapman who designed one of the best series in Vinylmation history.

5. The Emergence of Disney Store Artists
Nothing against our Disney Design Team artists, but it’s nice to see new blood. The Disney Store artists provided that in a big way in 2011. We saw the release of many Disney Store only products like Villains, Robots and Lion King. We also began to see an influx of location specific items… namely in NYC, San Francisco and Chicago. An already emerging network of online collectors enjoyed the chase of networking across the country to fill out their collection. More so than that, I think the Disney Artists have brought designs that are very different than what we see with the Disney group. The Lion King is one of the most beautiful sets you will ever see on a vinyl Mickey.

And Villains 2 is a very innovative take on the mold and in my opinion a perfect design choice coupled with perfect character selection. (Note: I wrote this article before the announcement of the Disney Store Light Up series, but I think that more than proves my point.)

4. The Growing Hobby
Wow, have we grown! One of the big indications for me is at the trading events. The events are for both Pin and Vinylmation collectors, but you can see the growing looks of frustration on the pin traders’ faces as the Vinylmation crowds begin to grow all around them. Maybe its just because vinyl takes up more room, but Vinylmation traders seem to have tipped the scales and passed the 50% point at these events. And now artist signings are the norm. 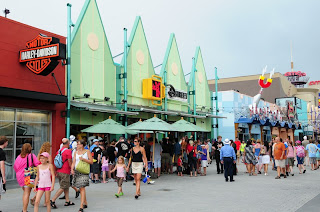 Fan websites have popped up all over the place. Twitter blows up daily with news and comments. Vinylmation mania is spreading the world over as figures and trading have shown up at Disney Stores and parks across the globe. Vinylmation are for sale in more and more stores. But with a growing hobby, comes the downsides as well. Long lines at releases. High aftermarket prices. And what pins have been dealing with for years now… dumpster dives and possible scrappers. But one thing is for sure, after 2011, it is hard to find a guest or Cast Member at WDW or DLR that hasn’t heard about Vinylmation.

3. Star Wars 1
It’s not my favorite set of 2011. I’d put The Lion King, Park 7 and possibly even Villains 2 and Pirates ahead of it, but you can’t argue that there was more buzz for Star Wars than any other set before or since. This set transcended boundaries of collecting. Vinylmation, Disney and Star Wars fans alike could enjoy this one. The release was put off for about a year, making the anticipation grow. The day of release was met with a midnight release event… complete with a D.J., prizes, decorations and an artist signing. Fans lined up for over 7 hours and braved the cold (yes, I know it’s Florida, but it was cold) and wrapped a line around Downtown Disney waiting to enter D-Street. After purchase, fans hung around trading and talking and looking the set over. And the buzz about this set never died the whole year. 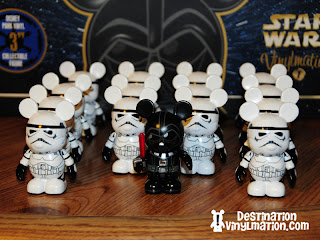 This set gave us our first variant. It gave us a rocket pack. And it gave us lightsabers! The after market prices stayed high for months… especially because the set quickly disappeared from stores. Meant to be a continuous release, demand exceeded supply and it didn’t reappear until late summer/early fall. Star Wars 1 had a huge impact on the hobby and even took home our first Dee Vee for Best 12 figure set.

2. Park Starz
What in the world is this Project Z!!?? After weeks of being teased, we finally found out at The Florida Project that Project Z was Park Starz, a completely new take on Disney’s vinyl toys. It’s not a new idea in the vinyl toy hobby, but up until now, all Vinylmation were on a Mickey mold. Now, with this new series, we will see Disney vinyl toys in the shape of our favorite characters from around the Theme Parks. It’s the perfect defined direction to take this idea. I was with many of you who were skeptical about this product. What would the quality be? Is the $18 price point too much? But as soon as I got my hands on them, I was hooked. 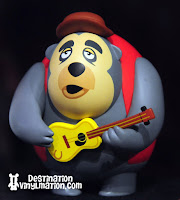 As a huge fan of the Disney Parks, even more so than the movies, most of these figures hold a special place in my heart. The quality of the figures is perfect for the price point. They have a hearty feel to them and great detail. They are still under the Vinylmation brand and add some great variation to my Disney collectible shelves. They really did break the mold.

1. The New Mold
How could this debate not be number one? It not only dominated the headlines in 2011, it dominated the comment sections on completely unrelated topics. Before Park Starz obliterated the Mickey mold, the “new mold” forever altered what our Vinylmation collections would look like. It’s been talked about a thousand times… the reasons why people dislike it and reasons why Disney changed it. 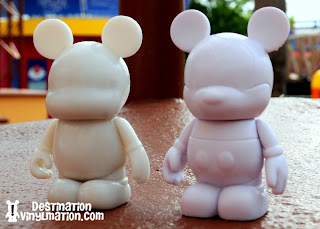 It got off to an inauspicious start. Sea Creatures was an odd set that was just a different design all together. And coupling a not so popular set with a controversial mold change didn’t win over the fan base. 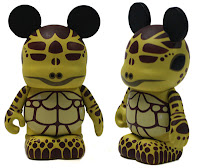 There was also the poor quality of the Cutesters Like You series. The product just was not polished. But now we have seen enough sets produced on new mold to form our opinions and hopefully get over it. You by now have made up your mind whether to still collect new series or not. All I know is that when I look at the artwork on a figure from The Lion King, Alice in Wonderland, Pirates of the Caribbean, Villans 2 or Park 7… I don’t want to go back. 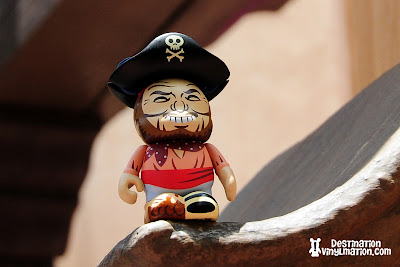 You are such the multi-talented soul. I love that Santa Donald custom!! What new talent of yours will arise in 2012? Nice article, Nick (except for #1)! LOL.

I knew you would love that one Brad. You can argue with my stance, but can’t argue it was headline #1 from 2011. Here’s to a mold talk free 2012! (I can dream, can’t I?) And thanks for the kind comments about the custom. And take note, I used original mold. I’m working on a set of 12 Donalds. Right now, Star Tours Donald. Should have pics next week.

very cool list! i especially like #1 i am also tired of old mold vs new mold debates