Update: 01/12/12 The variants have been revealed and they, with the chaser, have a common theme. 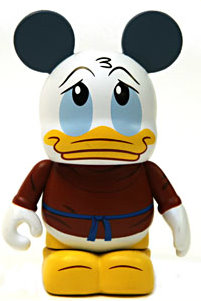 They are all missing something! Noah’s Ark Donald doesn’t have rain in the ears or drops on the head. In my opinion, that makes this figure supremely inferior to it’s regular version. The Noah’s Ark Donald with rain drops is one of my favorites. Taking the rain away, even for a variant, takes away the sense of this figure. It is also interesting to note that this Donald’s 2nd variant (Park 6 Wet Paint Donald). Here is the second variant… 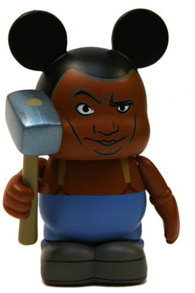 John is showing off for the ladies as he goes shirtless in the variant. It makes sense, but like many variants, not one I’ll go out and search for. What are your thoughts on these variants?

Original Article: Please leave your thoughts below… here’s mine. Character selection is phenomenal! Love the mix of classic and computer animation with some shorts and TV tossed into the mix. It’s also a nice 50/50 mix of main to supporting characters. Overall, after seeing some recent releases, I expected a tiny bit more in the detail. I think most of these are great designs, but I’m not sure they stand up to the sets we saw released in late 2011 and will see in early 2012. That being said, most are spot on capturing the film character. The artist star of this set is Casey Jones. He designed 5 of the 12 known figures and 3 of my personal favorites… Donald, Sebastian and Jose Carioca. He also used the ears better than any artist in this set. The inclusion of Kim Possible, a TV character, makes me excited about future set lists. Disney talks about 2 variants… what do you think they will be?

I think the chaser is that… not quite sure….

You’re right about Kim Possible, it’s not even like using the hair to frame a smaller character’s head is a new thing. That’s just an inexcusably bad design.

A lot of these designs are actually pretty lazy, they’re just the generic stretched out look that the Disney Parks team always does for characters. Other than a few, there’s really nothing special about this set. There are certainly no pieces that are must have or blow me away with creativity.

Disney should leave all character sets for the Disney Store artists.

I like the character selection on this set. The simple designs really capture the essence of the simple animation films most characters came from. Jiminy actually fits the NEW mold really well. Wish they had included a red umbrella accessory. Being a Three Amigos fan, I really like the Jose Carioca design. The sombrero is very cool. Chicken Little’s head and body size should be reversed, but it works. Wish they could have figured a way to put the red “comb” on his head. Tigger, Sebastian, and Donald are nicely done. Kim Possible’s hair is weird. They needed to apply… Read more »

I hate to nitpick but the three amigos is a 1986 movie with steve martin, chevy chase, and martin short directed by john landis.

I meant to say Three Caballeros, however, I did like the Three Amigos too. LOL.

Tres Caballeros* lol if you want to be nitpicky

What I wanna know is where’s Robin hood? Or Hunchback of Notre Dame? Just sayin…

Hunchback is in Animation 1.

No, still not interested in A2. Well, except Donald, Jiminy and Jose. The rest just does not look good IMO. Especially with a repeat Tink, a Kim Pudgible or designs like Baloo or Dopey. Will only pick up a combo topper and hope it’s Jose. Or Donald. Or the chaser (here’s hoping the chaser is a excellent design!).

possibly dopey with diamond eyes or baloo from when he goes to see king louis to save mowglie (yknow the skirt and hat thing) :D
DM

Chaser is now approved that the chaser is HEADLESS HORSEMAN!!!!!!!!!!!

I agree that the variant Donald should have been the regular issue with Raindrop Donald being the variant. John Henry’s reg and variant designs could go either way as to which would be the better variant. Unless they pack the variants with a lot more regularity, I don’t see them being “chased” as much as past variants. Maybe just the hardest core completist need them for their sets. A pant-less Chicken Little or Jose with a large Sombrero accessory would have been more desirable IMO. I may actually buy a Jiminy. Jiminy being a smaller character, in “real” life, fits… Read more »

Where can we buy these??!?!?! My local Disney store NEVER has any left and I can’t find them online. Anyone been able to find them yet?

I got the donald variant with no water and comes with a little sword or knife. But i dont see any photo who show the sword .

Send us a pic!

HOW CAN I SEND YOU THE PIC?

DONE; I want to know if it is some kind of packing error. Or someone got the Donald with the sword to. Let me know if you recieve the photo.

I blindboxed the donald variant at WDW in April and mine didn’t come with a sword or knife!