Contributor Mike Boon talks about Disney’s news blind box product, Cutesations. This plush mystery series released on Friday, January 6 at the Disney Store and online for $6.50 per box or $79.50 for set plus mushroom display. Read Mike’s review below and check them out here. 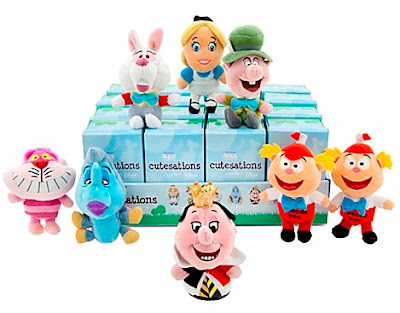 Did you love the Alice in Wonderland Vinylmations series but wish they were, well, a lot softer and more traditional in shape? You’re in luck because Disney is now offering a new 5″ plush series called Cutesations, now available at the Disney Store. Alice and the Wonderland gang make up the first Cutesations series, no doubt with more to follow.

These are a treat for rabid Alice fans. It’s nice to see Caterpillar, Tweedle Dee and Tweedle Dum in there along with the usual suspects (Alice, Cheshire Cat, Mad Hatter, the White Rabbit and the Queen of Hearts). The designs are cute, though I would expect some odd disfigurements on things like the Mad Hatter’s nose in such a small plush and the Queen should have looked a little less cheerful and more sinister. 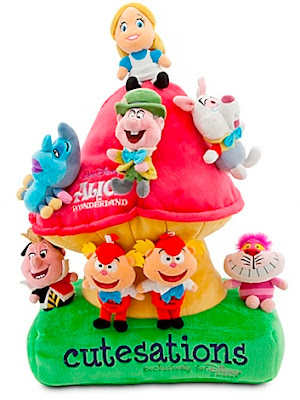 Ultimately though, I do wonder about appeal of the series as a blind box offering without any suggestion of a chaser and unknown options for trading. If you really wanted whole series, you may as well splurge for the full set of 8 with mushroom pillow.