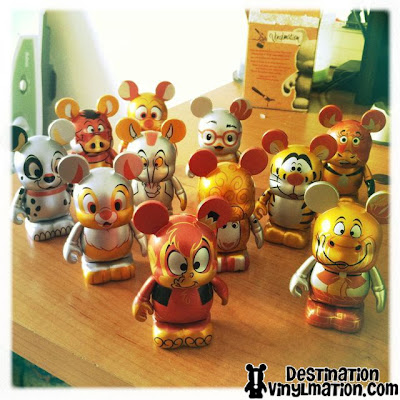 I have a pretty sizable Vinylmation collection, and I get most of it from the Disney Stores and Disneyland in the typical boxing fashion. But ever so often I have to head over to Ebay to catch that ever elusive and special variant I just can’t seem to get my hands on, or an unobtainable set stateside. Later this year, I’m headed to Japan, and Tokyo Disneyland/DisneySea obviously, to check out what they have to offer in the Vinylmation world, and the trading scene in general. I planned to pick up some of the Zodiacs there, but when I saw an almost complete set for a steal on Ebay I had to jump on it.

I’ve been wanting these for months, ever since they were unveiled last year. And now that I’ve got my hands on them I can say they are without a doubt one of the best Vinylmation sets ever, in my opinion (if not THE best).

The color scheme is unlike any other set we’ve seen. The gold/silver/bronze scheme is slick and gorgeous. Other than the jet-black outlines used on the details, these are the only three colors used on the set. It keeps them cohesive and fits them together as a set perfectly. I love the choices they used for these figures. They are:

Here’s a helpful graph in case you’d like to figure out your animal: 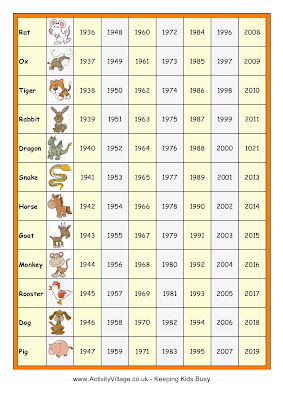 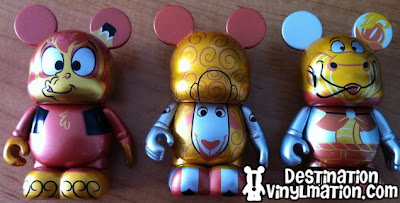 Abu is my favorite in the set. His face is captured perfectly on the vinyl, his expression is great and it looks like it was taken from a moment in the movie exactly. I have to mention the detail and model of each character is captured perfectly on every single figure. Sir Hiss is a great, obscure choice (anyone who has read any of my articles knows I love the obscure choices best!) I love how they chose to include his basket as the feet. I think the best design is the sheep from Toy Story. If you turn it to the side, there are two more sheep on each side, designed so the arms are their faces. Amazing! 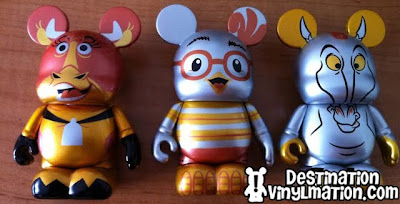 My next three faves are Maggie, Chicken Little (my year!) and Pegasus. Again, the colors look so unusual and fantastic. Maggie will be rare in particular, as there isn’t much merchandise of her (with reason). That movie wasn’t very great, but no one can argue it didn’t LOOK fantastic, and this figure is a great example of that. Love the Chicken Little figure, and Pegasus’s expression is great. 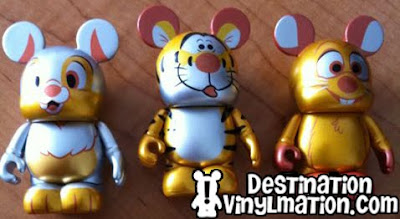 We finally have a Thumper figure! Not much to say about him, or Patch even.. they look pretty great. I normally might complain about choosing Patch or even Pumbaa again since we already have them in other sets (and there are so many other dogs and even pigs to choose from) but the set is so beautiful and they look so unique I can’t bring myself to care. I prefer this Tigger’s face to the Animation 2 Tigger, but they are both great for their own reasons. And Remy is cute… I don’t think I’d seen him (or remembered him if I had) when I made my own custom of Remy, but I anticipated in that article that they’d probably just do him facing frontwards and we might lose a bit of his “rattiness” this way. I still think this, he looks a bit more like a mouse here than a rat. But again, the figure’s so adorable I don’t mind. 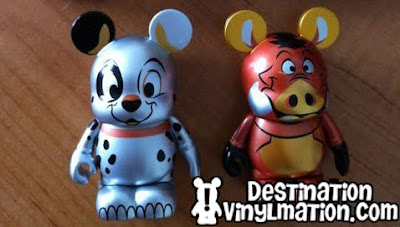 My FAVORITE feature of the set is the detail on the back of each figure: a footprint with (I’m assuming) the Chinese character that denotes each year! The detail in each footprint is awesome, here you can see Abu’s monkey foot, a sheep’s hoof print, and Sir Hiss’s slither tail. Each character’s footprint is equally awesome, and unique to that specific character. If there’s anyone out there who can read Chinese and these say something different, please let us know! 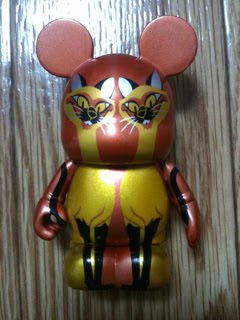 I haven’t been able to get my hands on the chaser, which is Si/Am from “Lady and the Tramp”

I’m not sure of the significance of this choice for this set, but I love it. Anyone care to enlighten me?

Overall, a fantastic set. I think they could even do more series with this idea: Just to name a few ideas off the top of my head,

Just some thoughts. Again, I like these obscure choices.

What characters would you use for a Zodiac set? Leave a list in the comments.
Will we see a Japan Zodiac Series 2? I hope so!

Also- if anyone can help me complete my set with a Si/Am or Elliot, please tweet me @AdmiralAkbrown. I’ll do custom work for these! ;-)

There’s some really creative designs in this set that I didn’t realize from the promo pictures. Thanks.

Easily one of my most favorite sets for a LOOONG time. Great creative designs, the paint is fantastic, just a really great cohesive set. Loved the write up. Thanks!

Was not going to get any but with better pictures and getting over the colors I might get a few. Great Review.

I love and want these! Ebay just doesn’t have that many. Was going to buy thru the Japanese disneystore.com and ship to friends in Japan but it seems they are out of stock now. How can we talk Disney into releasing these here!!! They are awesome!

Besides park 1 this is my favorite set. I love the colors I love the design and all the little details. Thanks for a great article. Here’s my list
Rat- Gus (Cinderella)
Rabbit- Oswald! (Oswald the lucky rabbit)
Horse- Maximus (Tangled)
Dog- Lady (Lady and the Tramp)
Pig- Piglet (Winnie the Pooh)

Those are great choices, I love the Oswald choice! (Also THANK YOU, Maximus, I couldn’t remember his name. That’s another great one!)

Okay I’m going to go through and give a couple for each year:

[…] Japanese Zodiac Review by Annemarie Again, I like these obscure choices. What characters would you use for a Zodiac set? Leave a list in the comments. Will we see a Japan Zodiac Series 2? I hope so! Also- if anyone can help me complete my set with a Si/Am or . […]