Sorcerer’s of the Magic Kingdom

I’m not sure if I’m supposed to be sharing this with you. You see, I’m secretly a sorcerer. Yep. With the help of my Disney character friends I can actually cast spells that defeat some of the most notorious villains around. Don’t believe me? Why just yesterday I took down Scar and his Hyenas and even stopped Cruella Deville from stealing a valuable diamond. But, I do have one small problem, my powers only work inside the Magic Kingdom. 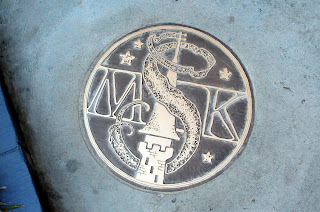 It all started when I showed up yesterday with my friend Austin just to take pictures of some Vinylmation around the park. When I was quickly whisked into the Main Street Fire house where they asked for my pass then swiped it through this machine. I thought they were onto us for sneaking behind the ropes inside the Pirates queue line to get some cool photos. But instead, I was handed 5 amazing playing cards, a Sorcerer’s Key Card and a Sorcerer’s of the Magic Kingdom map. This is the newest attraction at MK and it is included with park admission… and you get to keep the cards! I’ll tell you all about the game itself, but these cards are fantastic and I’m calling it right now… they WILL become a collectible. 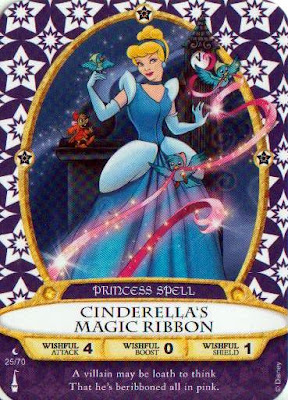 The cards have beautiful artwork depicting different Disney characters and they let you know what spell can be cast with that card. The cards also have attributes assigned to them. All this will make sense soon, but just know these cards will be fun to collect. Disney was brilliant in actually numbering the cards as well. 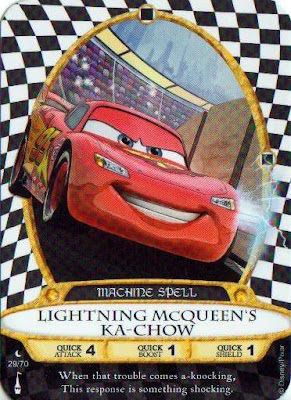 There are 70 in all. Your pass will only let you play once per day and the cards are handed out at random. So you can see the replayability and trading possibilities. So fun!

Before I was sent out on my mission, I was taken to a video screen at the back of the Fire House where I was given a brief tutorial by Merlin from Sword in the Stone. I think it was a great choice to use this under used character as the main protagonist in the game. I was then sent to my first location. 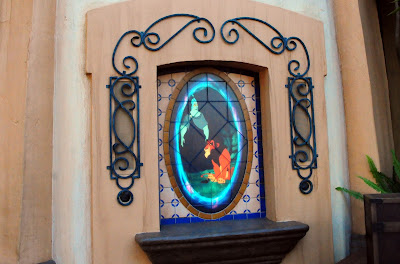 Now, it must be noted that the game is still in a testing phase. Like any Role Playing Game (RPG), I would expect the need to use some strategy as to what spells to use for best effect on a particular enemy. However, this level of strategy was not “turned on” today. I was told there would be three levels of difficulty guests could choose. All games were set on easy today, where strategy was not involved. 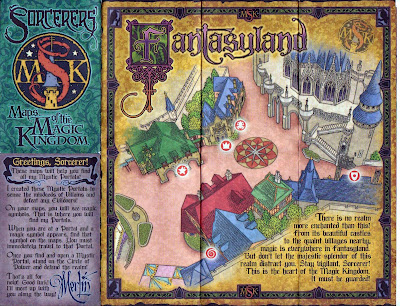 As seen on the game map, there are 20 portals, 5 in each of the 4 playing areas. Main Street USA, Adventureland, Fantasyland and Liberty Square/Frontierland. The portals are flat video screens that interact with you and your cards and are well themed as to fit in with the location where they are placed. Some were very well posistioned, like this one inside the train station that was hidden in the departure/arrival board. 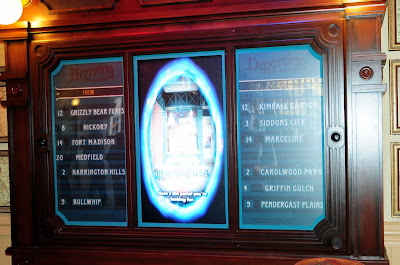 And this one tucked inside the fireplace inside the dining area of Tortuga Tavern. 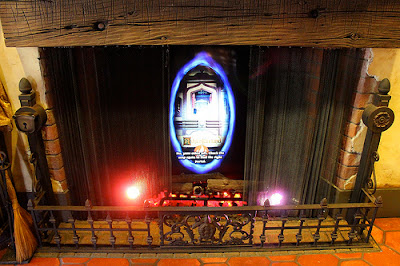 There is only one so far I disagree with. For the most part Imagineers did a great job not destroying anything, but this one inside The Little Mermaid Emporium window display distracts from the fun window displays we all know and love. 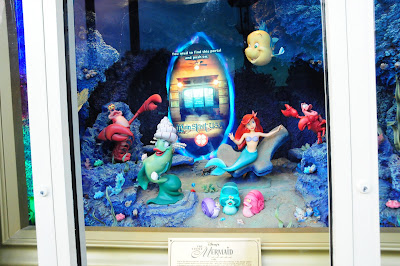 In concept, the comparisons to Kim Possible at EPCOT are unavoidable, but the technology is more like that of the Midship Detective Agency aboard the Disney Dream cruise ship. Sorcerers is played like the Midship game and has the interactivity of Kim Possible but varies in some important aspects. Kim Possible has environments that actually move. Water sprouts, characters move into view, etc. In Sorcerer’s, all the actions are video based. However, there are some well timed lighting effects like when a spell hits the villain. And in some locations there are small moving parts like curtains that draw back to unveil the screen. I could use a few more moving parts, but the more video based it is, the easier it will be to update the experience every few years. Let’s just hope they do. 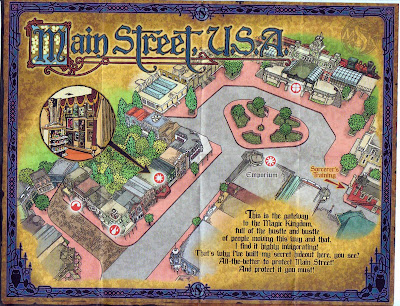 Each land contains a number of different quests. For example, in Adventureland we played through a Lion King based quest but there is also Aladdin and to my amazement and great delight… Emperor’s New Groove! Fantasyland has Sleeping Beauty, The Little Mermaid and others. So unlike Kim Possible, you don’t have to hide your eyes and cover your ears while waiting in line to get your own experience. Because mostly likely you will have different scene play out. And with all the lands and movies in use, the game is remarkably replayable. Not to mention the idea of your pass storing your info so your spells become stronger the more you play. Not sure how that idea plays out yet. 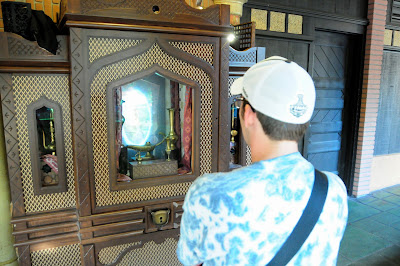 As I said, the game itself was very lacking on this easy setting, however kids could not be more spell bound (pun not intended) by the interaction. They just gathered like moths to a flame to watch guests flash cards in front of a screen and make things happen like magic. But having not experienced the real game itself, what stole the show for me was the animation and story lines. 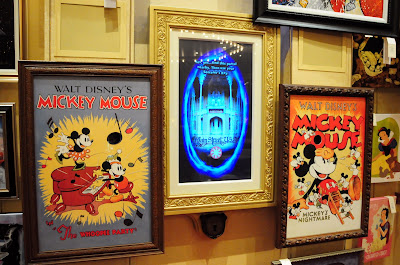 Each quest had it’s own story line that made sense based on the characters involved. They also had their own animation style. While Lion King was all “normal” animation, 101 Dalmatians was a stylized still frame montage. The drawings were beautiful and in all cases the voice acting was top notch. The over-riding villain causing all the ruckus around MK is Hades from Hercules and even he takes on different personas in the quests. 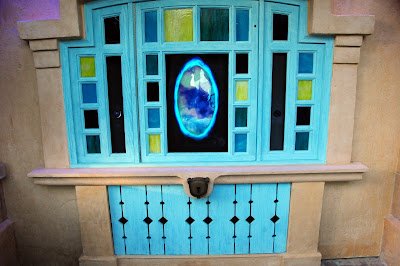 Although being an RPG, this is a linear game. Meaning you are told exactly what portal to go to next until your game is over. But even though you don’t have that much choice, and your scenes are laid out ahead of time, you can actually loose battles on the harder difficulties. I can’t wait to see exactly how the attributes on each cards can be strategically used to advance your quest. This is not a game you will always win… and I love that! It’s a great twist on a Disney Parks product. 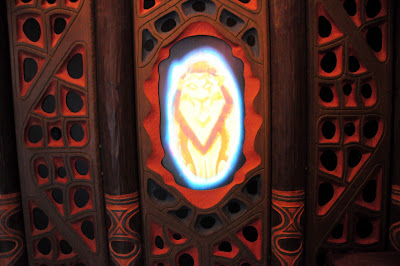 If you accidentally head to the wrong portal and swipe your card, you are directed back on track. Frequent park visitors should recognize the next location based on the picture on the screen, but each portal is also associated with a symbol that matches up with the map. 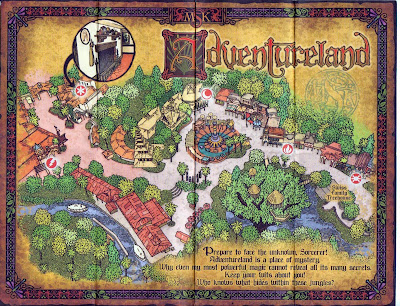 The technology worked rather flawlessly for us. It all starts by swiping your key card in front of the lock at each portal. This “turns on” your screen. Your key card has an embedded RFID chip that tracks your movements and supposedly achievements. Not sure how long term this tracking is, but it would be cool to be able to keep track of your personal all-time stats. Right now I’ve been told the game stays active on your key card for one week allowing guests to conveniently pick up were they left off over the course of their vacation. 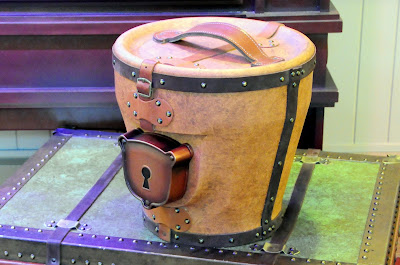 The card worked well, but you do need to hold it right on the lock and it may take a couple swipes. Spells are cast by holding a spell card straight out, face forward in front of you. 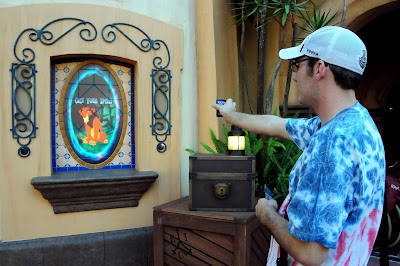 At each portal you can see a camera on each side of the screen that recognizes your card and triggers the correct spell. This worked every time… as long as you were standing on the “Circle of Power”. 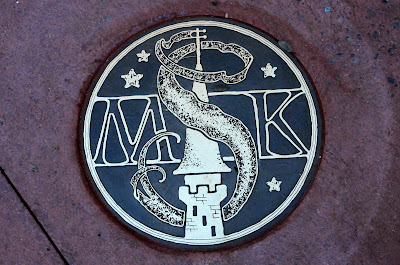 A logo that sits about 5 feet away from each portal. When we were just a foot to the side, it didn’t recognize our spell and we were attacked. 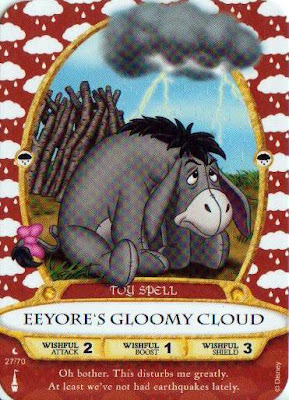 The individual spells are unique to each character card. Bolt’s is really cool. 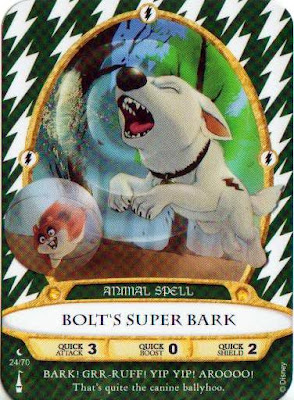 Play his card and the dog’s head appears as he Super Barks at the villain. Hold up the Headless Horseman and a flaming pumpkin head is thrown. 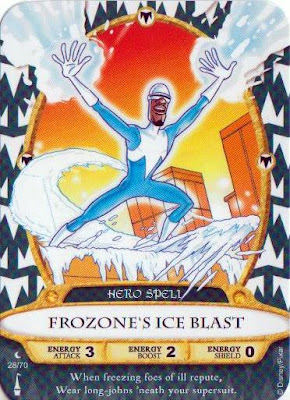 The animations a really great, however the video transitions are just a notch below seamless. I would compare it to a DVD menu screen that plays a loop. You know how there is often a little hiccup where you can tell it just looped? 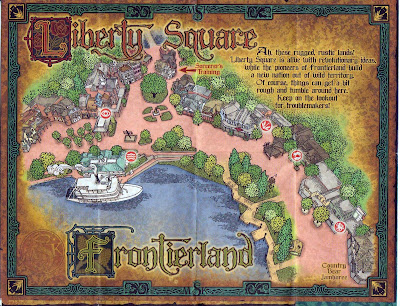 I think the portals are placed in well planned positions as to not create much of a traffic issue, but there is a tiny noise problem. It seems the interactions are much louder than Kim Possible and you can hear everything as you walk past. Although I am all for this level of interactivity, from a purists point of view it does distract a bit from the well thought out sounds of each themed land which is a trademark of the Disney Parks. Not sure how this can be overcome except to bring the volume down a bit. I thought of wireless headphones, but that would drive up the cost severely for Disney in the production and upkeep of something like that. 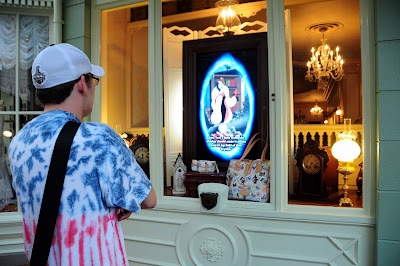 Overall, this is a perfect move toward heightened guest interaction at the Disney Parks. It immerses the guest in a fun game and offers an experience in between queue lines. I often feel like I’m at home at Walt Disney World and have a personal stake in the place. A game like this just reinforces that feeling. I’m interacting in a new way with the park I know and love and I have a stake at keeping it safe from villains! The stories play out well, the animation is top-notch and as long as the higher difficulties offer a challenge to older players, this will be a long-time hit with endless possibilities.

Previous
NFL Series storming the fields on 1/27 and 2/3
Next
Romance Blooms in “The Magic, The Memories, and You!”, Summer Overlay Teased