Saturday was the release and artist signing for Furry Friends Vinylmation at the Disney Store in South Coast Plaza Mall! I had such a great time at the event. I was working so I wasn’t able to buy any figures until I got off work BUT don’t worry my Grandma came with me yesterday to the event (she loves the Vinylmation community, they all call her grandma haha) and she surprised me and bought a couple figures and got them signed for me! She got, 2 Trustys and Patch, then went into the line and traded a Trusty for a Max! (Yay go grandma!) And by the way, that was her first ever trade haha!

Now let’s get to the event! I got to work at 7:45 AM and there were about 40 people in line! I saw so many familiar faces as I made my way inside! We had a large fixture set up in the front of the store with trays and trays of Furry Friends! We ended up opening the store an hour early around 9:00 AM to let everyone buy their trays to get in line for the signing! 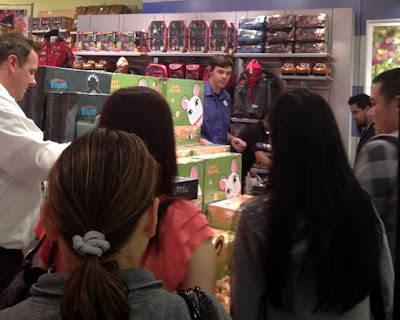 The first guests making their way into the store to purchase Furry Friends!

While everyone was waiting, the Home Base Disney Store team brought our store a present! My manager told Michelle (my Vinylmation loving co-worker) and I that we would get the honors of using our brand new 24 Mystery Trading Box!! And we would get to keep it in our store! Yay! I was SO excited first of all to see the trading box, and also to be able to trade with others! I am usually on the other side of the trading box so I was way too excited about this. 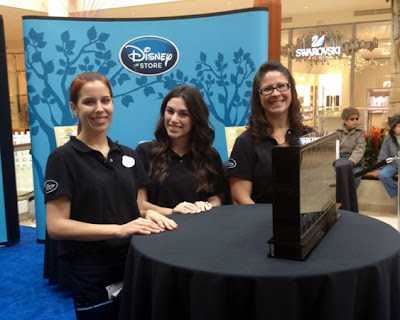 Ashley, Michelle and I waiting for everyone to come trade with us!

Finally the artists arrived and everyone got their figures ready to go! The artists on hand at the event were, Jim Valeri, Gerald Mendez, Enrique Pita, Quincy Sutton, and Matt Chittavanichprapa. Quincy and Matt are new to the Vinylmation world and I was very excited to meet them! 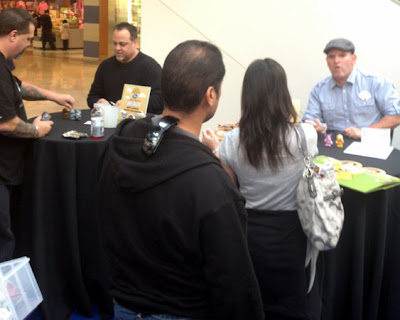 Jim and Enrique signing for fans!

The event went awesome! Each artist was constantly busy chatting with fans, taking pictures, talking about the series, signing figures, and sketching! 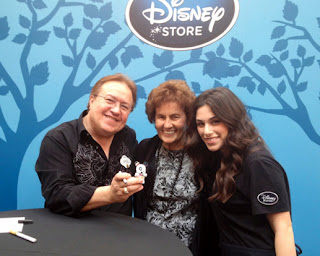 My Grandma and I getting Patch signed by Gerald Mendez!

One of the artists in particular, Matt Chittavanichprapa had a great idea. He had only designed one figure for the series, his FIRST EVER VINYLMATION Marie! In my opinion, Marie is definitely my favorite from this set. She looks absolutely fabulous! Since he only had one figure to sign, he brought out his sketchpad and starting sketching pictures for fans of Marie! It’s funny because I was worried he would have a short line since he only had one figure but he had the longest line that even went past the 1:30 end time of the event! 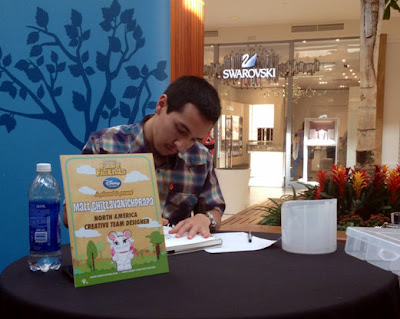 Matt sketching a picture of Marie for a fan!

Luckily I got off work at 1:00 so I was able to go into the store and buy 2 blind boxes to get them signed. I got Marie and Oliver! I was so excited because Marie was the one I wanted the most! I went to Matt’s line first so I could get Marie signed and a sketch!

Matt is great! While he was sketching a picture for me I asked him a lot of questions about designing his first ever Vinylmation! He said he was thrilled how the figure turned out and he was ecstatic they were able to make Marie’s bow out of ribbon! He joked and said that when he presented the idea for Marie they told him “we will see what we can do” and he assumed that meant “no” but to his surprise they were able to pull it off and it turned out fantastic!

I also asked him how each artist is assigned which figure to do. If they come up with the character themselves or how that whole process works. He told me that usually there is a team who comes up with the vision for the set, and then they assign each artist a character and then see what they come up with. I asked him if he was excited when he got assigned Marie. He laughed and told me that he didn’t go to work the day that the figures were assigned, and came back the next day and was told he got Marie. Now getting the girliest figure in the Furry Friends set wasn’t going to stop him from making it the BEST Marie Vinylmation. He told me that he looked at the other Marie Vinylmation and wanted to make sure it looked nothing like the others, which is why he opted for the extra large pink bow and I think he nailed it!! He was such a sweet guy and talked to me for a good 20 minutes, I’m really looking forward to seeing more from him in the future! Oh and you better believe I begged him to suggest a Princess set.. We will see what happens! (haha) 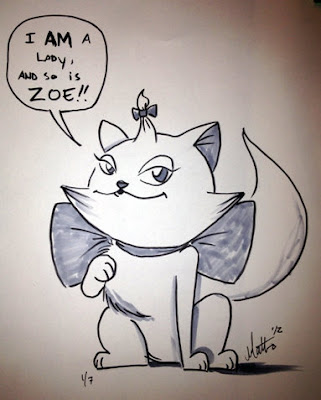 The picture that Matt sketched for me!

Overall, I think the event was a huge success! Over 200 people showed up, and the artists really had a great time. I was sad to read when I got home that many people were having problems with their set, such as scuff marks, fingerprints, and bad paint jobs. I checked out my figures again and they all seem just fine. Didn’t notice any mess-ups, or dirty spots but maybe some people got a bad batch.

I had a great time at the event, seeing all my Vinylmation friends and familiar faces! I hope everyone enjoyed themselves. 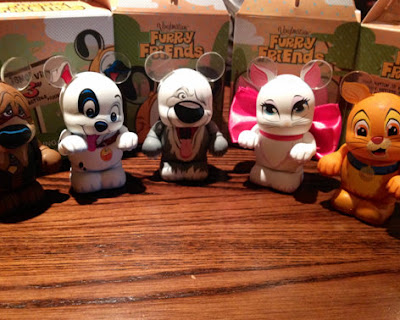 Great article, Zoe! Glad to hear you were not a victim of the Furry Friends Debacle. I do have to admit that Marie is my favorite out of this set as well because, as you know, I am a big accessory guy. I just love the cloth bow. It opens up the door to a lot more possibilities as far as accessories go. If Matt Chittavanichprapa continues to make great accessories like Marie’s bow he might become my second favorite artist after Casey Jones. (I also secretly envy you for having such a great job.)