Park 8 is the second set in a row dedicated to the 40th anniversary of Walt Disney World. Great idea for WDW fans like me, but not a favorable plan for some Disneyland enthusiasts. But with four parks, 2 water parks and a ton of resorts to pull ideas from, there are no shortages of designs specific to Walt Disney World and it worked well. It also opens up the door to theme future Park sets to other resorts around the world… an idea that I would very much welcome. 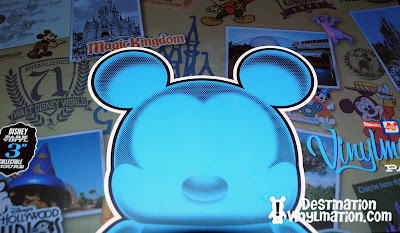 The breakdown of this set gives us 4 figures from Magic Kingdom, 3 from EPCOT, 1 from Studios, 1 from Animal Kingdom, 1 from a resort, 1 from a water park and 1 generic WDW. We were also given 5 “accessories”… 2 of which are brand new ideas to Vinylmation. An artist break down shows three artists giving us 3 figures each. 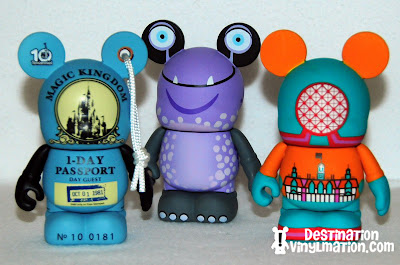 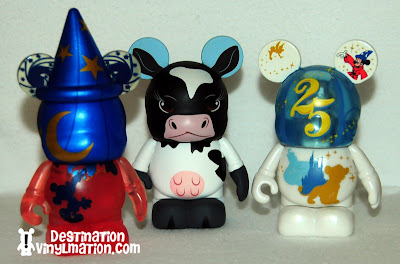 And Casey Jones did these. 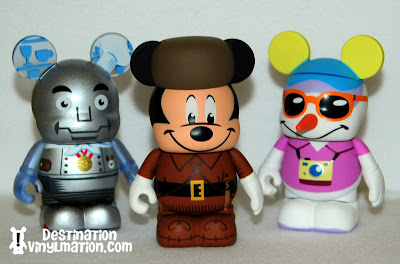 Overall, this set has a perfect selection of different designs. From popular attractions to niche characters to logos and even a park ticket, it has something for everybody. The production value is also top notch. As you will see, there is a lot of little detail across this set. As evident in the small, yet detailed logo of the Kilimanjaro Safari on the back of the truck and this… 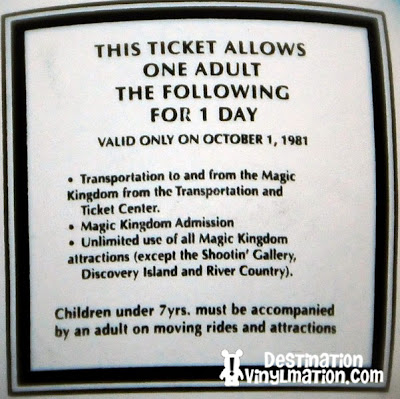 That is the back of the head of the MK Park Ticket. It was one of the biggest surprises once the set was in hand. How geeky is it, but wow! I love that Thomas actually printed the writing on the back of the real ticket, onto the vinyl. So while overall, I give this set very high marks, and will break it down figure by figure, the first figure I will talk about is to me the biggest disappointment. The chaser from this set, while not my least favorite, is my most disappointing Park Series chaser. Only because what it represents, means so much to me, I had hoped more attention to detail would be payed to it. And the funny part about it, the figure has more actual detail than I think it should. Here it is. 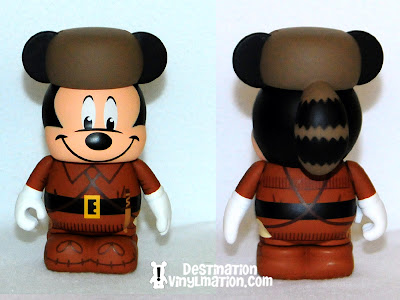 Fort Wilderness Mickey was designed by Casey Jones. But you probably already knew that because you have seen this design before. His body is practically identical down to the detail of Casey’s brilliantly designed Davy Crockett figures. 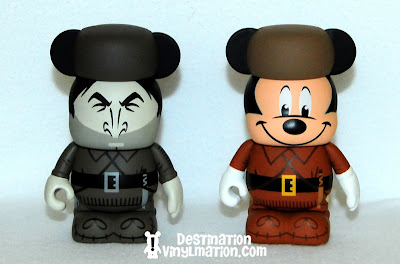 If you follow DV closely, you know that Casey’s Davy Crockett is one of my all-time favorite figures. And I also defend the idea to produce both a 9″ and 3″ version with identical designs, just a different color tone. And honestly, my problem is less the copying of an existing design, than the fact that the Park 8 chaser is not the Mickey from the Fort Wilderness logo. Take a look at the Mickey on the official logo from Disney. 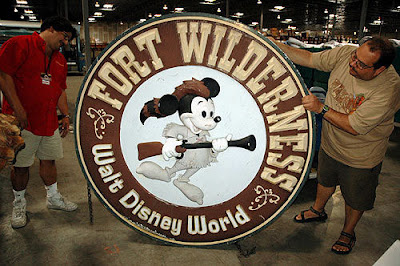 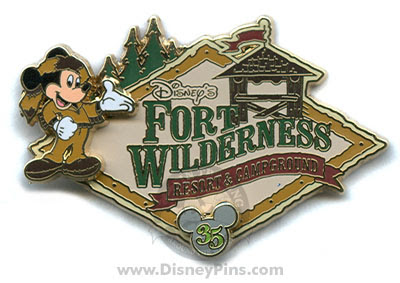 (picture from DisneyPins.com) When  Disney released this commemorative pin, the correct Mickey was portrayed.

I don’t think I’m splitting hairs to say that our chaser doesn’t look like the Mickey on the logo. Like I alluded to earlier, the Mickey on the logo has much less detail to it and is a different kind of outfit. From color to no belt to the shoes and even the color should be more tan than brown. 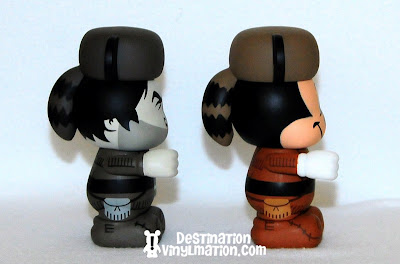 The hat has a slightly different design… look closely at the black bands. But again, its not the copying of a pre-existing design that bothers me. I’d like to know if this decision was the artist’s, because I wouldn’t be the least bit surprised if the higher ups who make the final decisions wanted to just push this design through instead of taking the time for a redesign. 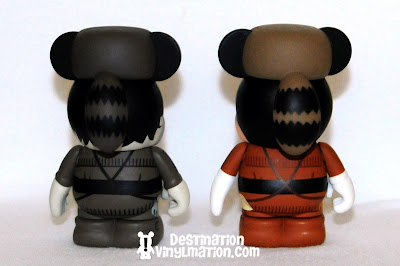 Now, please don’t call me a hypocrite for liking both the Park 7 and Animation 2 Tinker Bell designs. There is a pointed difference between what each figure means. One is the movie version and one is the sparkly version that flies above MK. But to me, this chaser is supposed to represent the Mickey we see on the logo, and it just doesn’t. Don’t get me started on no riffle. 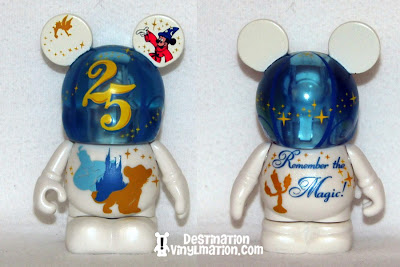 The 25th Anniversary Logo was designed by Maria Clapsis. The figures fit well on to the mold and I agree with the decision not to detail Genie, Simba and Lumiere’s faces. 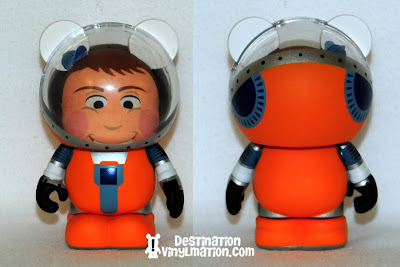 EPCOT’s Sea Base Alpha by Eric Caszatt is a perfect niche item. The arms almost look like robots and the bubble has a great paint job. 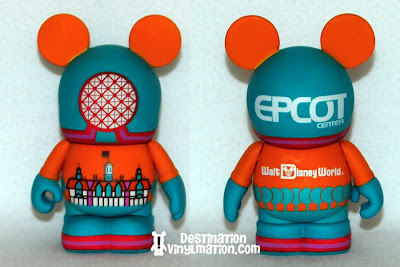 EPCOT Center 82 is a Thomas Scott design that is perfect retro. 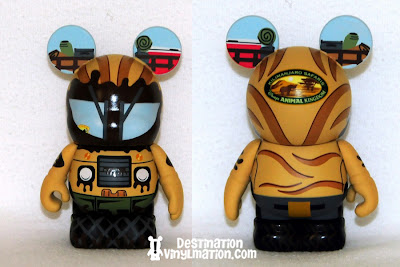 Eric Caszatt chimed in with a rare Vinylmation ride vehicle! The Animal Kingdom Safari Truck has so much detail and an amazing looking logo on the back. It also has a no mud variant version… but why would you want that? 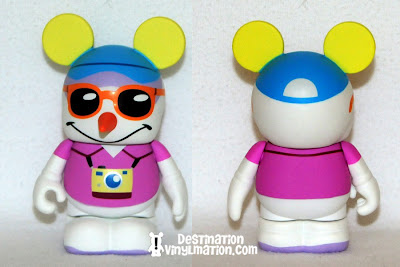 Blizzard Beach is the lone water park represented. And it is done perfectly by Casey Jones with the tourist Snowman. 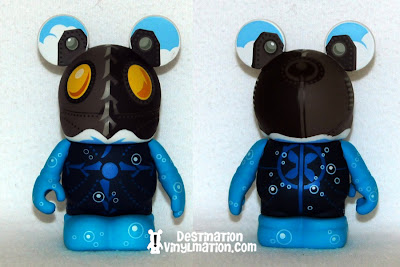 New to Vinylmation, but not to designing at Disney, Jon Bishop has given us a brilliant 3″ Nautilus from 20,000 Leagues Under the Sea. I so enjoy the under water and surface transition. Here is a sample of Jon’s other work: 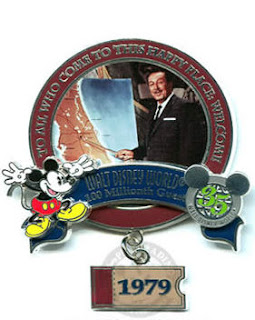 In addition to pins, it seems he worked on some of the artwork for Star Tours and big pin trading events like Trade City a few years back. 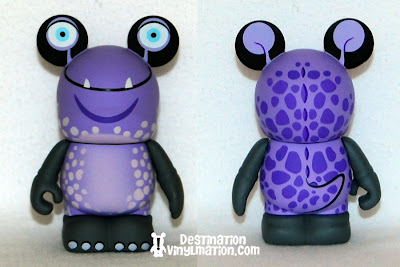 Not my favorite figure in this set, but my favorite choice for a subject matter… it’s Buddy from the Monsters Inc. Laugh Floor designed by Thomas Scott. 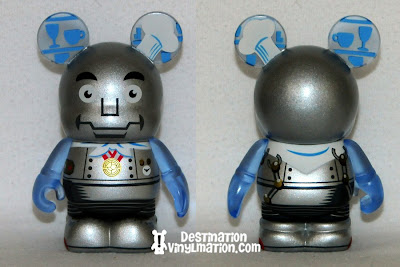 It’s about time we get a Horizons figure (not counting Park Starz). Casey Jones chimes in with the Robot Chef. Love the ears. The bottom of the figure doesn’t exactly mimic the real robot, but in visualizing trying to get an exact copy of the real robot onto the mold, you would probably pull other features out of proportion. 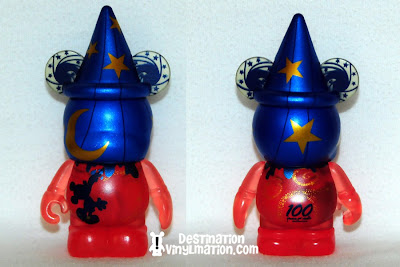 How about 100 Years of Magic? We have a few sorcerer caps now, but this one gives us a fresh take. Some would argue use of brim on the accessory hat, and maybe that shouldn’t be there, but the design from hat to head lines up perfectly… and you can’t beat that. 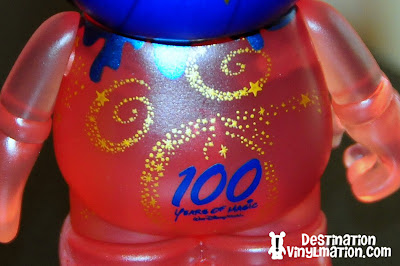 Maria Clapsis gave us this one. The back also has a cool Mickey head star swirl. 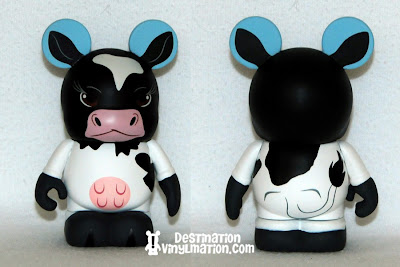 Maria also designed Minnie Moo. One of those obscure characters, but she did a great job on the design. 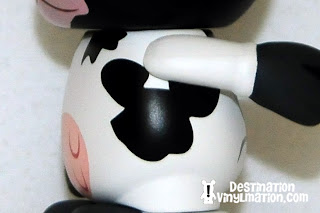 And of course got the familiar shaped spot on the side. 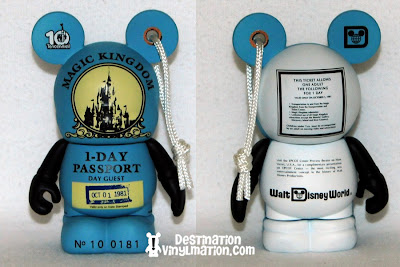 Then, what I think is the set’s crown jewel, the MK Park Ticket from 1981 by Thomas Scott. We were wondering if Disney would do it, and they did. Punching a hole through the ear and tying a string in it. The printing detail on the front is simply spectacular. But its the writing on the back that ices the cake. 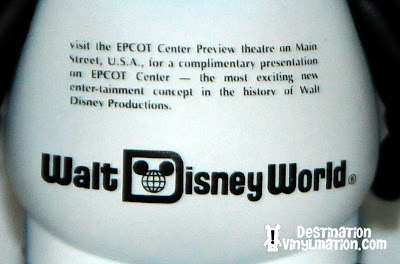 I can’t wait for EPCOT Center!!!! In my book, this set is an instant classic. Rivals Park 4 and 7 for my top slot. What are your thoughts?