Update: 03/20/12 @Kidada4Disney says release has been delayed to a date TBD


Update: 11/5/11 When we asked Kidada4Disney why Jiminy doesn’t get candy. She responded: “Because he is the voice of reason.” Wow, this combo makes more sense than we thought. 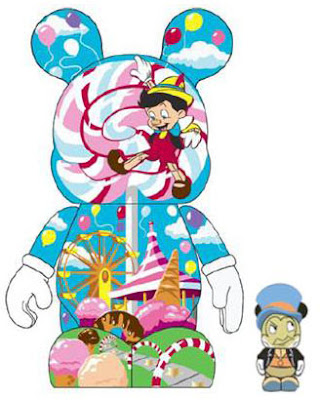 After the release of the Peter Pan Kidada, we finally get a chance to see the concept art for the Kidada that was teased at D23 back in August. This piece features Pinocchio on the 9″ and Jiminy Cricket appears to be on a Jr (thanks VMKingdom). According to vinylmation.com this piece will be available in early 2012. The price of the last set was $74.95 and it was a LE of 1500, but it was with a 3″ not a Jr. You can still get them at the disneystore.com so I wonder is the production run number will come down so there’s more demand. The first 9″ Kidada sold out instantly with a run of 500.

It looks like Jiminy is on a figure with no candy (poor guy, Tinker Bell got a candy bar) and it looks like he might come with a hat! Coolness….

I guess a Jr makes more sense size-wise, which I’ve always said I wish they’d pay attention too. So yey!

What do you think of this piece? Too sweet? Does it make your teeth ache?

This new kidada is sweet,(no pun intended) its one of the best special release I’ve seen. I missed pout on the, did not get the second, but, this will DEFITNELY be in my collection. Also I’m not trying to be a know it all but, this is the 3rd kidada not the second. See below…

Thanks J. Nice catch. When we wrote the blog post title, we did it quick and thought this was a 9/3 combo. So the “2nd” in title referred to that. When we edited the post to reflect it was a Jr., not a 3″, we neglected to change the title. But I agree with you, this is the sweetest indeed!

its making me so hungry! all of the kidada vinyls are great, ill be first to have this. im also happy with the 9/3 combo. anyone know where i can purchase the first minnie mouse vinyl? please post

@stardancer. At this point the only place is probably EBay

If anyone is looking for any specific vinylmation feel free to email us off of Mousecollectears.com our email is in the contact us section! Tons of items are out of stock but we still have so many!

@Lynn…. Dont you think its a bit cheesy to promote your site on another vinylmation site? Just saying.

i have kidadas other vinyls and im for sure getting this one. NO MATTER WHAT!