I’m sure, as a Disney fan, you know the legend of the Sherman brothers. They have given us much of the music that will live on forever in both our favorite movies and theme park attractions. Yesterday, the world lost Robert Sherman… a sad day for Disney fans world wide. I consider myself incredibly lucky to have been in the audience a year ago at D23’s WDW 40th celebration where Robert’s brother Richard took the stage to play many classics’s from the duo’s catalog live on stage. Their music has touched all our lives. Interestingly, yesterday was the anniversary of the opening of Journey Into the Imagination at EPCOT. And that attraction’s theme song, “One Little Spark”, was penned by the Sherman Brothers. In honor of the attractions anniversary and the passing of Robert Sherman, Austin took the time to gather a history of the attraction for us and also found some “lost” verses of the song. 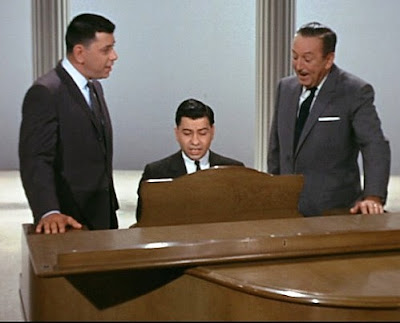 Tony Baxter led the design team for this wonderful attraction. Fresh-off of his first thrill attraction, Big Thunder Mountain Railroad, he quickly began exploring several new concepts. One such
concept would eventually become the most successful “unused” project in the history of Walt Disney Imagineering. Discovery Bay was described (by Tony himself) as “a once only place in time.” Situated
on the northern-most banks of the Rivers of America it was to be the kind of place in which Mark Twain, Jules Verne, and H.G. Wells would cross-paths, and probably even call home, Discovery Bay would contain several attractions themed to technological flights of fantasy of the 19th century. The list of attractions contained in the new land were, a flight simulator on the Hyperion airship from Island of the Top of the World, an underwater restaurant where one could dine in the Nautilus while Captain Nemo plays his pipe organ, an elaborate- and thrilling – Spark Gap Electric Loop Coaster, and a carousel theater audio-animatronics tour de force “Gallery of Illusions” in which an eccentric professor shows off his latest discoveries and inventions.
Unfortunately, the film Island on Top of the World, which had served as the inspiration for the land’s centerpiece attraction, the Hyperion flight simulator, “tanked” at the box office. This coupled with the
extravagant plans and budget projected for this new land, all but conspired to bring about the downfall of this radical new concept. But truly great ideas never die at Imagineering, and Discovery Bay would
resurface time and time again in new and unexpected ways.Much of Discovery Bay’s “success” is attributed to the many ways it was recycled over the next two decades. The failure of this new land eventually “sparked” into the Coral Reef Restaurant at Epcot, the entirely new concept for then EuroDisney’s Tomorrowland renamed Discoveryland, and certain elements certainly would apply to the design of Port Discovery for Tokyo DisneySea. 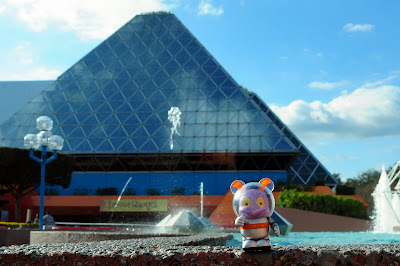 After working on a rejected approach for The Land Pavilion at EPCOT Center, Tony quickly turned his attentions to the Kodak pavilion next door. Kodak had only one request for their Future World exhibition, “They wanted something that would be very imaginative.” So we said: “How about doing a pavilion on imagination,” Tony recalls. Beginning to develop the ideas of such a vague notion as imagination was no easy task. “It was a fun time, and a real challenge, because we had to figure out what Imagination is. It took us six months to come up with a simple thing: “You gather, you store, and you re-combine.” Whether you are a writer, or a scientist, or an artist, or a teacher, or someone making a cake, it is the same thing: “gather, store, and re-combine.” The visual metaphor Tony used to convey this principle to the audience was an inspired invention known (unofficially) as a Dreamcatcher. “Essentially, the Dreamcatcher is a giant vacuum cleaner floating through space” said Steve Kirk, art director for Journey into Imagination. The Dreamcatcher flies through space collecting sparks and storing them in its idea bag, and some of those sparks are re-combined to create something new, in the case of our story; a literal figment of imagination.

The inspiration for Figment would also come from Tony Baxter watching Magnum P.I. “I was watching Magnum PI […] on TV. He was in the garden and the butler, Higgins, had all these plants and they were all uprooted. It was a mess. Magnum had been hiding a goat out there and the goat had eaten the plants. Higgins said, ‘Magnum! Magnum! Come out here! Look at this! Something has been eating all the plants in the garden.’ And Magnum says, ‘Oh, it’s just a figment of your imagination.’ And Higgins said, ‘Figments don’t eat grass!’ I thought, ‘There is this name, the word ‘figment’ that in English means a sprightly little
character. But no one has ever visualized it, no one had ever drawn what a figment is. So, here is a great word that already has a great meaning to people, but no one has ever seen what one looks like.’ So we had the name that was just waiting for us to design the shape for it.”” –Tony Baxter

Over 78 new special effects were created by Disney Imagineers for the Journey Into Imagination pavilion – more than all of those found in Walt Disney World on opening day in 1971.The attraction’s most unique feature, the turntable that allowed for a “stationary” scene on an Omnimover attraction, would be one of the most difficult parts of the attraction to develop and the first thing to go when the attraction
was replaced. The vehicles would lock into place on one of five identical scenes like cogs and then unlock to go onto the track containing the rest of the attraction. This “stationary” scene was a master stroke of genius that has not been repeated to this day. What is even more impressive is that this level of sophistication was
achieved by a relative novice. Tony Baxter had only one completed project, Big Thunder Mountain, before Imagination and this fact is a testament to the genius of his team, and the engineers involved with
this project. The rest of the Ride featured an exploration into the more creative endeavors of imagination: the [Visual] Arts, Literature, Performing Arts, Science and Technology, and finally Image Technology. 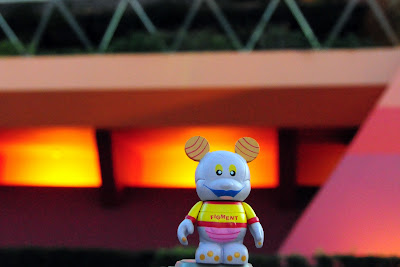 Over the years many rumors have surfaced in regards to Imagination’s turntable. One such rumor is that the reason for its removal was due to its in-operation on a daily basis. The original Journey into
Imagination ran successfully for a period of 15 years (from 1983-1998). Another rumor speculates that the turntable was slowly screwing itself into the ground. This would require a large amount of
industrial mining equipment to be installed on the bottom of the turntable. In addition, the grinding would have cause major damage to the concrete foundations that could not be corrected in the amount of
time taken for the conversion between the original and second versions of the ride.Whether these are true or not, I don’t know but it’s always fun to speculate.

As part of the original plans for Discovery Bay the “Gallery of
Illusions” was to be hosted by inventor/discoverer Professor Marvel, a
“Santa Claus-type, who is wise and older and knows all great things-a
great thinker” as Tony described. In one pivotal scene, the professor
demonstrates his domestication of dragons. Toward the end, he’s seen
holding a newborn green baby dragon. This image would later serve as
the inspiration for the Professor’s sidekick. Dreamfinder, himself
however, was modeled after Imagineer Joe Rhode who later oversaw the development, construction, and operation of Disney’s Animal Kingdom. Dreamfinder’s voice was supplied by comic actor Chuck McCann and Ron Schneider. The voice of Figment was a little harder to cast. Imagineers tried men, women, boys, and girls even having adults inhale helium, but no one had the right voice. Until they found veteran performer Billy Barty whose voice was perfect for the 3 foot tall purple dragon.

The pavilion itself started its design phase a full year later than its Future World Neighbors. However, it was still slated to be one of the opening day pavilions of the park. While the Pavilion opened, with
the rest of the park on October 1st, 1982, (technically, only the Image Works was open and five days later Magic Journeys) the centerpiece attraction was “ready to go, everything was running and
they made the call that the show was not perfected enough to guarantee the reliability they wanted,” Baxter said. However, considering that EPCOT Center’s opening day was presumably worse than Disneyland’s “Black Sunday,” Imagination was probably just as ready on opening day as the rest of the park. Considering the unreliability of all the attractions during those first few months upper management was probably wary to add more fuel to the fire that was opening day. With the extra time, Journey into Imagination opened on March 5th 1983. Although not without its’ own set of unique problems, most operational issues stemmed from the loading and unloading belts. Loading was performed on a stylistically beautiful but problematic curved belt. Unloading was difficult at best. Due to irregular intervals, the vehicles and the belt could not synchronize properly. Eventually, Unload was performed without a moving belt. From the first day it opened, the Journey into Imagination was one of the most popular attractions in the park. Excluding the morning rush at Spaceship Earth, Imagination had the longest wait time of any attraction in the park. Forty-Five minute wait times were common, and the extended queue was always kept up. Ironically, the popularity of the pavilion was entirely unexpected or planned for. As David Koenig put it… “Disney executives had always acted embarrassed about having an EPCOT pavilion devoted to a lightweight, non-scientific topic like imagination and starring a cartoon dragon. So, in publicity for Future World, Disney had always touted pavilions on ‘energy, transportation, communication and other topics for tomorrow.’ Imagination, the park’s surprise sensation, was always ‘other topics’.” 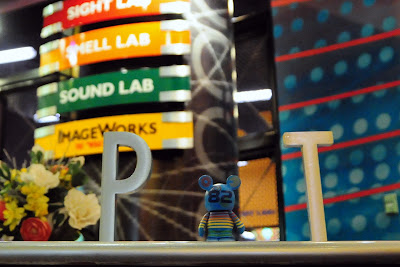 Well there’s the basic history of Journey into Imagination. Here are a few fun facts starting off with lost lyrics, and ending with specifications for the original ride.

Like most songs, “One Little Spark” went through several revisions and had several verses written before the final version was settled on.
Usually those scrapped verses never make it to the public, but one
verse of “One Little Spark” has. In “A Souvenir Disney Songbook –
Favorite Songs from Disneyland & Walt Disney World” ((c) 1994 Hal
Leonard Publishing Corp.), this “lost” verse can be enjoyed: 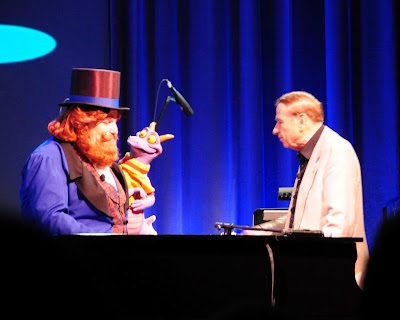 And here’s another “lost” verse that was originally going to be just
between when Dreamfinder says “And every sparkling idea can lead to
even more.” and just

before the “So many times, We’re stumbling in the dark” line:

One bright idea
One right connection
Can give our lives
A new direction
So many times we’re stumbling in the dark
And then, Eureka! – that little spark!

VINYLMATION THAT FEATURE JOURNEY INTO THE IMAGINATION: 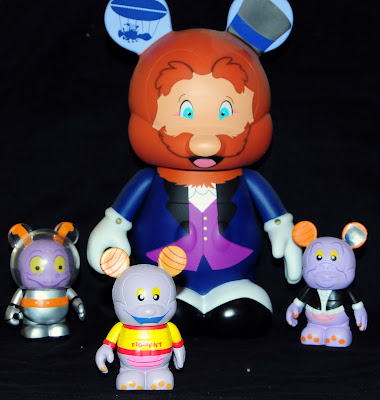 Park 1 Figment, Park 5 Dreamfinder/Figment 9/3 combo and Park 7 Figment. There is of course also a Park Starz Figment already released and a Nerds Rock! version coming out soon. I would also be remiss to mention custom artist Justin Marshall who has an obsession with Journey into Imagination customs. 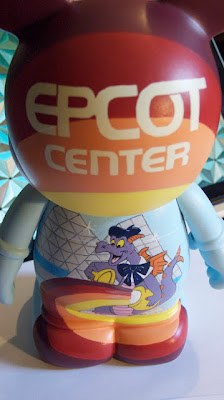 Its a great loss.. may you rest in peace Robert Sherman!

Rest in Peace Robert Sherman, you will be missed.

Thank you for the amazing songs.