Sorcerer of the Magic Kingdom the Home Game Rules

Sorcerer of the Magic Kingdom the Home Game Rules
Version 1.0
By Ryan Thompson

A note from DV: Ryan drafted up some rules for a home (or where ever you would like to play) game. Check out these game play rules. Test it out. And send your feedback to Ryan: [email protected] Also, you can find our pictorial and downloadable checklists here.

To play Sorcerer of the Magic Kingdom the Home Game, each player should have their OWN deck of 20 to 50 cards. Each deck cannot contain more than 3 of any single Star, Moon or Planet cards as found in the bottom left hand corner of each card or no more than 1 of any single Lightning Bolt card.

To start the game each player shuffles the deck of cards they have and then asks if the other player would like to cut the card. Each player starts with 30 MAGIC POINTS. You can use whatever you like to indicate these points, coins, pebbles, or just a piece of paper with twenty dots on it.

To start each player deals themselves three cards. This forms their HAND. After the HAND is formed, each player turns over two cards into the playing area in front of them, these two cards are immediately in play. (See figure 1) 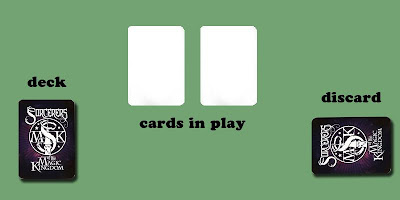 PICKUP:
On the first player’s turn, they pick up any cards required to get back to a total of 3 in their hand.

ATTACK:
A player now has a chance to attack their opponent. They indicate which, if any, of the cards already in play they wish to attack with and TURN these cards to show they are in use.

DEFENSE:
The opposite player now has a chance to DEFEND with any cards they already have in play. They indicate this by placing the DEFENDING card on top of the ATTACKING card.

ATTACK BOOST:
The ATTACKING player now has their own chance to BOOST, only ONE of their ATTACKING cards. (SPECIAL cards will allow more than one BOOST. See Special Rules.)

The DEFENDING player does the same for their DEFENDING card, adding the number of SHIELD points the card has and any BOOST cards player on top of it.

If the ATTACKING card has a higher number of points, the DEFENDING card is placed in the DISCARD pile (along with any BOOST cards) and the remainder of ATTACK – DEFENSE is figured. This is the DAMAGE to the opponent, and this number is removed from the MAGIC POINT TOTAL of the defending opponent.

If the DEFENDING card has a higher number of points, the ATTACKING card is placed in its owner’s discard pile and no damage is done to either player. 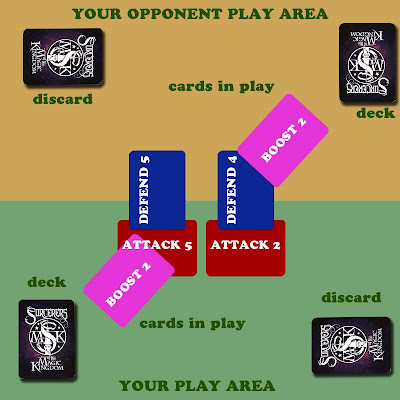 The ATTACKER boosted the left card with a 2, giving the total ATTACK POWER of 7 for the left side, which is being blocked by a total of 5 DEFENSE points. The DEFENDING card here would be discarded and the OPPONENT would take two points.

On the right side the DEFENDER boosted the SHIELD with a 2 BOOST giving a total of 6 DEFENSE/SHIELD, which means the attacking card would be discarded and no points would go to the opponent.

AT THE END OF THE DAMAGE ROUND ALL CARDS THAT WERE USED AS BOOSTS ARE PLACED IN THE DISCARD PILE.

The play continues with the next player following the same sequence as above, until ONE of the players is reduced to 0 MAGIC POINTS.

NOTE: If any anytime you run out of cards in your main DECK, shuffle the cards in your discard pile, give your opponent a chance to cut, and make this your new DECK.

NOTE: These special properties will sometime seem to conflict with the above rules. These are designed to ENHANCE the basic rules above, and are optional. These rules SUPERCEDE any rules they conflict with as outlined above.

Each type of card has special properties to further enhance the game. Use these to create a more interesting and challenging game! These properties are all controlled by the type of spell being cast, from a choice of Charming, Wishful, Energy, Quick, Flying, Strong or Gross.

CHARMING:
Charming spells have no limit when used as BOOSTS, allowing a player to play MORE than one BOOST card either attacking or defending. All BOOSTS still have to be declared at the same time and a player can play 1 of any other boost, and up to two more CHARMING boosts, for a Maximum of 3 boosts.

WISHFUL:
Wishful spells that are IN PLAY can be sacrificed to give the player who owns the card additional MAGIC POINTS equal to the SHIELD number of the WISHFUL spell. This spell cannot have been involved in an attack or defense during the current turn. These cards are not placed in the discard pile, but instead removed from play for the rest of the current game. Wishful spells cannot be sacrificed from your hand, but only while in play. (They still can be replaced by another card in your hand if it’s before your attack round.) FOR EXAMPLE: If you sacrifice a “Mickey’s Magic Beans” you raise your “Magic Point” counter two points.

ENERGY/FLYING:
Energy or Flying spells cannot be DEFENDED by any other type of card other than ENERGY or FLYING. Once defended, ALL BOOSTS count.

QUICK:
Quick spells can be put into play even during your opponents turn and are able to be used to SHIELD/DEFEND during that turn. The rule of only two cards in play at any time still is in effect though.

STRONG:
Strong spells gain a bonus of PLUS 2 when defending any other spell EXCEPT STRONG or GROSS spells.

GROSS:
Gross spells get a bonus of PLUS 2 when ATTACKING and it is defended by any other spell other than GROSS or STRONG spells.
NOTE: This means undefended cards do NORMAL damage to the opponent, the bonus ONLY kicks in when being DEFENDED.

Previous
Our First Pictures Inside Storybook Circus!
Next
Urban 9 Leaked