Light Up Mickey Review by Sophie

Sophie, who brings us many of the wonderful graphics across our site, has written a review of the new 25th Anniversary Light Up Sorcerer Mickey. 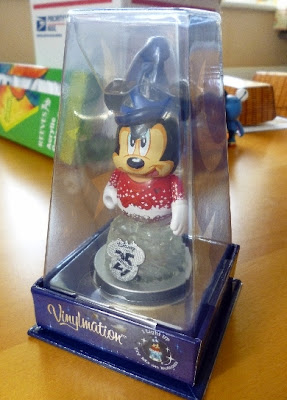 In the last couple of days some Disney stores in the UK accidentally sold the 25th Anniversary Sorcerer Mickey early (RP 12.00). I was lucky enough to pick up a few before they were removed from the shelves until the official release date of May 28th. 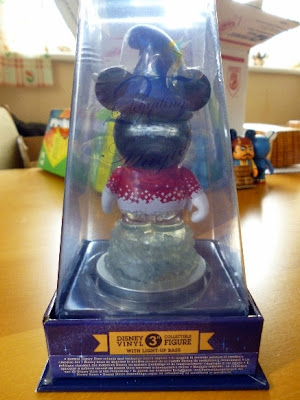 He comes in an unusual shaped package (similar to combo toppers) however I’m assuming this was to enable Mickey to be presented with the Sorcerer’s hat on. The base is the same as the special display window boxes, however on the bottom there is a hole for which you can turn on and try the light up base, so it’s not great for display purposes. However it does look nice as it’s decorated with silver shiny sparkles along with the Vinylmation and Disney Store 25th logo. The plastic part of the packaging does break easily as I was given two which had been cracked, so be careful with that. The back sides and top have a blue film with sparkles and incorporating the sorcerers hat design with clear areas shaped like moons and stars cover the film. On the top is the Disney store logo. And for a nice little touch, on the back it says Celebrating 25 Years of Magic with Tinkerbell waving her wand. Although the decoration of box is nice, it does means it’s hard to see the figure and identify any areas of poor quality. 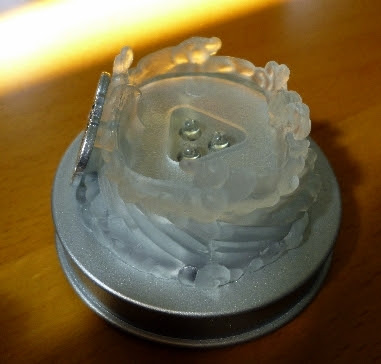 The main reason for why I bought mine was for the light up base. It’s a great little extra way to display your clear and translucent Vinylmations! Remember only Vinylmations with clear feet can light, with the better effects when both the feet and body are clear and even better when the whole vinylmation is on a clear figure. It works great with Ariel’s Undersea Adventure, 100 years of Magic hat, Alien, Obi Wan Variant, Furry Friends Cheshire Cat and the clear Pink elephants. Both old mold and new mold fit snugly into the base. It is very sturdy, you can even turn them upside down and they won’t fall out. Although none of my figure’s feet have been scratched, I would take care when removing and inserting them into the base. Overall the design is filled with nice translucent cloud shapes that swirl around your vinylmation’s feet and also means it partially lights up when switched on. 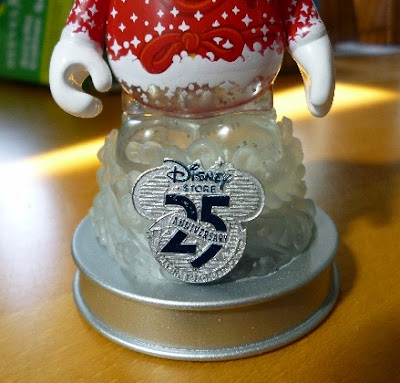 A detailed Disney store 25th Anniversary logo proudly stands out on the front, which is a bit of a shame as it won’t make sense when displaying other non 25th Anniversary Vinylmations. The very bottom of the base is a metallic silver which does help in a small way to intensify the light. Turn the base over and you’ll find the compartment for the batteries, a switch and a button. With the switch you can change from “Try” mode, in which the base can only be lit up by pressing the button continuously, or the “On” mode so that when you press the button the light will stay on until you press the button again. The light itself comes from three white LED bulbs, arranged in a triangle shape, be warned they are very bright so don’t directly look at them without a figure being in the base. The brightness does mean it can light up a small portion of the area around it. Not only does the base lite up, but it adds an extra 2cm (approx. 1 inch) to a figure’s height. 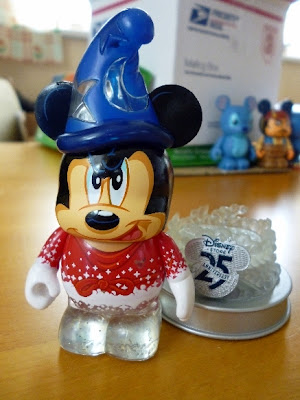 Now to the bit that I’m sure most people are interested in. The figure itself! The design has been printed onto a clear figure with glitter running throughout it. It looks super nice and makes it look a bit more magical. Hopefully we will see future figures with different colored glitters. Around the hands and waist is essentially a white line with stars radiating from it, thus making a nice transition from the clear feet to the rest of design. Plus it adds to the light-up and magical quality. Above this you will find Mickey’s red robes. The folds in the clothes and bow at the front is really great, as highlights have been added. Also on the front you will find part of the robe in the top right missing in the shape of Mickey ears, letting light shine through the pattern. 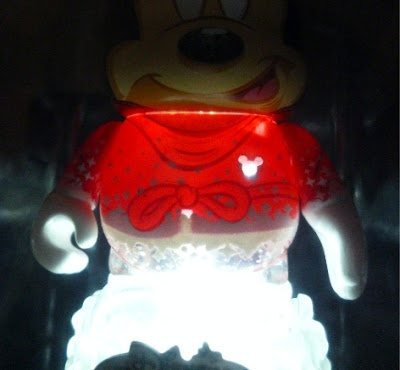 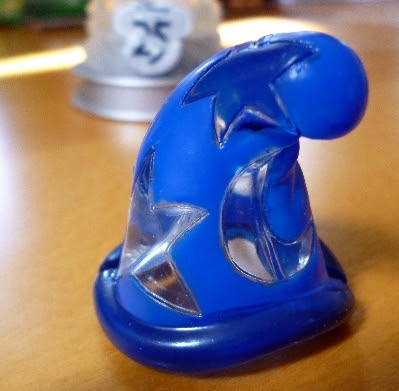 Next up is the removable hat. It’s quite an awesome accessory as unlike the other standard Sorcerer Hats this has been shaped. The rim shape moves up and down, the top slopes over to one side, even folds have been included. The moons and stars are clear meaning some of the light from the base comes out from them. When he’s lit up the feet shine very brightly, then the body, however the head doesn’t, so if you were in quite dark conditions you cannot see his face at all. Also to note, with the finish that’s been added to this figure, plus its snug fit, the hat can scratch the ears. Speaking of the finish, it’s glossy and sleek, similar to that of the Tunes series 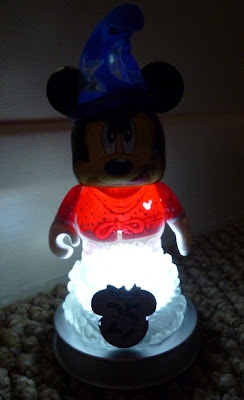 Now some of you might know of quality issues, and yes there are some, all of which are to do with the paint. application. Firstly the white fluffy cloud that surrounds the waists and arms at parts lacks definition. On one figure the precise outline of the stars wasn’t there at all and appeared blurred. The mickey face on the robes also varies, some the outline is not cleanly cut/stamped thus leaving a rough outline. On the face some parts do not correctly line up with the rest of the face, e.g. overlapping. Then of course there’s the occasional small blob of paint. However, these faults are hard to find, but when lit up everything shows up. You can see where there have been repaints as they appear darker. The most annoying part when lit up are the sparkles around the waist, part of it is applied on the red robes and the other directly onto the mold. Thus half seem light and the other half darker. 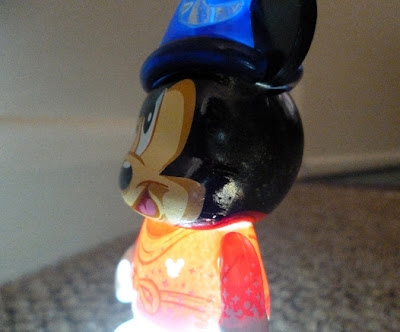 When lit up all figures have a line of light coming from the neck, some more than others as the paint doesn’t fully cover the very top of the body and the very bottom of the head. Perhaps this was a design decision so that head can be lit up, but to me it looks unsightly. Similarly a line of light has often escaped from around the brim of the hat. Speaking of the hat, the blue paint doesn’t reach the outline of the stars and moon and due to the fold shape, lighter and darker areas can be seen due to more paint being added to some parts more than others. With one or two figures light also can be seen through the applied design, often with the black parts of mickey’s head, such as the nose and back of head. 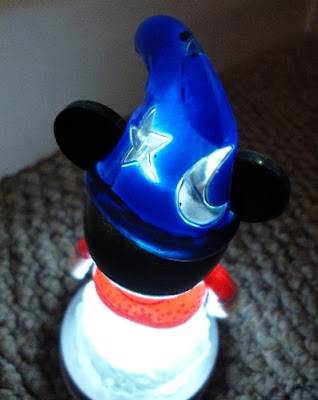 In conclusion the figure by itself not lit up is great and here are plenty of other figures that look amazing when lit up, so use them instead. – Sophie