The Disney Character Star Wars series was my most anticipated group of Vinylmation to date. It is a mash-up of two of my favorite properties. As you know from listening to the podcast, I have been collecting the action figures as long as they have been released. That being said, in this review, I may be both little biased to like these, and at the same time very tough with my judgement because I so wanted them to be perfect. Are they perfect? You can hear my review (and interview with the artist Maria Clapsis) on the latest podcast, but I thought I’d also break it down character by character here on the website as well. 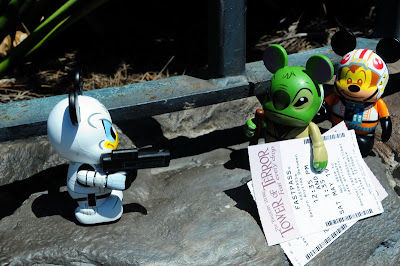 After getting these figures in hand at the opening of Star Wars Weekends at DHS, they really impressed. Let’s start with the concept. At it’s core, this is not a new design, but a build upon an existing concept. For these to work, it all starts with the face. Over the course of Vinylmation’s history, artists have been getting better and better and truly expressing the character’s emotion on the Mickey mold head. Each of these are shining examples of how to place the traditional Disney characters onto this 3D form. Next you must build the Star Wars character outfit around the body. Although similar to Star Wars Series 1, Maria seemed to improve upon what Mike Sullivan accomplished by adding more and more detail. To top it all off, each character has an accessory specific to them. All of which add to the overall concept. Each figure comes in an open window box and retails for $15. 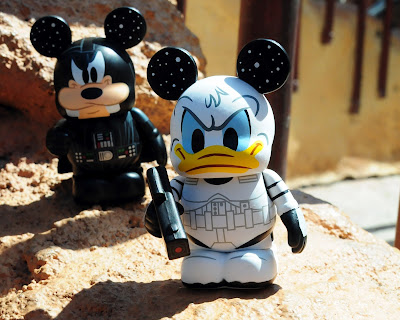 It’s hard to improve upon what Mike Sullivan did for the Stormtrooper, but Maria took an approach that I wouldn’t have even knew I wanted until I saw it. Mike painted heavy black outlines for each feature on the suit. Maria used light grey. This really cleans up the figure and draws your attention to the face. And if you look at an actual Stormtropper, there is no black on the body… only the arms, where Maria used bold black lines. Maria did not have to design the helmet, but I would argue the duck face is a bit harder to accomplish. Then we have the gun. There must have been a few different ways to go with this, and in the end Maria chose a blocky feel to it as opposed to an action figure type gun. This design just plain looks right in this cartoony situation. I have heard complaints about Donald holding the gun. I think it fits in nice and snug if you slide it down the hand like the light saber. And if you tilt it and don’t try to force the fingers into the trigger, you can turn it to point forward and it looks natural. 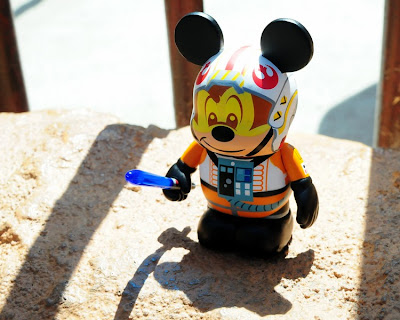 Maria’s favorite design in the group is also the most detailed. Not much to say about this one, but Wow! M.C. spoke it best on the podcast… there is no reason to put that much detail into the helmet… but she did! And that is what makes this one special. Along with the “see through” visor painted on over the eyes. Simple perfection. The light saber has a modified design for the new mold hands. We get rid of the hook portion that was necessary to keep the light saber in the other hands. And if it matters, the new light saber is a tiny bit longer than the previous ones. 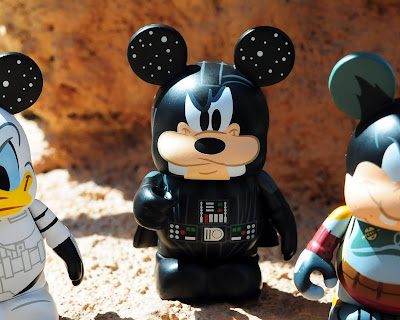 The artists all around are really getting Goofy’s face down. The interesting thing about Goofy is that Maria went with a more straightforward approach than Mike Sullivan. She has straight lines on his uniform as opposed to the curved comical nature of Mike’s. Also, this figure continues Maria’s trend of using lighter outlines. The standout part of this figure is the add-on cape. It is not removable, but glued at the neck. It seems like a sturdy piece and the wrinkles are drawn onto it. Plus his hand really looks like he’s giving the death grip. 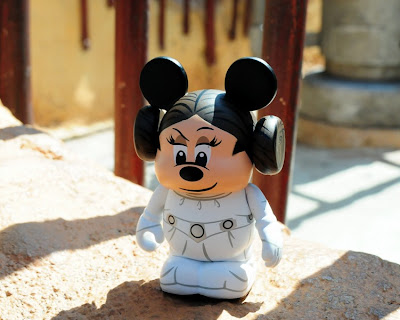 It would be easy to call this one of the more simplistic pieces, but to capture Minnie’s expression as Maria did, is a work of art. Annemarie said it best to me the other day… Minnie looks sassy. She really has this tough princess vibe to her. The clothing scheme is as simple as in the movie, but the hood is so expertly drawn on the back… you would think you could flip it up. But it is those hair buns that your eyes are drawn to. Painting those flat on the side of the head would have left us with a less than stand out piece. Making them accessory pieces had to be done because of what we expect from Vinylmation these days. That being said, it makes it no less spectacular to see them. 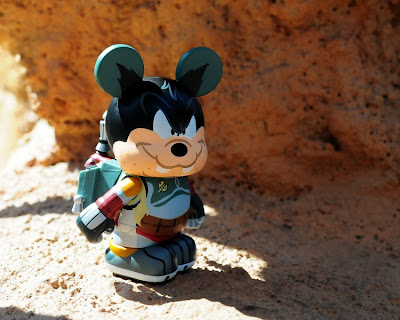 I keep going back to it starting with the face… and Pete, drawn by whoever, looks so good on a Vinylmation. The uniform is well designed for this crossover character. I wish I asked Maria this, but it looks like she went out of her way to make sure we see Pete as this large, overweight character. He appears to have a droopy belt line. There are pluses and minus to both Maria’s and Mike’s designs. The Star Wars 1 Boba has a more accurate looking front. Such as the white opposed to color chest logo and the belt area. While Maria has the more accurate back. The back is where the jet pack is and Maria stepped it up a notch with more well defined features and a more intricate color scheme. 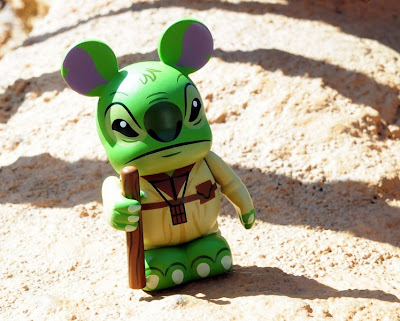 I was a bit disappointed with Yoda from Star Wars Series 1. I didn’t feel it captured his essence. I also do not truly love a single Stitch I’ve seen on a Vinylmation (April Skyy has some brilliant ones, I know). So this figure had the odds stacked against it. I think as a Stich or Yoda, it would still fall short, but as a mash-up, it is spectacular. You get that complete alien feel. I like the over sized nose, slanted eyes and the wrinkles. There is an overall softness to the outfit on Yoda Stitch. Maria puts in all the same details as Mike, just in a way that fits the cartoon character better. She even draws the hood on the back. The color palate is so well chosen. I like the bright green for this crossover and also the warmer robe color.