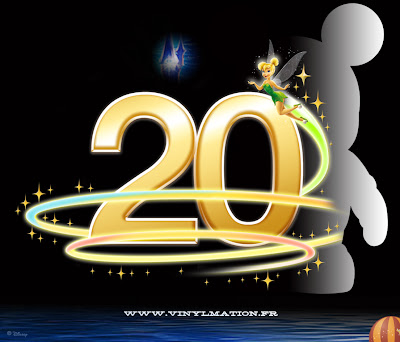 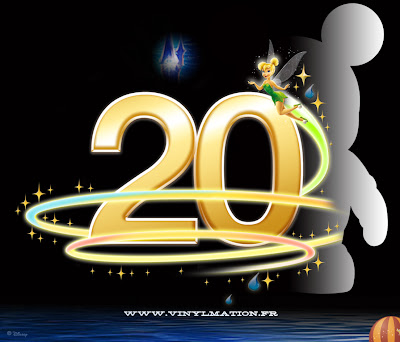 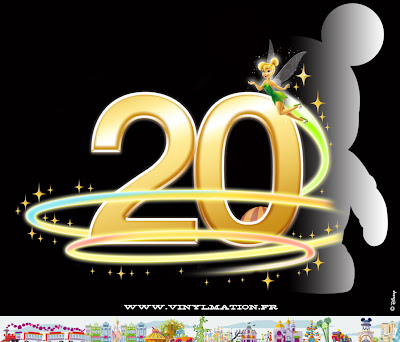 As of 05/13/12
Update: 05/13/12 This graphic went in a completely different direction then we ever thought. Instead of slow revealing elements layered underneath, they are adding and subtracting things. This update gets rid of the water drops that were added last update, moves the balloon from lower right corner to inside the “0”, takes away the peek of the castle above the 20 and replaces the water at the bottom with the colorful panoramic featuring various DLP attractions.
The graphic still links to the US Vinylmation site, but they added a release date: May 17, 18, 19 and 20 will see Cheshire Cat 2-pack, 9″ Crying Alice and “other surprises.”

Update: 04/14/12 These figures will not be exclusive to DLP. At least the four 3″ figures will be released at WDW and DLR on April 20th.


Update: 04/12/12 New images debuts as shown above. but does not reveal anything new. In fact, the 20 logo with Tink and stars seems to be a new graphic rather than an add on or color in as Tink is different and the stars are in varying places. Also the sorcerer hand is missing. No new hints to vinyls revealed and the graphic still links back to the US Disney Vinylmation blog site. The info below the graphic has been updated however. Nothing revolutionary, but it does announce the Disneyland Paris 20th celebration on April 12th (today). There are events at Pueblo Trading Post at 10:30 with the team DLP Collectibles (Pin, Vinylmation, and many other things)

Update: 02/27/12 @VM_Paris pointed us to a forum on the French DLP fan site Disney Central Plaza who has an interview with Marianne Sharpe, Director of Merchandise at Disneyland Paris, who revealed 4 of the DLP 20th anniversary Vinylmation figures. 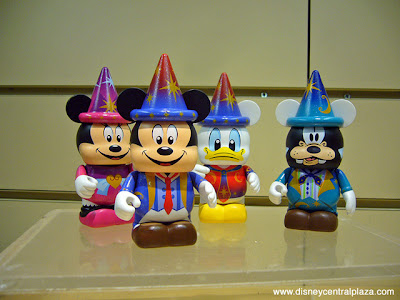 A very colorful set of figures. No details on how they will be released, but the costumes sure fit in with the screen shot we brought to you a few weeks ago (see it below).


Update: 02/21/12 The French Disney fan site Disney Showcase Key reports that their source, a Disneyland Paris Cast Member, says Park 10 will be completely DLP themed. Just like I enjoyed Parks 7 and 8 being WDW themed, I would welcome a DLP themed Park 10. Your thoughts? They also updated Vinylmation.fr to include locations to purchase Vinylmation. 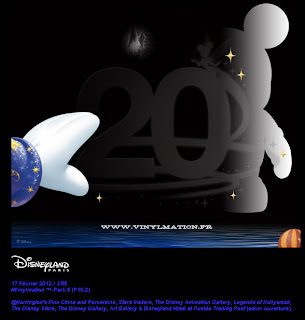 Update: 01/22/12 The newly updated splash page lights up another star or two, ads some water to the bottom of the screen and an image of the castle turrets begin to appear above the 2.


Update: 01/13/12 According to @VM_Paris, a new video released by DLP about the festivities surrounding the upcoming DLP 20th celebration points to possible Vinylmation designs. 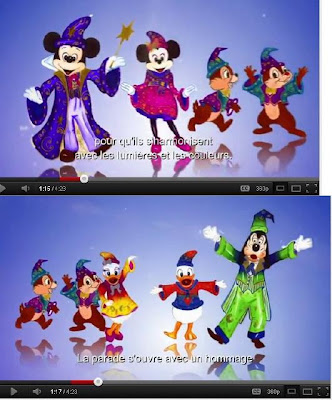 There are rumored to be figures in DLP costumes.


Update: 12/11/11 Another gives us a couple more lit stars and a balloon in the bottom right corner. The balloon appears to be PanoraMagique, the hot air balloon guests can ride at the Disney Village, DLP’s version of Downtown Disney. 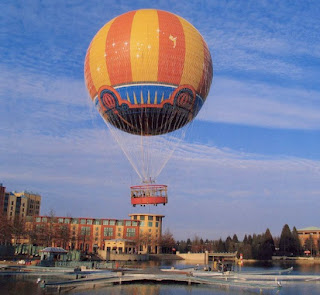 Opening in 2005, it’s a 6 minute flight above Lake Disney and the DLP resort. It is the largest tethered balloon in the world. In 2007, it was given a DLP 15th anniversary overlay… 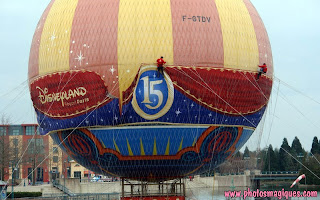 …witch makes us wonder if a 20th version is in the works? This balloon would surely also make a great DLP exclusive Vinylmation figure.


Update: 12/3/11 Looks like they updated the image. I wonder how many of these they have planned?

Update: 12/1/11 A newly released ad (thanks to @VM_Paris) announces the celebration will start on April 1st, 2012. Not sure how this effects the vinylmation, but it’s a good reference date.

Our friends over at disneyshowcasekey.blogspot.com brought to our attention some info on several 20th Anniversary vinylmation coming to Paris. Along with this will be what seems to be a Vinylmation website just for France at www.vinylmation.fr. Just that logo is up at the moment, but check back and see what appears soon!

Disney Showcase Key also has some rumors of the exclusive Vinylmation we may see. According to a Google translation, here’s what it appears to point to.

A set of twelve 3″ figures depicting. Disneyland Paris Attractions.
A set of 4 or 5 Disney Characters in Costume presumably from DLP.
and A 9″ 20 Anniversary piece with three 3″ fairies from Sleeping Beauty.

What do you think? Any ideas of figures?