tarting June 15, Disney California Adventurepark guests will have the chance to light up the night when Glow with the Show Ears become available for purchase at select locations throughout the park.

For more than 55 years, the classic, black Mickey Mouse ear hat has been a Disney Parks guest favorite. In 2005, those ears got a golden touch to celebrate the 50th anniversary of Disneyland park, and there have been more than 200 different ear hats including limited-edition and novelty ear hats. Now, using the latest interactive technology, our newest ear hats will quite literally let you “Glow with the Show.” Watch as the iridescent ears change to complement and harmonize with what’s happening around you, allowing you to become a part of the magic of our nighttime spectaculars, such as “World of Color” and Mad T Party. But that’s not all – there are lots of surprises in store when you visit Disney California Adventure park with Glow with the Show Ears, so I’ll let you discover them for yourself!

Here’s a peek at what the new Glow with the Show Ears will look like: 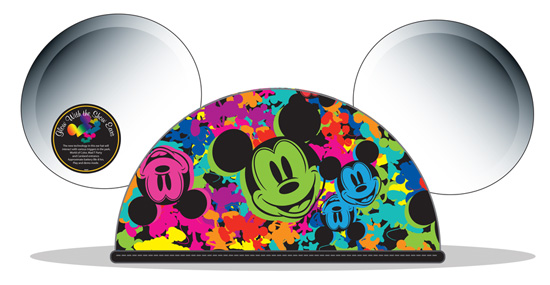 “Glow with the Show now lets our guests become part of the color of our magical ‘World of Color’ at the Paradise Bay lagoon,” describes Steve Davison, Creative Entertainment Vice President of Parades & Spectaculars. “Throughout the show, the Glow with the Show Ears become a set of pixels that dance and play along with each sequence in ‘World of Color’ in a bright and dynamic way. For example, during the show, guests become part of the ocean with the Little Mermaid, a shining galaxy of stars for WALL-E and Eve, an extension of the Genie’s magic in ‘Friend Like Me,’ among other interactive explosions of color throughout the entire show. It truly brings the show’s environment out of the lagoon and into the audience in an amazing and dazzling new way!”

Are you planning to “Glow with the Show” on your next visit to Disney California Adventure park?

This is an interesting concept that has actually been tried before with The Magical Moments promotion in Florida. Guests could buy pins that would light up when you walked past certain buildings in the parks, watched parades, or even went in to certain attractions.For example, on Tower of Terror in the hallway scene, when the walls turned into a star field, your pin would light up as well.

This sounds like what Coldplay did at the Hollywood Bowl this past May. If it's anything like it- this WOC viewing will be exciting!