Update 7/16/12 D-Street had this figure on display and we finally get to see the back and sides of the figure: 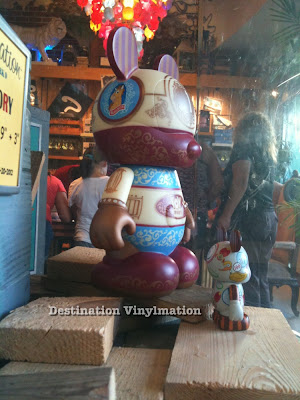 One side has Bullseye. These logos are find on the side of the ride vehicles. 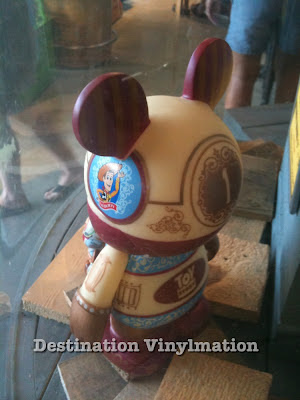 The back mimics the front, as tiny design disappointment. 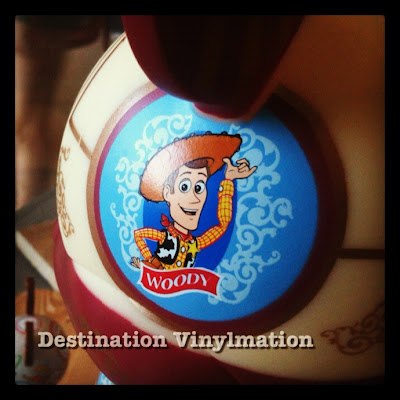 The other side has the color Woody logo. Do the side logos add enough to this design to make it worth the money? They look perfect in person. Production wise they are applied well and full of color. Seeing these logos, I now see why this is a 9″ figure when it seemed like a 3″ worthy design. However, in my opinion, the 9″ canvas needs to be filled with these logos from all the characters to make it worth it. The 3″ has a ton of little details and is the best part about this set.
–
Update: This article has been modified from it’s original version with updated attraction history and new info based on the product shots of the 9″/3″ Toy Story Midway Mania figure and the fact that it is a combo set.
Toy Story Midway Mania is an interactive attraction that takes place in the Disney Pixar Toy Story Universe. The attraction opened it’s first location at Disney’s Hollywood Studios on May 31, 2008. This was shortly followed by the same attraction opening on June 17, 2008 on the Paradise Pier at Disney’s California Adventure Park. And today, July 9, 2012, a version is having it’s grand opening at Tokyo DisneySea. The attraction starts you off with a walk through a room full of larger-than-life toys… making you feel “toy sized” as you walk around the queue line. You then encounter an animatronic Mr Potato Head that interacts with the guests. 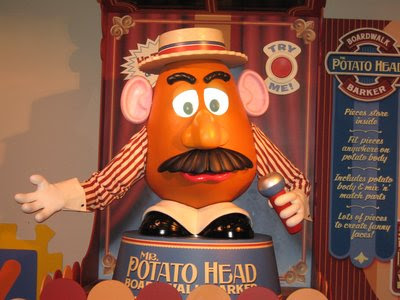 The queue brings you into Andy’s room, which is the ride vehicle loading area. Then, with your 3D glasses on, you are sent through rooms full of interactive amusement park type games filled with the Toy Story characters. 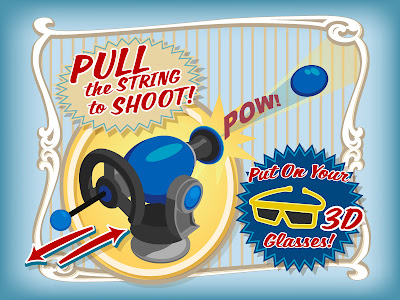 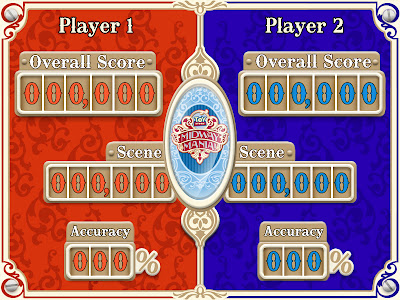 On July 20, 2012 a 9″/3″ combo designed by Lin Shih will be released at D-Street. We first saw the concept art for this one at least a year and a half ago and it was presented to us as a “future park series.” Well, a few Park series had passed, Park 10 was unveiled, and still no Toy Story Midway Mania figure. Then, the LEs for Park 9 hit the release calendar and not only was the Toy Story figure on the list, but it was coupled with a 3″! I’ll admit, I was a little disappointed to see this design be blown up onto a 9″ canvas. I think the patterns and colors would have looked perfect on the more compact 3″ canvas. That’s not to say I do not think this is a really beautiful figure. 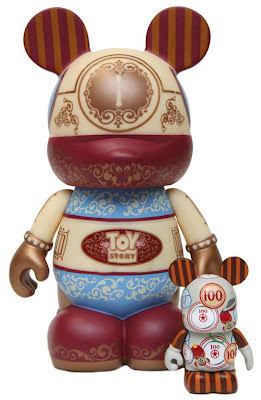 The positives about this piece is the representation of the true colors and patterns of the attraction. The stripes in the ears of both figures match up with the strips you will find on the signs and walls around the attraction.

A look at the poster for the attraction, also shows where many of the patters, colors and overall feel of the design came from. 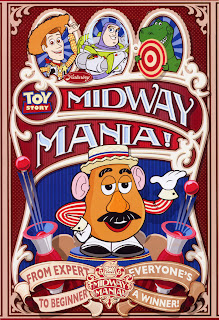 The arms on the Vinylmation seem to coincide nicely with the “vintage” amusement park ride style of the attraction. Also the blue pattern used on the body, matches the pattern found on the side of the ride vehicles. 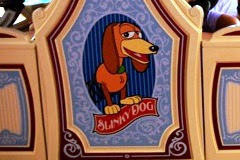 The 3″ figure in this combo is a wonderful little treat and would have served as a fantastic piece of a 12 figure park set. I almost wish I didn’t have to buy the whole combo to get it. 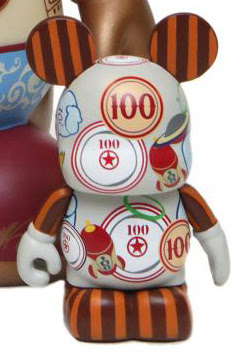 Lin Shih took the various targets found throughout the game play and placed them in a collage around the canvas. We see the Plates, Sheep, Rockets, Planets and 100 point targets. Here is a promo shot from Disney that shows some of the targets. 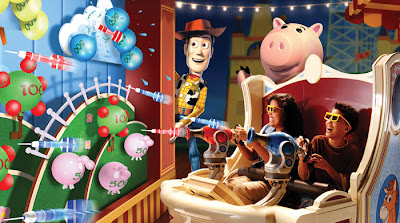