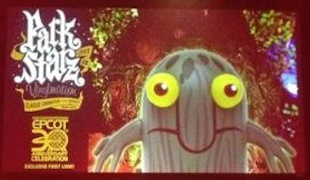 According to Vinylmation World, the second figure of Park Starz 2 was revealed at a special D23 event for the 30th anniversary of EPCOT. It appears to be a Tree Troll from the Maelstrom ride. It also resembles one the unpainted molds we saw in one of the videos from Disney early this year. Now remember that Park Starz 2 will not be available until 2013!