The Disney Store decided to attempt a little reboot of the Robots series. They announced back at Mickey’s Circus how Robots 3 will be Disney Characters as robots. Now, we have a release date for the series of November 19 at Disney Stores. On Friday, the Disney Vinylmation Blog reveled 4 never before seen designs.

The artist(s) seemed to have put a lot of though in decided what defining characteristically or themes from each character to put into the designs. Minnie has some pink tones throughout and keeps her bow. She has a Mickey head at her core and has yellow on her feet representing the heels she never leaves behind. It wouldn’t be Winnie the Pooh without a tummy full of honey! I absolutely love that feature. But the coolest (and not just because he’s one of my favorite characters) design feature in any of these is the claw drawn onto the body of the Little Green Man from Toy Story. He also gets an antenna and the Pizza Planet logo. Grumpy, a favorite of the DS Artists, still has his trademark beard drawn on, but it is almost sucked into a hole on his belly and has wires wrapped around and through it. I liked the concept when this was announced, but was skeptical. I really hope they give me a Donald Duck and I’ll call this set a win! Here is a look at the Tigger and White Rabbit we saw previewed at Mickey’s Circus. 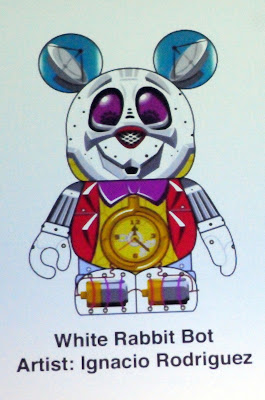 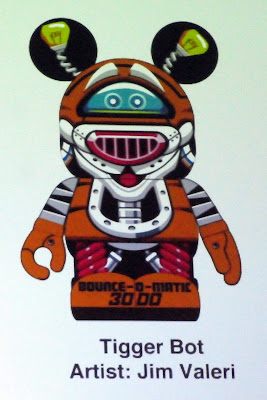 I love this series. My favorite part is how they incorporate parts of the character’s personality into the robot design, like how Tigger has springs for legs, Pooh has a stomach full of honey, or the alien having a claw game. Plus the artwork is absolutely phenomenal. I hardly ever buy the entire series, but this one is a must.

Sheesh this is going to be an expensive month. Got my Park 11 tray on its way and now this series. Plus of course the Pixar series as well. Wow!!! I look forward to it!!

Oh no…another Jason posts here! I’m the one that complains about Park 11 being all Disneyland and about all the clears in the HM series. I’ll tweak my name a little in honor if this. Anyway, these are creative and I could see kids liking these.

Well nice to meet you “other” Jason. Lol

They are easily the best robots series, but sadly they’ve gone nuts with 5 blind box series in as many weeks. Don’t have the space nor the cash for everything…

Haha I will be j3, I think Disney should just name this robots not number 3. When the very first blind box opens then all before it will sponaiously combust and forever be forgotten. This series is so good that I want to see all Disney characters as robots.

Vote Up0Vote Down
Another Variant for Donald Duck
Extreme Wrestlers Get Extremer!