When guests showed up in Orlando for the release of the Pixar 1 LE combo set featuring the Little Green Men from Toy Story, we were treated to a brand new Vinylmation themed window display at D-Street. 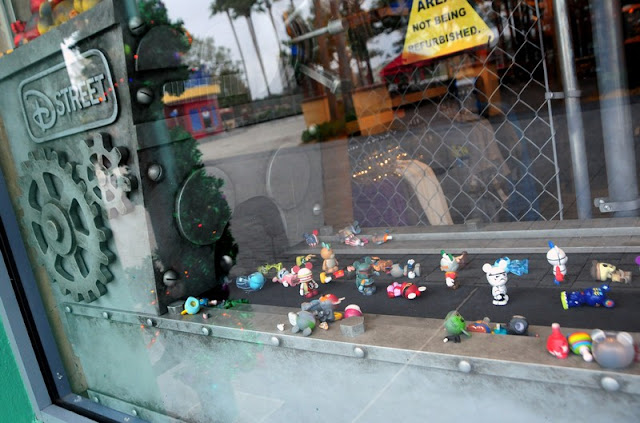 Behind the left hand window was a moving conveyor belt full of Vinylmation! The figures ranged from sets throughout the years and included commons, variants and chasers. Some figures were in good condition, but many had scuffs and spray paint on them as if they were factory rejects. The figures were stuck to the belt and continued to go around and around in a rotation. 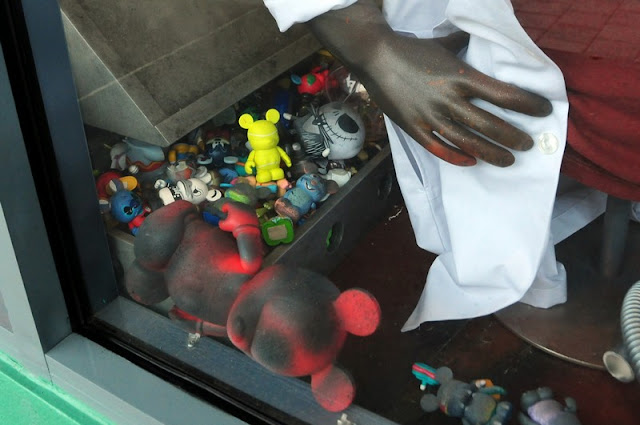 At the end of the conveyor, there was a bin stacked high with vinyls as if they were just dumped off the belt. You can see damaged figures piled up and spread around the windows. Looking at this display, I can’t help to think it’s a commentary on the state of the Vinylmation hobby from Disney. This is completely my observation and is NOT from any Disney Cast Member. But it seem almost a message to Vinylmation collectors saying, ‘look at all these “valuable” figures you hold near and dear. There is nothing special about each individual piece except what you put upon them. Each and every one could end up here.’ As if they are asking us to lighten up and stop taking ourselves so seriously. I don’t think it is necessarily a mocking. Although it is hard to look inside here at figures you desperately wish to add to your collection and see how easily Disney artists take spray paint to them and toss them into a display. I just think this gives us a moment to pause and think about why we collect. I understand there will naturally be an aftermarket, but how important do these little 3″ pieces of plastic need to be in our lives? This display is very funny and wonderfully themed, but I think we would be remiss not to take a lesson from it as well. OK, enough preaching… do you want to see the rest of the display?

There were some signs posted on a chain link fence behind the conveyor belt. 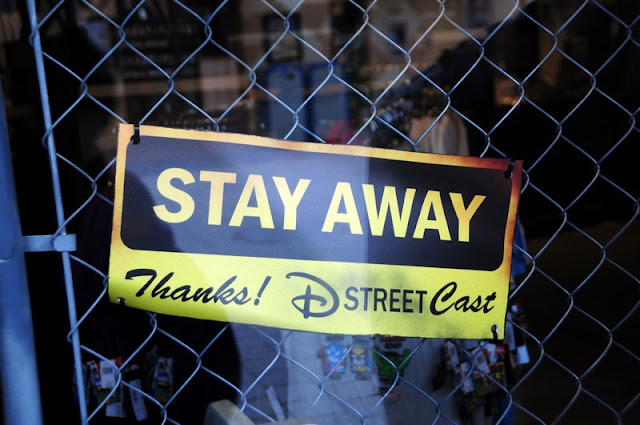 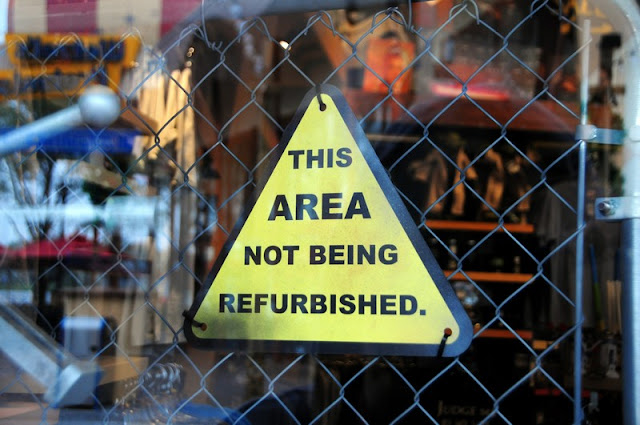 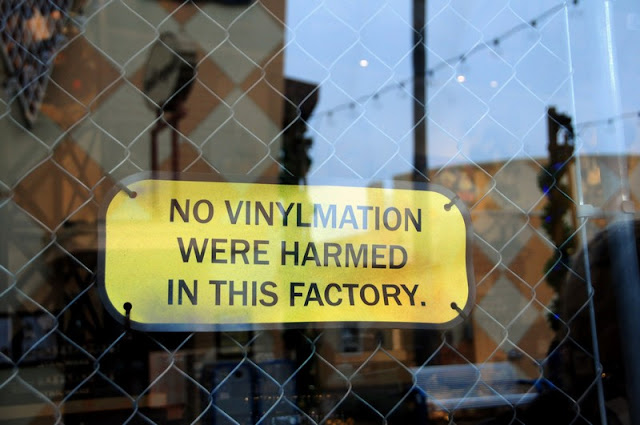 On the right hand side of the display were some mannequins in D-Street lab coats. 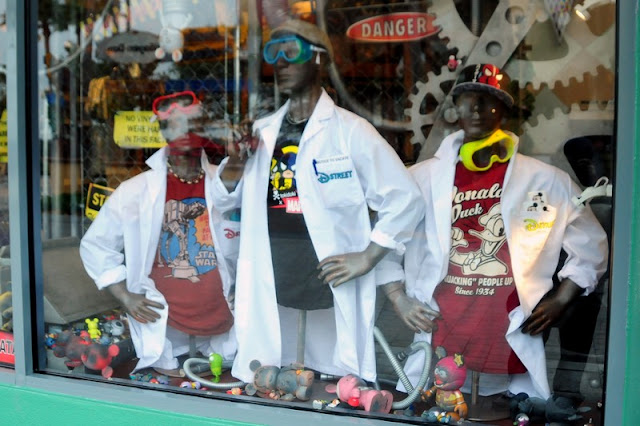 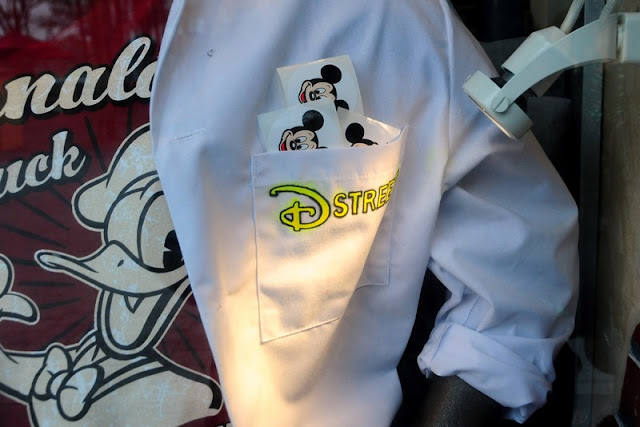 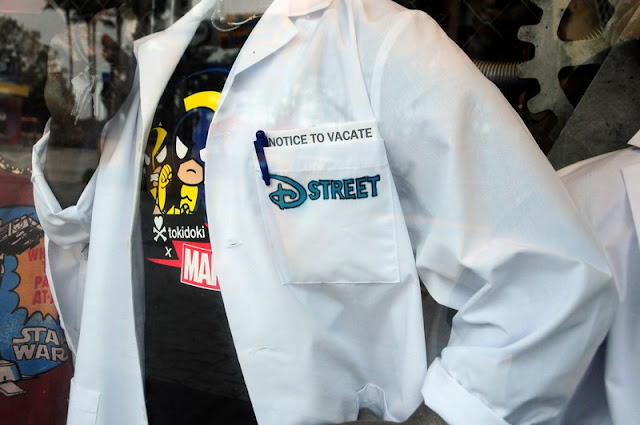 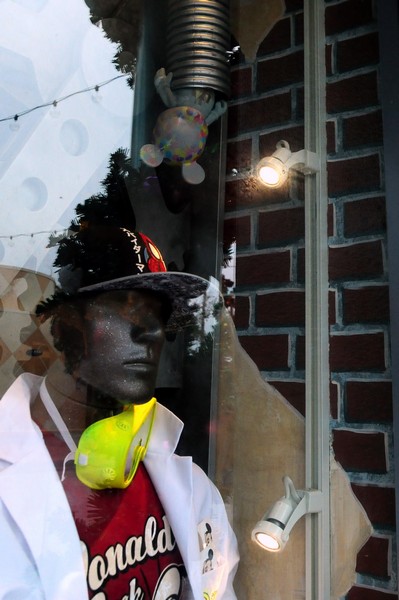 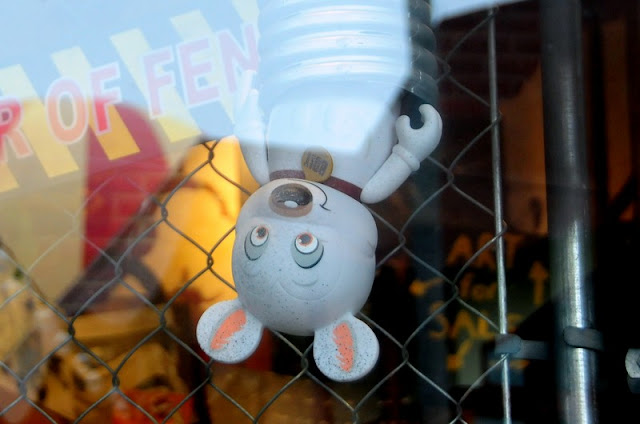 Up against the windows, there were a whole bunch of Vinylmation figures and parts scattered in disarray. 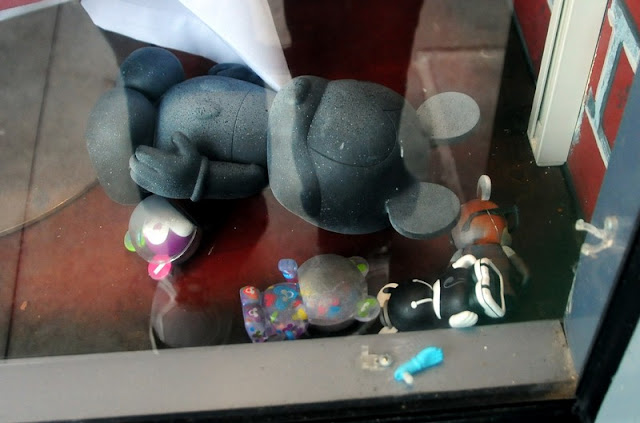 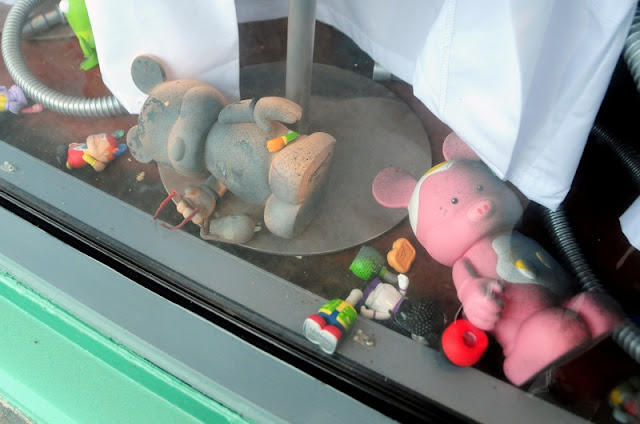 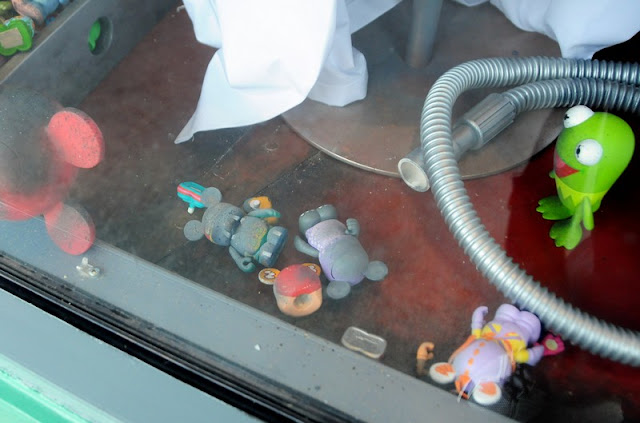 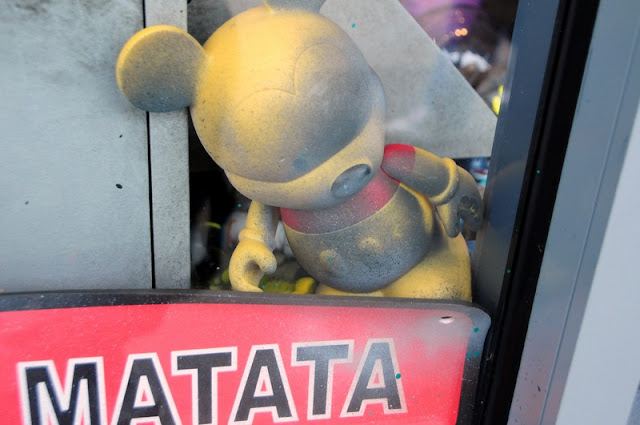 Here is a look at some rotations of the conveyor belt to see the various figures chosen for this wonderfully themed project. 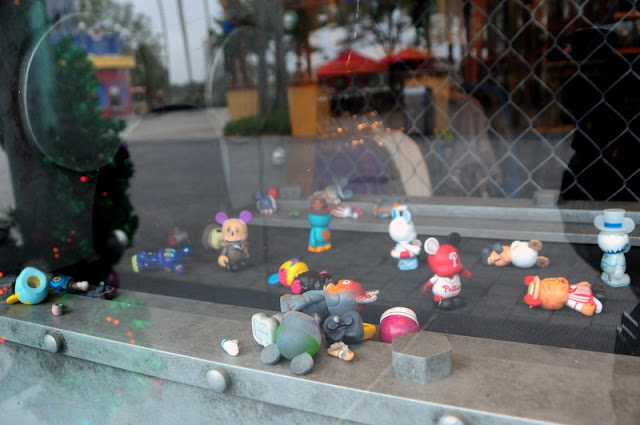 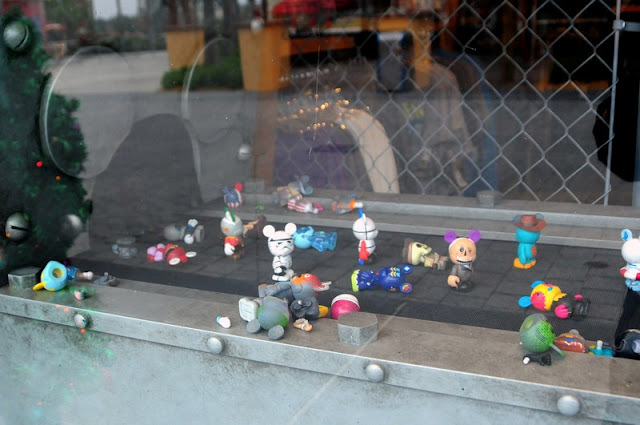 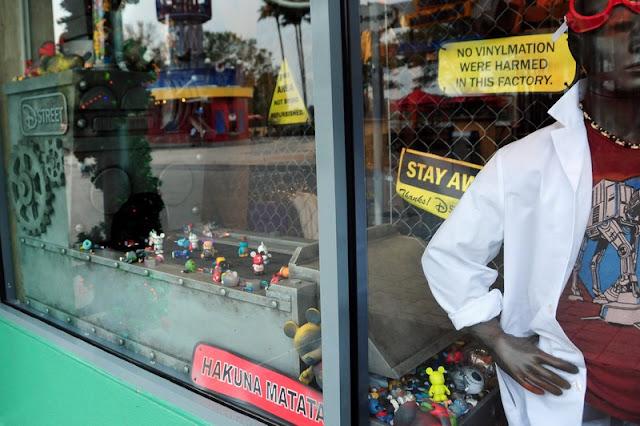 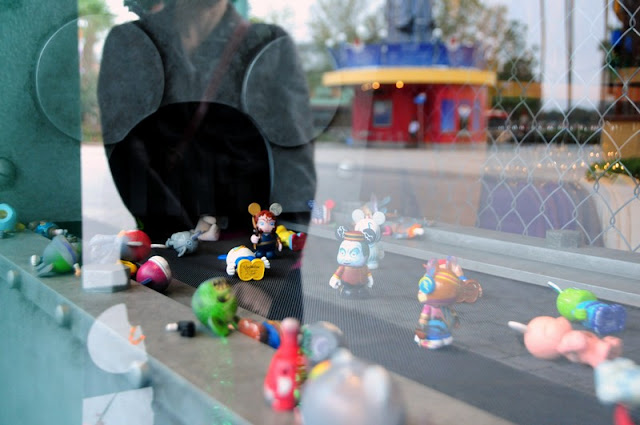 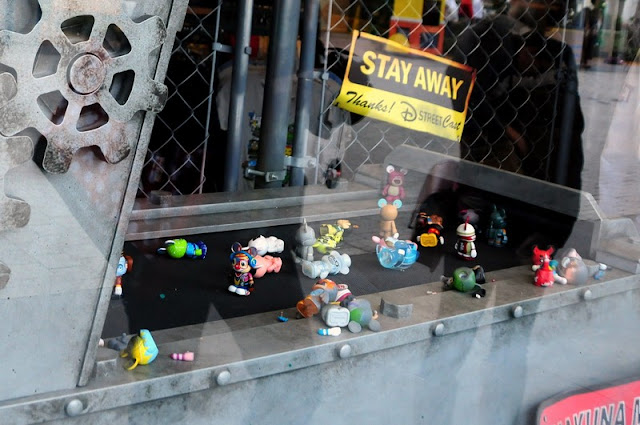 Yes, there is a Duffy, Park Starz Ghost Bride, Obi Variant and Moon Walking 80’s Dale among others. I love how Lotso is looking on from the side… very Toy Story 3ish of him.

I’m aware some will think these figures are being ruined, but the truth is, every vinylmation currently in the window was already being used for display at Dstreet (most of them were hidden up in high places). Now all vinyl collectors as well as daily average Dstreet guests can enjoy these figures they may never have had a chance to see.

I see your point, but the figures are now being used in a way for everyone to enjoy them instead of sitting in 1 person’s display case.

I just want to be clear. I love the display and take no offence to it. I know figures have been used to decorate D-Street since it opened. I’m just saying that the idea of marking them up and putting them on a conveyor belt… seems to make an artistic statement.

I am glad people are getting the Lotso reference I put in there though!

Please don’t take offense to them being marked, it is just a way of theming them to the rest of the display. The vinylmation that were chosen very carefully for the conveyor belt have not and will not be damaged in any way.

If that TOT vinyl ever wants rescued let me know. About the window – I guess I would have to see it in person. I wish it would be a real conveyor belt that would take all of the occupation and zodiac vinyls in the trade boxes and melt them down to become new vinyls — preferably a Park series. I wonder what is up with the “Notice to Vacate”? Hope that is just a fun gag and not a sign that Dstreet is packing up!

They should attach magnets and let us fish for them.

I take offense to that USC figure with the giant hole drilled into his stomach. SOMEONE AT THAT D-STREET MUST BE A BRUIN.

if you view the display from inside, you well see a hidden mickey made of cords.