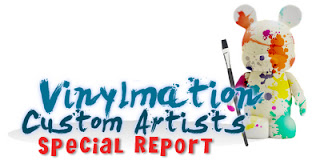 From time to time we like to post important Vinylmation news straight from the source. Custom artists read this, it’s very useful to know.

“First let me introduce myself, my name is Josh Edwards a.k.a. Crazy4Vinyls
and I have been making custom vinylmations for over a year now.  I’m not
sure how many I have created since I first started but what happened to
me recently took me by surprise.  I recently finished a custom 12 piece
Simpsons set that I created for a couple of reasons.  The first was my
love of the show and second I was inspired by a recent blue sky article
on Vinylmation Kingdom. After I finished the set I listed most of the
customs on ebay and thought nothing of it.   A few days went by and I
went to check on the listings and discovered that all of them were
removed except for one.  I saw in my messages that ebay was contacted by
20th Century Fox.  This was considered a copyright infringement.  I am
not here to argue what they did was wrong because Fox does own the show
and have the right to have the items removed. I was surprised because I
have created numerous non-disney customs but this was the first time
I’ve had items removed.

So the purpose of this
article is to let other artists out there be aware that these kinds of
things could happen as you create your next work of (non-disney) art!

Paint On!
Josh”Let us know if you’ve ever had problems selling your customs, we’d love to start a conversation about this.