Vinylmation Kingdom is reporting a few more names on the Disney Afternoon Series 2 list. They have info from a source who says to watch out for a second combo of both Darkwing Duck and Talespin and a first combo pack of Gummi Bears.

Duck Tales and Rescue Rangers have already been announced for series two. Gummi Bears is interesting because we saw “dumpster divers” a long time ago from a Hong Kong eBay seller. These were prototypes or tests produced but never meant for public consumption. They were trashed, but apparently some made their way out of the bin. 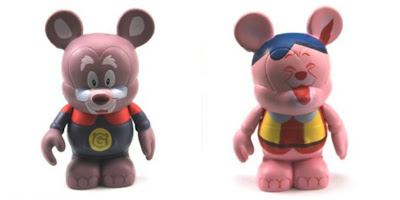 As far as a second Darkwing and Talespin set… what characters do you want to see?

I’m really excited for more Disney Afternoon Sets. Hopefully, they will be available online. For TaleSpin, I think Louie and Wildcat the mechanic would be an interesting set. Or they might do Don Karnage. Darkwing Duck and Duck Tales had quite a few crossover characters, so there’s actually a lot of major characters they can’t do. Maybe they would do Negaduck? I don’t know.

I want some Darkwing villains like Megavolt and Quackerjack.

Id take a scrapper on the original mold over anything they come up with on the new mold.