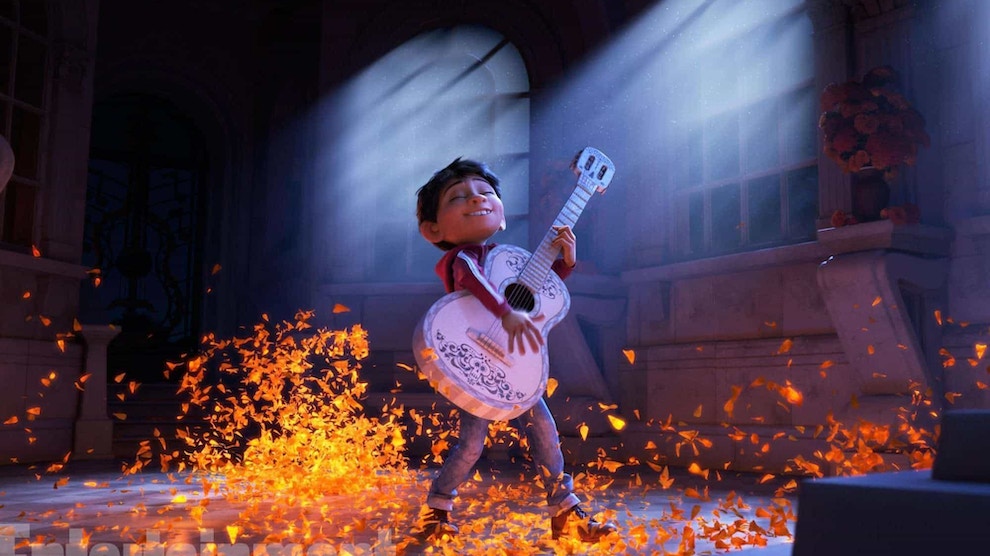 Disney has released the first official image (above) of the title character for the upcoming Pixar movie, “Coco”.

At the center of Pixarâ€™s next original film, Coco, is a 12-year-old boy whoâ€™s breaking all the rules â€” or at least his familyâ€™s.

Miguel, voiced by newcomer Anthony Gonzalez, is a member of the shoemaking Riveras, your average Mexican family thatâ€™s completely banned music for generations. So, maybe not so average. Ever since his great-great-grandmother Imelda was left alone by her husband (who abandoned his family to pursue a life hitting high notes), thereâ€™s been a strict no-music ban in the Rivera household, upheld primarily by Miguelâ€™s Abuela (Renee Victor).

That wonâ€™t stop Miguel from pursuing his passion, having grown up idolizing the music and advice of the late singer Ernesto de la Cruz (Benjamin Bratt). In fact, itâ€™s his worship of De La Cruzâ€”and a shocking discovery about himâ€”thatâ€™s brought Miguel to the singerâ€™s graveâ€¦and you, reader, to EWâ€™s exclusive new first look at Coco.

In the shot above, youâ€™re catching Miguel in a beautiful, pivotal moment: Heâ€™s just committed a literal grave act and borrowed â€” just borrowed! â€” the guitar hanging in De La Cruzâ€™s tomb. Unfortunately, itâ€™s Dia de Muertos, and Miguelâ€™s well-intentioned deed of grave robbery is badly-timed, and heâ€™s about to be inadvertently sent to the Land of the Dead, where heâ€™ll come face to face with the same great-great-relatives who banned music in his family. Just guess how happy theyâ€™ll be when they find out how he got there.

Still, donâ€™t call Coco Pixarâ€™s first musical. Director Lee Unkrich (Toy Story 3) says the film isnâ€™t â€œa break-out-into-song musical,â€ but rather, one â€œset against the backdrop of musical performance.â€ Moreover, itâ€™s not even Unkrichâ€™s first time choreographing at the musical rodeo: â€œAt the end of Toy Story 3, we had this moment where Jessie turns on the boom-box and the Gipsy Kings do a Spanish language version of â€˜Youâ€™ve Got a Friend in Me.â€™ Which, it turned out, ended up being a real precursor to this movie.â€

In telling a story about such a rich tradition as Dia de Muertos, Unkrich knew that Coco didnâ€™t just rest on one familyâ€™s history, but on an entire cultureâ€™s. â€œThe day John Lasseter gave the thumbs up for this movie, I immediately felt this huge weight drop onto my shoulders because I knew that we were doing something different than we had ever made at the studio and that for the first time, we were going to have this enormous responsibility to do right by this culture and not lapse into stereotype or clichÃ©,â€ he tells EW.

The result is that Unkrich secured an all-Latino voice cast (including Gael Garcia Bernal as a skeleton named Hector who helps Miguel on his journey in the Land of the Dead) and sought authenticity via numerous story consultants, key crew members and filmmakers (like co-director Adrian Molina), and musical talent culled from artists down in Mexico. Unkrich, Molina, and producer Darla K. Anderson made frequent trips south of the border (in fact, Lasseter approved the film just three weeks before one Dia de Muertos fell, spurring a first-time scramble to not miss out) and soon sent his story artists, production designers, and even sound crew down to take the aesthetic pulse of villages.

Of interesting note is that in Unkrichâ€™s efforts for cultural authenticity, an unfortunate misstep plagued the earliest announcements of Coco (which is titled after Miguelâ€™s grand-grandmother). In 2013, Disney filed an application to trademark â€œDia de Los Muertos,â€ back when Coco did not have its title, and the studio was harshly criticized for its attempt to co-opt the national holiday. As Unkrich explains, â€œThere was never any conscious effort to try to trademark a holiday because thatâ€™s crazy, and we would never try to do that. But it happened, and we regret it, and weâ€™re so sorry for it. And I know for all of us, it affected us really deeply. It was devastating, because we knew what we were trying to do and we had taken on this responsibility of trying to do everything right, and so it really was painful to know that the first public perception of our film had to do with that.â€

But, he says, good came out of it: â€œIt reinforced our desire to make sure that we reached out to as many experts as we could and to involve as many people in telling this story accurately. This is a story we want to share with the world, but itâ€™s also been particularly important to us that when the Latino community sees the film, that it resonates and it feels like we got it right, and thatâ€™s what weâ€™re really trying to do. We all feel the gravity.â€

I am unbelievably pumped for this flick. The soundtrack is destined to be amazing.

Wow, what incredible direction is Pixar taking with this movie. Guess they’re tired of making good films. Or someone made a bet to see if they could do something worse than Cars 2

Vote Up0Vote Down
First TV Spot Released For Disney’s “Beauty And The Beast”
VIDEO: Full Behind the Scenes Look at Pandora: The World of AVATAR