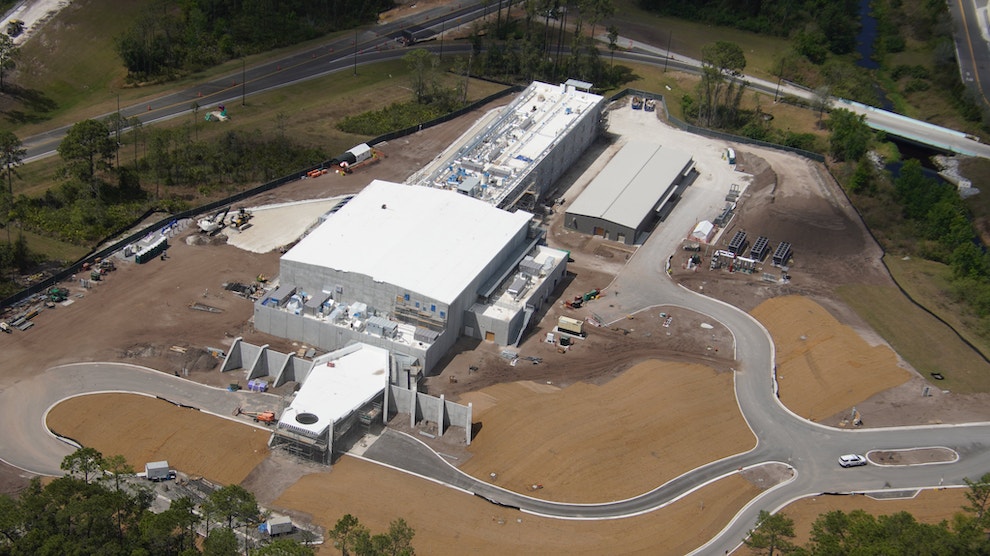 Walt Disney World is currently experiencing an unfortunate, yet historic time as for the first time ever, all of its parks have now been closed for over a week. With construction now fully halted across property, many projects are now at a standstill, and that includes the Star Wars: Galactic Starcruiser immersive resort experience, colloquially known as the “Star Wars hotel.” The last time we took an aerial tour of the Starcruiser site was back in January, and thankfully, things have come a long way, with most of the terminal, lobby, and guest cabins seemingly finished, at least on the outside. (However, here’s to hoping it doesn’t become another “Legendary Years” in light of budget cuts and delays in a post-Coronavirus closure Disney World.)

As always, we bring you these aerial images courtesy of our friend @bioreconstruct, who’s taken to the skies to cover the resort closure from a bird’s-eye view. (For more amazing aerial photography of all Disney Parks and beyond, make sure you check out his page and give him a follow for some very unique content!) Without further ado, let’s hop on an X-wing and head on over for a look (down) at the current state of the Star Wars: Galactic Starcruiser.

As we near the site of the Starcruiser, you can see the now-demolished former “Filmstrip” bridge that used to be the entrance to Disney’s Hollywood Studios. It’s likely that these same roads will eventually be reworked to become an entrance and/or exit ramp just for those entering or leaving the Starcruiser, albeit with some kind of security gate to keep hordes of inquisitive travelers from just passing by to gawk at the hotel once finished.

Once fully developed and landscaped, a lush tree line will block guests’ view of the actual hotel as they arrive. These trees will be planted along raised berms to further the visual illusion. (A similar version of this effect is employed in the DINOSAUR show building at Disney’s Animal Kingdom.) As for the terminal itself, below you’ll see concept art depicting what it will look like upon completion. The circular cut-out will be lined with futuristic LED lights, plus an illuminated resort logo on those first diagonal walls at the front of the terminal. 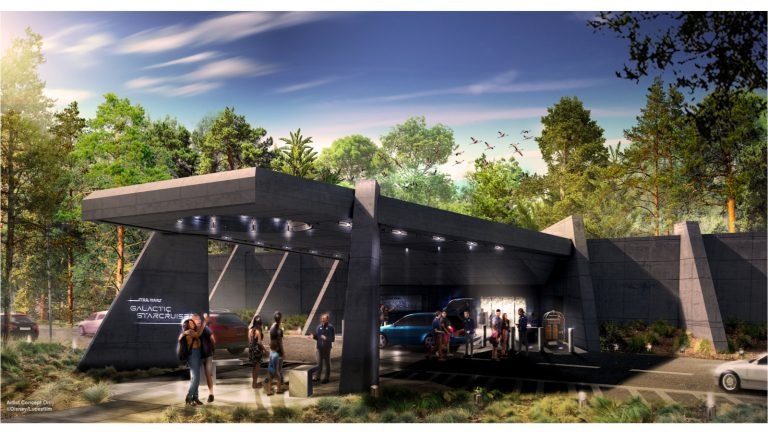 It’s at this Terminal where guests arriving can unload their belongings and travel through the pre-show into the Halcyon’s atrium. As far as parking goes, a limited number of on-site parking will be available for guests, with a driveway leading out to the parking lot at Disney’s Hollywood Studios. Here’s how Disney describes the arrival experience for the Starcruiser:

The guest cabins have since been completed, with what seems like an opening at the junction between the cabin wing and the main lobby, likely to bring in any large fixtures or furnishings. While it may look like the cabins have windows, each room will offer virtual views out into the galaxy.

You can see that the hotel design follows the blueprints shown back in August almost identically. The main lobby atrium leads to the long, rectangular guest area cabins, which have now been closed off with walls.

Off to the right-hand side of the resort are all of the support and maintenance buildings for the hotel. After all, it can’t be powered off of coaxium alone.

For an exclusive full tour of floor plans and concept art for the new Star Wars: Galactic Starcruiser, including the hotel lobby layout, guest rooms, and more, click here. And if you’re just about ready to hand over all of your money to Disney, click here for expected pricing for the 2-night, 3-day all-inclusive Starcruiser experience.

Start banking those credits now, because you’re going to need to steal a lot of coaxium to afford to stay aboard the Halcyon. What do you think of the resort’s progress so far? Do you think Disney will be able to achieve a seamless immersive experience, or will those plans now fall behind due to the latent effects of COVID-19?