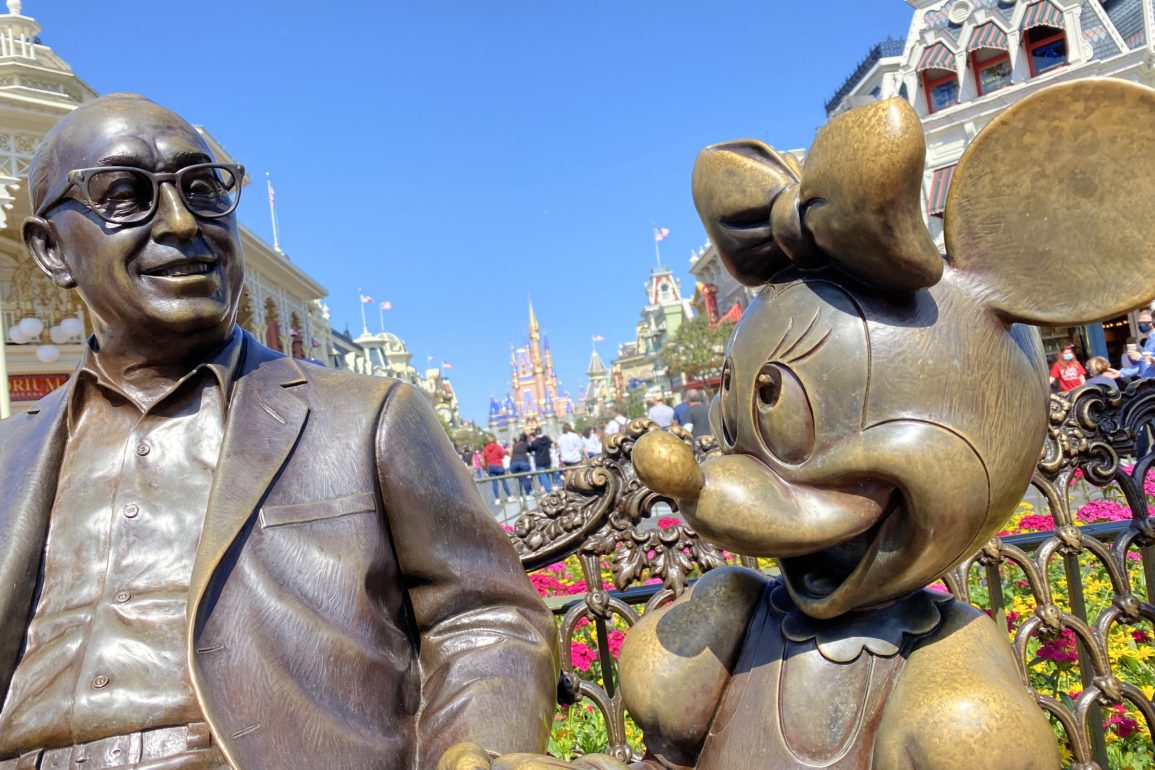 Hello from a cooler but lovely day at the Magic Kingdom! With storms rolling through the area last night, temperatures were lower today than they have been recently, but it was still a lovely day to spend at the Most Magical Place On Earth. Let’s get started!

When we arrived at the Transportation & Ticket Center, we noticed new physical distancing markers were being installed in the queue for the EPCOT Monorail. We had hoped that this might mean that this Monorail line would be opening soon, but it looks like that may not be happening now. For more pictures and information, check out our article here.

Once inside the park, we got a closer look at the new construction walls and scrim fabric that we saw installed on the Cinderella Castle Stage yesterday. We look forward to following this refurbishment project as it progresses.

We saw the beginnings of a dam being constructed in the west side of the moat surrounding Cinderella Castle. For more pictures and information, check out our article here.

Checking on the Tomorrowland Transit Authority Peoplemover, we found the “Closed For Refurbishment” signs were still out in front of the attraction. We saw Cast Members testing the ride throughout the day, although we did not see any occupied ride vehicles during these tests.

Over at Peter Pan’s Flight, scaffolding and scrim has doubled in size recently. We’re interested to see how far this construction wall will go before work will be completed.

We found two new spots of concrete work around the park today. The first was in Tomorrowland, just outside of Auntie Gravity’s, and the second was close to the outdoor seating area for Cosmic Ray’s Starlight Cafe.

We have an interesting update on the mural at Bonjour! Village Gifts for you. A few days ago, we reported that the planters had been removed from around the building, and that painting seemed to have been completed. At that time, the mural on the side of the building had been painted over, but was still faintly visible under the green paint. Today, we found the mural is being gradually repainted on top of the new green color. We’re glad to see that this element of theming hasn’t been lost forever!

Additional plexiglass dividers have been added to the queue of Pirates of the Caribbean to aid in physical distancing while increasing capacity within the covered queue space. For more pictures and information, check out our article here.

We saw the “Injun Joe” raft out today on the Rivers of America. With several Cast Members aboard, it was either testing the raft, or training for the Cast Members.

Though previously known to be slated to remain through Valentine’s Day, we found Cinderella’s Carriage still out for guests to enjoy today. We asked a Cast Member how long we could expect it to stay, and were told that it is now expected to remain in place through mid April.

We had some interesting merchandise finds today, starting with this still-shocking sight of two different Minnie Mouse: The Main Attraction Loungefly mini backpacks available at Uptown Jewelers. They’re limiting purchases to three bags per person, but even with this limitation, these bags have lasted far longer than we expected.

We found the perfect new picture frame to house your favorite park moment. This frame is available at The Emporium for $24.99.

We found four new Funko POP figures featuring Wanda and Vision in their 1950’s look and their classic Halloween costumes, both from the Disney+ Original Series “WandaVision”. For more pictures and information, check out our article here.

Next, we found a new infant accessory set featuring castles and princess icons along with their signatures. This set is available at Sir Mickey’s for $13.99.

Also at Sir Mickey’s was this fun, all-over-glitter backpack featuring the new princess castle artwork that has been cropping up on new items recently. It retails for $34.99.