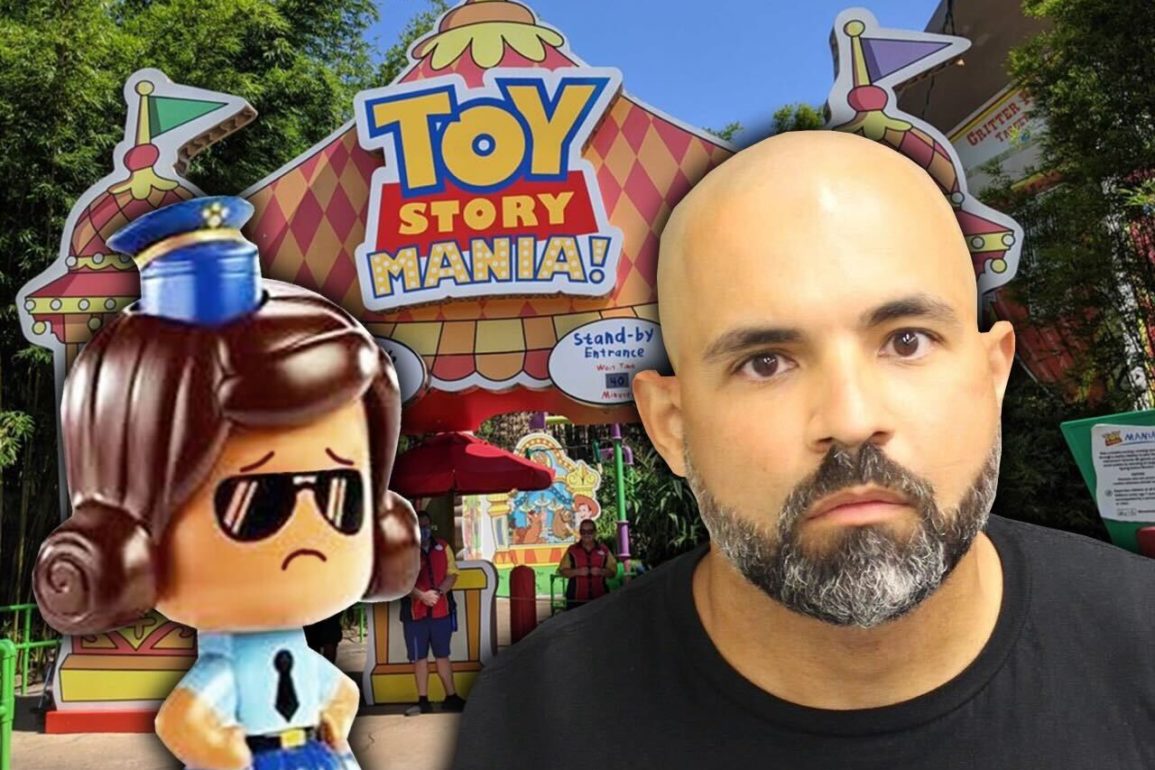 Man States He Was Punched By Young Boys After Telling Them He Has Brain Cancer, Others Say He Assaulted A Minor at Toy Story Mania Ride in Walt Disney World

Toy Story Mania is the scene of the latest Walt Disney World fight breaking out between strangers this summer.

Ramon Aponte Jr., a 41-year-old from Clifton, New Jersey, told Disney employees he had been assaulted and asked them to contact law enforcement on July 8.

When the sheriff’s deputy arrived, Aponte told his side of the story. Aponte ended up getting arrested for child abuse, and a boy complaining of a concussion was taken to a Central Florida hospital, according to an Orange County Sheriff’s arrest report.

How it all began, Aponte claimed, was he and his family waited in line for the shooting game ride at Hollywood Studios. Aponte said he saw two males jump the line and then ransack the 3D glasses bin, knocking some of the items to the ground. Aponte said he picked them up and then gave the boys a stern word, telling them to calm down. The two males swore at him, Aponte said. But Aponte said he ignored them and continued to wait in line with his wife and children. But it didn’t end matters, according to Aponte’s version of events.

The two males heckled him from two lanes down, even though Aponte reminded them there were children around.

Aponte said he walked up to them and told them to stop, but one of the boys got into his face. Aponte ordered him to back up because Aponte said he has brain cancer, the report said. The report never confirmed whether or not Aponte was sick.

The boy got closer instead, and Aponte pushed the male back. Then the male punched him, Aponte said.

Aponte said he got struck on the left side of his face.

The sheriff’s deputy interviewed the two males – a 17-year-old named Dylan and another unidentified male whose personal information is redacted, but the boy is under 18.

Dylan said he and the other boy were spreading the 3D glasses out so it would be easier for people to pick them up.

They reached the ride’s boarding area and told an employee their ride party was for “2.”

Aponte lunged at the other boy and choked him. The boy punched Aponte to defend himself, Dylan said.

All three of them were ordered out of the ride queue.

Once outside the ride, Aponte ran up to the unidentified boy and shoved him into a pole. The report said the boy fell on the ground, landing on rocks. According to Dylan’s interview, the boy attempted to get up but stumbled into a wall after hurting his head on the pole.

The boy told a deputy he was in pain and thought he had a concussion. He was taken to Celebration Hospital for treatment. He had cuts on his leg, arm, and knee from falling, a small cut on his right ear, and blood on his shirt, the report noted.

Several Disney employees witnessed the verbal confrontation on the ride and saw Aponte as the aggressor pushing the boy in the queue first. Some saw him push the boy into the pole outside.

Aponte was put into handcuffs and taken to the Orange County Jail, the arrest report said.

According to online records, Aponte has not been charged in Orange Circuit Court as of Monday. The state attorney’s office did not have any public documents to release when we asked about the incident.

Aponte declined to comment Monday evening when we reached out to him and referred us to his attorney. His attorney did not immediately respond to a message.

Toy Story Mania’s queue was also the site of a caught-on-camera fight in January this year.