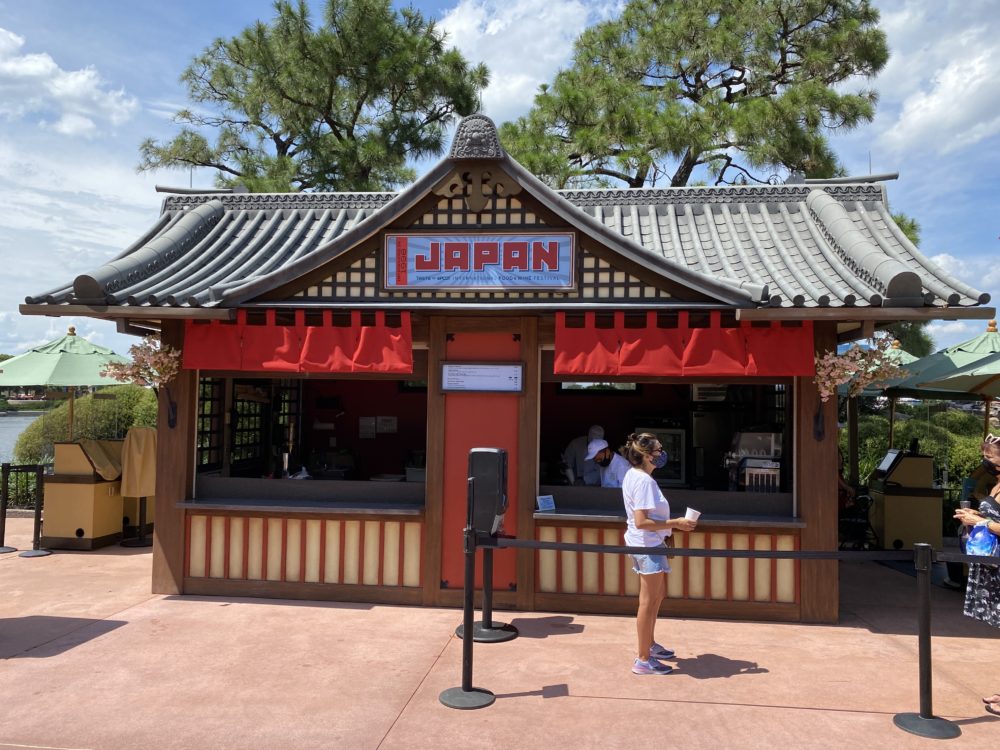 Both the Strawberry Nigori Sake and Furano Martini appeared at Hanami at the 2020 EPCOT International Flower & Garden Festival.

Inside of this delicately-prepared bao bun is a good amount of shredded chicken tossed in a sweet teriyaki sauce. The menu description says there’re vegetables in there, but there’s far more chicken than vegetables—and that’s a good thing! There’s a lot of value here in the relatively large portion for the price, especially in EPCOT Festival terms. It’s a tasty and safe bet for this year’s festival.

This dish gives you a big portion, with two shrimp and a vegetable cake. It’s a very good value for the price. The tempura shrimp was well prepared. The batter on them was a little thick, but that didn’t bother us. The kakiage was great, and was much better than the what we usually get at Japanese restaurants, like a tempura sweet potato. It wasn’t greasy at all, which we liked. The rice was the same as the sushi rice, and worked really well in this dish as well. The only downside for less adventurous eaters was the mound of furikake, or dried seaweed shreds on top. It looks nice, but those inexperienced with Japanese cuisine may find it odd or difficult to eat. Other than that, we definitely recommend this.

The noodles in the ramen were overcooked and soggy because they just sit in the broth, but the broth itself was good and practically saved this dish due to its strong, umami-packed dashi taste.

The froth was nothing to be afraid of, surprisingly enough. When you see it, it looks intimidating, but it was a nice touch to a great broth. It’s a real letdown that the noodles were so soggy, though.

The chirashi was very fresh, and always gets points for presentation. The salmon is slightly marinated, and super flavorful. The salmon roe didn’t add much here, and we would’ve preferred that they just leave it out. It didn’t have a distinct flavor, so it merely acted as just filler for the tiny pot of fish and rice. The rice was prepared well. It was sticky, with just a bit of poke sauce on it.

From Untappd: “Samurai Sencha Ale is a witbier style ale that is infused with traditional Japanese flavors. We start with a foundation of floor malted pilsner barley malt and flaked wheat with a touch of flaked oats for a body that is remarkably smooth while remaining light on the palate. The beer is then hopped with Japanese hop variety Sorachi Ace, which is known for its unique flavor of lemon and herbs. The traditional witbier spices coriander and orange peel are used in addition to ginger root, lemongrass, and sencha green tea prior to fermentation with a traditional Belgian style yeast. The result is a beer that is familiar to witbier lovers but adds an exciting Japanese twist. Kanpai!”

According to Kirin Ichiban, their beer boasts an “all malt formula using only the finest two-row barley malt. European noble hops. A distinctively rich flavor, smooth finish, no bitter aftertaste.”

The strawberry sake was awful. None of us enjoyed it. It’s just got a harsh taste that makes it hard to drink.

The martini was delicious. It wasn’t too sweet, but you could taste the alcohol. This was a great option from a overall impressive Marketplace.

The Japan Marketplace booth is logically located adjacent to the Japan Pavilion on the World Showcase Promenade.