Concept Art For The Holiday Addition to The Magic, The Memories, and You

From Shawn Slater on the Disney Parks Blog:

This is my favorite time of year in the Disney Parks. The air is cool, holiday decorations are going up and all the fantastic, seasonal entertainment is ready to debut. And this year, our Creative Entertainment team has something new to unwrap!

Since its premiere last January, our projection show “The Magic, The Memories and You!” has been wowing guests. Each night the show is presented, the faces of Cinderella Castle at the Walt Disney World Resort and “it’s a small world” at the Disneyland Resort have been transformed with magical special effects, animation and images of our guests captured by Disney PhotoPass photographers during the day.

For the holiday season, we’re updating one of the segments of the show with a musical score filled with favorite holiday tunes and pictures of guests celebrating in the parks. Starting tomorrow in Magic Kingdom Park, Cinderella Castle will appear to be wrapped in gift paper and bows, covered in candy stripes and more! 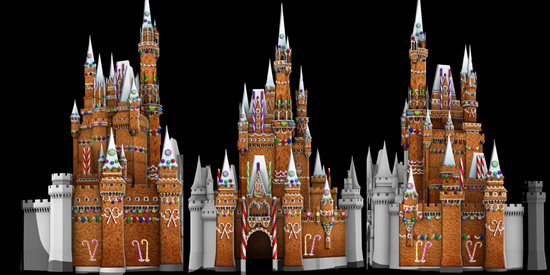 These photos give you an idea of the fun in store. They’re of some of the actual mattes that will be projected on the surface of Cinderella Castle. “The Magic, The Memories and You!” art director, Tom Zofrea, created these images in such a way that, when projected from various points around the park’s Central Plaza, they produce the effect that the Castle is built from gingerbread. 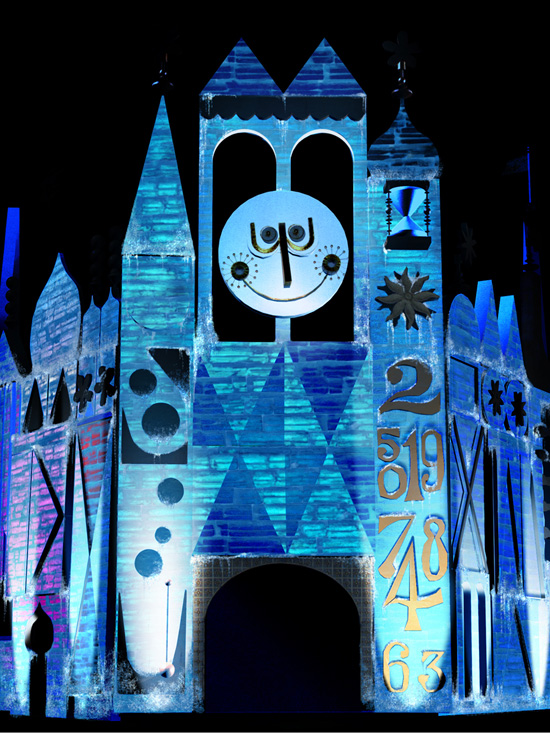 At Disneyland park, the holiday segment of “The Magic, The Memories and You!” begins Nov. 18, turning the façade of “it’s a small world” Holiday into a giant snow globe and an icy winter wonderland, among other surprises. The attraction will even get its own gingerbread treatment. Looks delicious!