I finaly get a look at what will be hanging around my neck as I crawl around WDW on January 13. 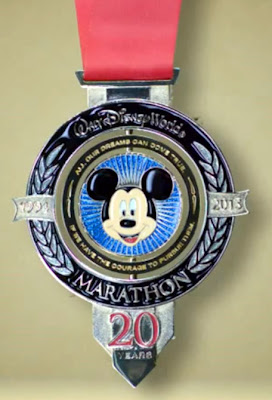 runDisney has revealed the commemorative 20th anniversary Walt Disney World Marathon finishers medal that runners will get after finishing the 26.2 mile course.

The medal’s design features a circular shape with two spinning elements. The inner medallion features both a classic and a modern image of Mickey Mouse! The spining ring that surounds it has two inspirational quotes from Walt Disney himself.

“All our dreams can come true, if we have the courage to pursue them.” And “I only hope we don’t lose sight of one thing… it was all started with a mouse.” 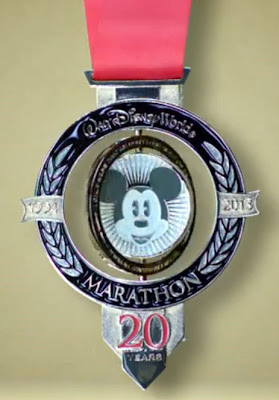 “For 20 years runDisney medals have set the standard in the running industry,” said Faron Kelley, Director of Marketing and Communication for Disney Sports.  “This medal builds on that rich tradition and is an extraordinary keepsake that celebrates the 20 years of marathon experiences for people from around the world who have run in this time-honored event.”

The unveiling of the medal culminates a two-week runDisney social media campaign – “The Great Medal Caper’’ – in which fans unlocked clues about the design of the medal.

The marathon weekend, which is expected to draw a sellout field of more than 20,000 for the 26.2-mile marathon, will again feature Kids’ Races throughout the weekend, including the Mickey Mile, a Family Fun Run 5K on Friday, the Half Marathon on Saturday and the Marathon on Sunday.  There is also Goofy’s Race and a Half Challenge which involves running the Half Marathon and the full Marathon – 39.3 miles!  The Health and Fitness Exporuns throughout the weekend at ESPN Wide World of Sports Complex and features the latest in running technology and fashion, as well as renowned running experts such as Jeff Galloway, the official training consultant for runDIsney.

For more information and to register for the 20th anniversary Walt Disney World Marathon Weekend or other runDisney events, go to www.rundisney.com.