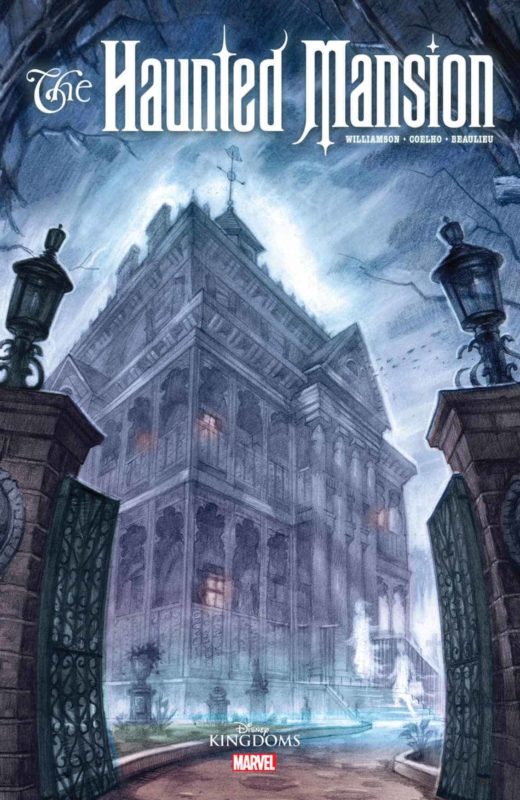 As Walt Disney once said about Disneyland’s Haunted Mansion, “We take care of the outside – the ghosts take care of the inside!” While he was referencing to the pristine architecture, you can also apply it to the way they take care of some their most beloved attractions. The Haunted Mansion is no different – with multiple books and stories centered around it, you can never run out of material. Imaginations can run wild when it comes to drafting creepy-crawly stories about the famous mansion, and this isn’t the first review I’ve written about exactly that: my favorite Mansion.

This is a book from the Disney Kingdoms series, which also includes Big Thunder Mountain Railroad and Enchanted Tiki Room!

These are billed as having “Marvel’s flair for action” with all the thrills of being a Disney attraction. This series is done comic-book style, following Danny Crowe as he crosses the threshold of the ‘foreboding abode’, but when personal tragedy strikes the lonely boy, a rescue mission requires him to summon all his courage and resolve and step through the Mansion’s massive, creaking doors. His imagination goes wild as he sees stretching paintings in the doorless and windowless chamber! Some of our favorite characters return to give Danny a proper ghostly welcome, such as Madame Leota, the Hatbox Ghost, and the Hitchhiking Ghosts, but alas! These are our happy haunts! But, our friends are now cursed by a Pirate Captain whose hate and anger is infecting them. Danny is their last hope for freedom, but only if he can avoid being turned into a bitter character in our story, and turning into the most wanted 1,000th resident. But, wait… Constance the Bride has also set her sights on Danny. Can he avoid both villains and not fall victim to the Pirate’s curse and not become yet another dearly-departed for our dear Constance? I can’t tell you, but I can guarantee you’ll love this vivid book, filled with chilling excitement and mystery. After all, they have been dying to have you.

(as of March 28, 2022 15:05 GMT -04:00 – More infoProduct prices and availability are accurate as of the date/time indicated and are subject to change. Any price and availability information displayed on [relevant Amazon Site(s), as applicable] at the time of purchase will apply to the purchase of this product.)