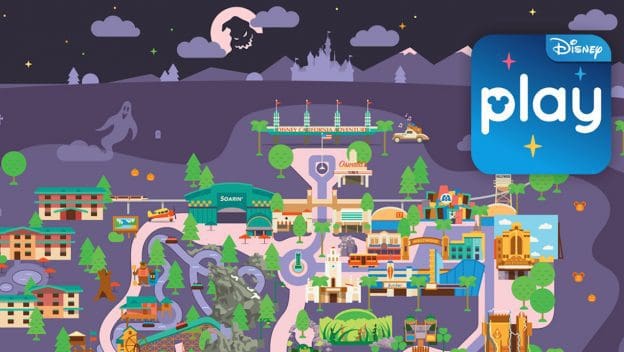 The Disney Play app isn’t even a year old and it’s already gotten its first overlay! For the Halloween season, Disney announced the app will now feature spooky and ghoulish surprises and games for both the Disneyland AND Walt Disney World resorts through October 31. For Disneyland, the app will now have ride achievements for Space Mountain: Ghost Galaxy and Haunted Mansion Holiday, a new music playlist around Haunted Mansion Holiday themed around Disney Villains, and other surprises (keep an eye out for Jack Skellington and Oogie Boogie on the maps for both parks). For Disney World, a new ride achievement for the Haunted Mansion and a new music playlist entitled “Trick Or Treat Tunes”.

It seems like this has been a plan for the Disney Play app since the beginning (which makes me curious about their christmas offerings), and I am all for anything that invokes the spooky atmosphere that Disney just doesn’t do a lot of these days outside of the parks. A small touch, but one a lot of us will enjoy greatly as we move further into the Halloween season!