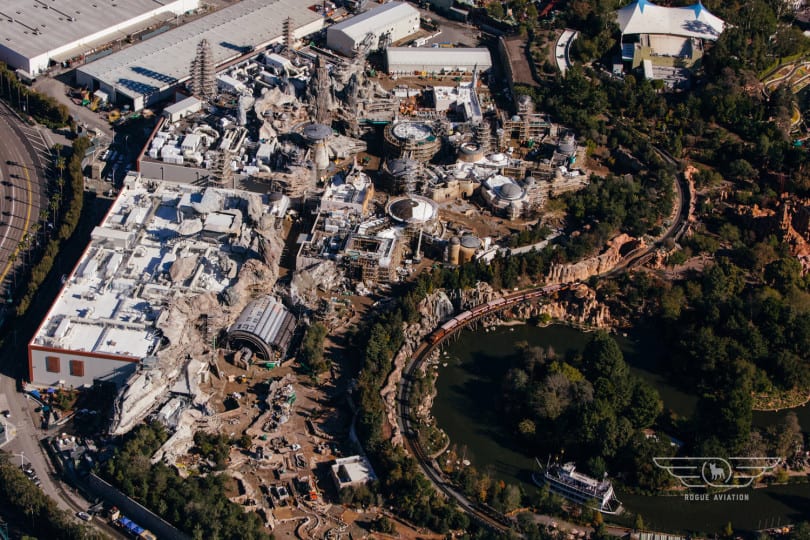 Star Wars Galaxy's Edge continues to take shape next to the Disneyland Railroad and the Rivers of America in this Dec. 7, 2018 aerial photo. (Courtesy of Rogue Aviation)
Home
Parks & Resorts

Everyone is anxiously awaiting Star Wars: Galaxy’s Edge, which could be the most highly anticipated addition to the Disney Parks in a long time. New aerial video and photos of the construction in Disneyland show how far the construction crews have come with putting together the Rise of the Resistance and Millennium Falcon attractions.

You can see that there has been a lot of work on the “rocks” that will form the backdrop to the entrance of the Rise of the Resistance attraction. You can also see the scaffolding around the circular buildings. These make up the Black Spire Outpost.

You can get a better glimpse of the land as a whole in the photo above and a more detailed look in the photo below.

One of the most exciting images shows the Millennium Falcon itself, which will be part of the flight simulator attraction The Millennium Falcon: Smuggler’s Run. Guests will experience being in the cockpit of the ship, battling Imperial fighters with the goal of bringing back goods to a space pirate.

PHOTOS: Some Areas Cleared of Dirt During Construction of Journey of Water Inspired by 'Moana' at EP...February 15, 2022
Duffy & Friends' Tasty Summer Surprise Coming June 16 to September 7 to Tokyo DisneySeaMay 24, 2022
Disney's Typhoon Lagoon Closing February 9 and 10 Due to Cold WeatherFebruary 8, 2022