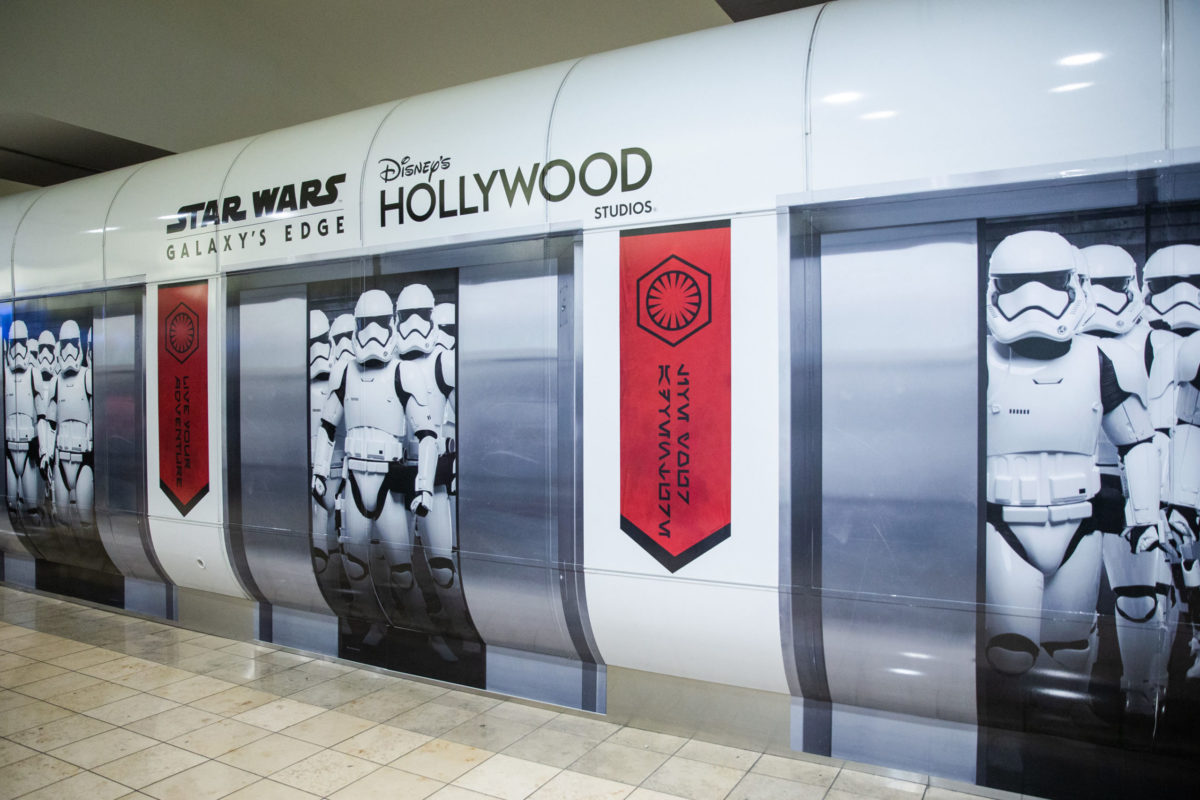 The Force is strong today throughout Orlando International Airport with the debut of new décor that helps travelers feel as if they’ve stepped into Star Wars: Galaxy’s Edge, the new 14-acre land inside Disney’s Hollywood Studios at Walt Disney World Resort in Florida. It seems the Galaxy’s Edge themed edge construction walls we spotted earlier this week were a part of this larger installation. 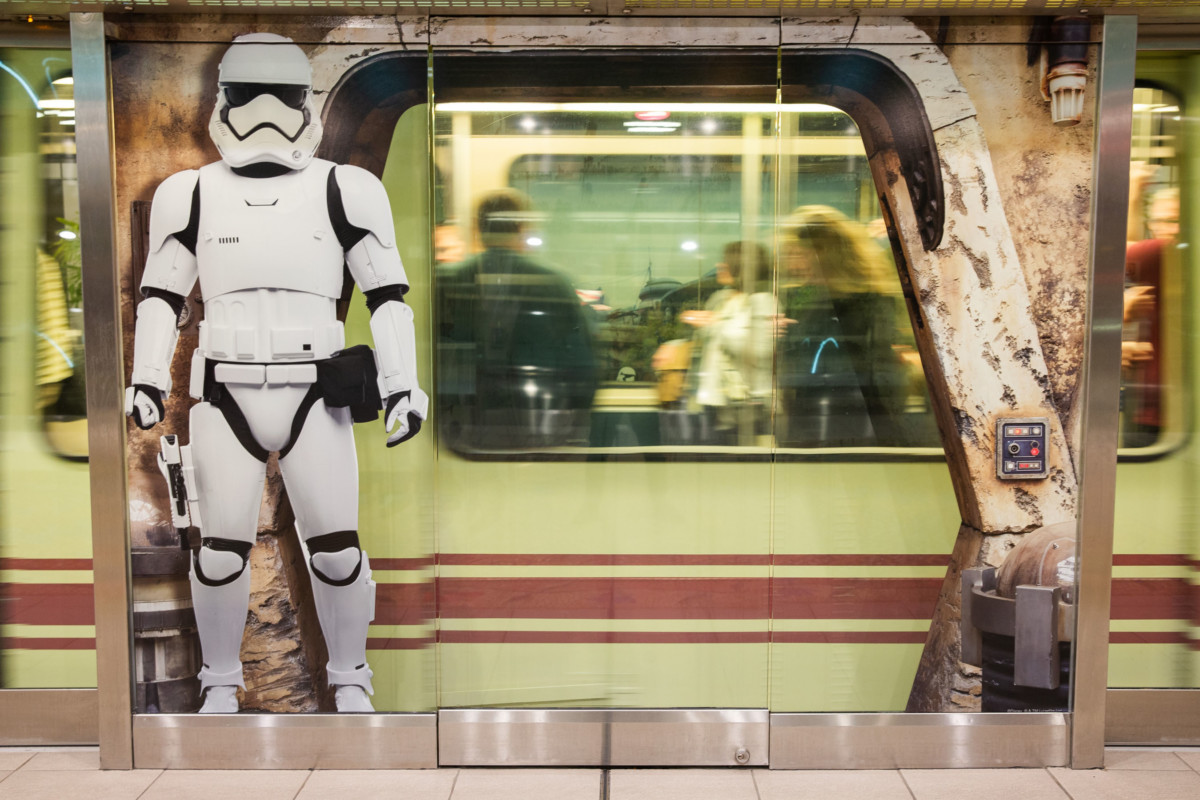 Disney is the first organization the airport has invited to create artistic renderings that wrap shuttle stations within the airline terminals. It’s a creative first for Central Florida’s major transport hub that welcomes nearly 50 million passengers each year. 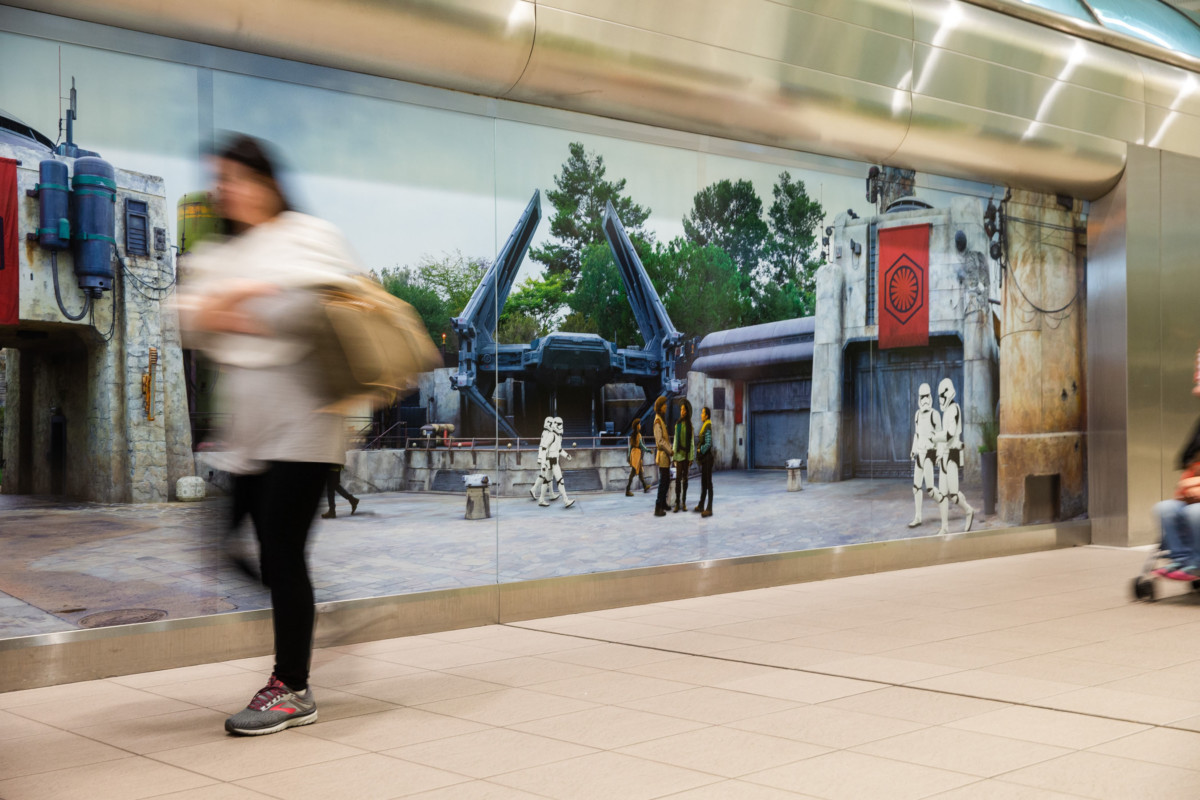 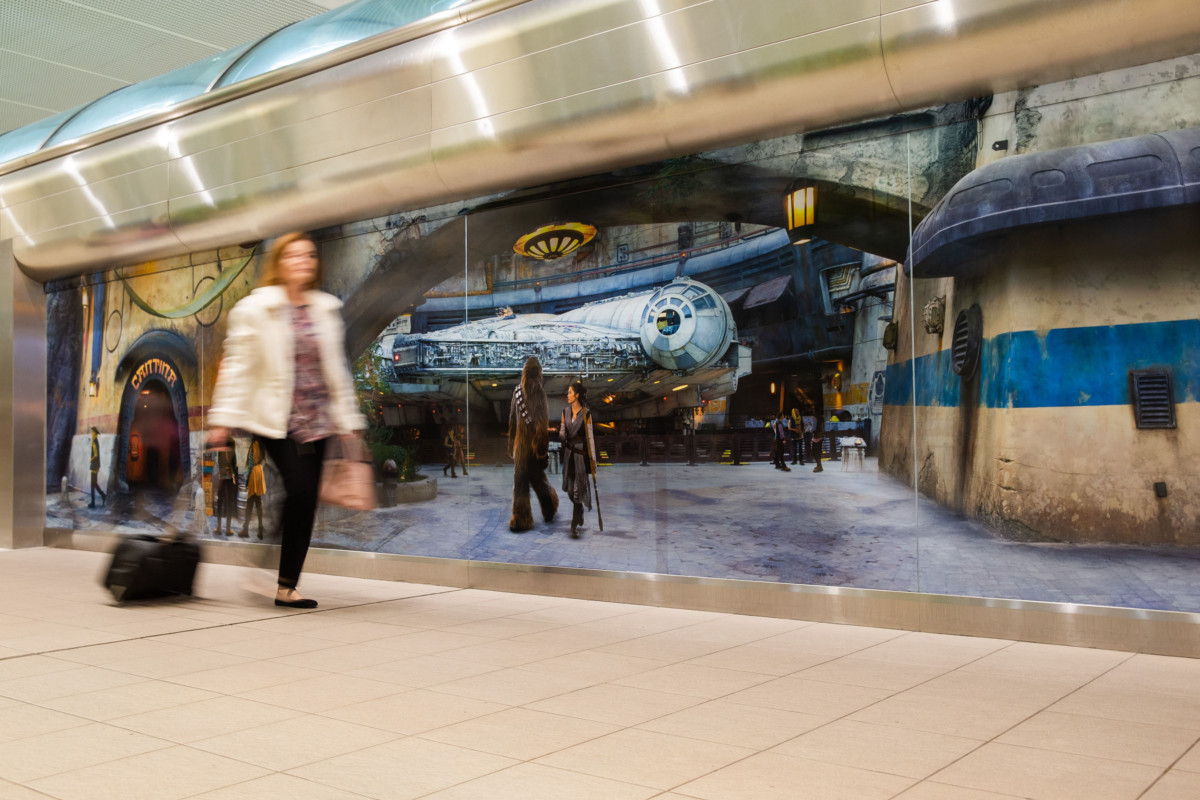 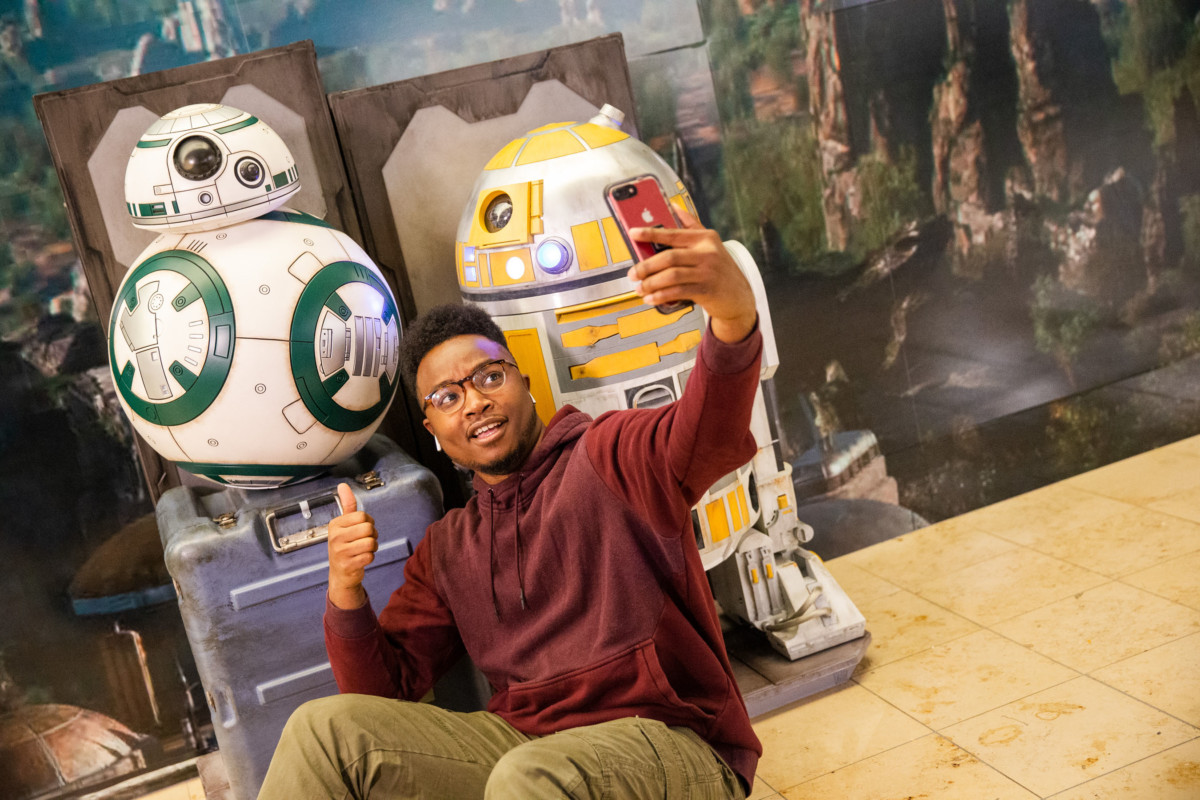 “We are constantly evolving the airport experience to make it more service oriented, passenger friendly and fun,” said Raymond Anderson, senior director of concessions and properties for the Greater Orlando Aviation Authority. “This new installation provides a preview of what vacationers and business travelers alike can expect at Walt Disney World. It’s also the most recent in a long line of collaborations between the airport and Disney over the decades.”

“Our Star Wars: Galaxy’s Edge art installation reflects how very special the Walt Disney World Resort and Orlando International Airport relationship is,” said Claire Bilby, senior vice president of sales, services and events for Walt Disney World. “We’ve had a string of fruitful projects with the airport, like having two supersonic jets land simultaneously to celebrate the opening of Epcot in 1982, creating the groundbreaking Disney’s Magical Express service in 2005, today’s first-of-its kind art installation and so much more. The airport is Central Florida’s ‘welcome’ to visitors from around the globe. We’re honored to put our Disney magic to work in making that welcome exciting and memorable.” 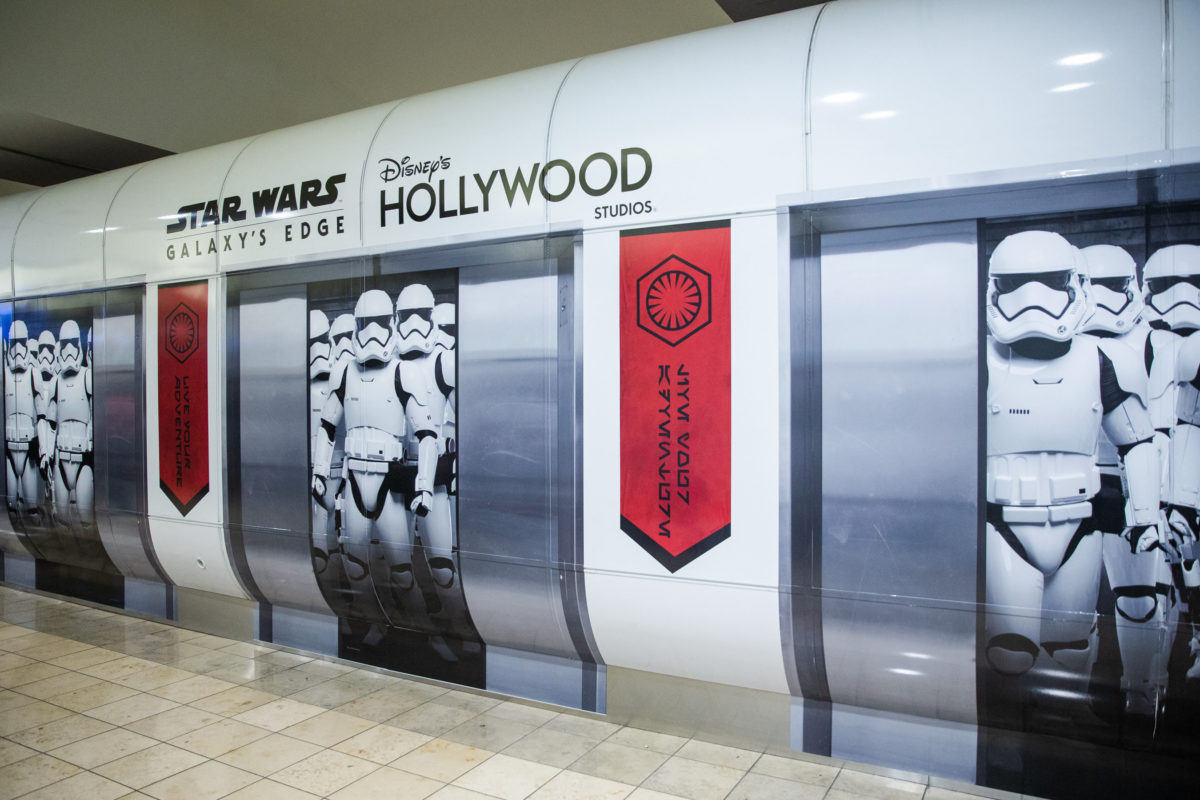 As travelers arrive in Orlando and prepare to board shuttles for the airport’s Main Terminal, they will see life-size depictions of Star Wars: Galaxy’s Edge that look as if visitors could step right into the new land.

One scene creates a dimensional landscape that feels as if visitors are standing inside Star Wars: Galaxy’s Edge, where travelers can see the iconic Millennium Falcon and other landmarks from the new land. In another scene, it appears as if First Order Stormtroopers are waiting to step off the shuttle as the train arrives in the station.

Combined, these artistic representations of Star Wars: Galaxy’s Edge stretch longer than eight full-size buses. They will remain in place into 2020. 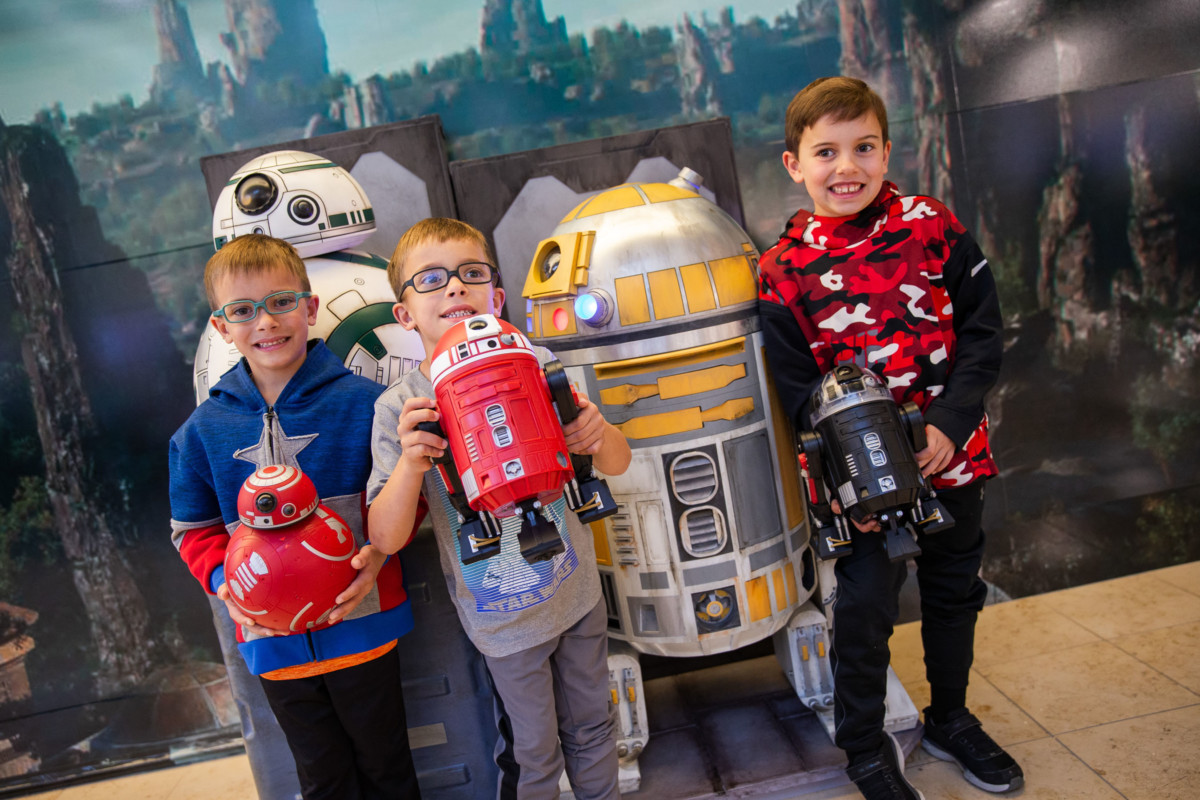 More new fun and excitement from a galaxy far, far away can be had elsewhere inside Orlando International Airport. Also debuting today at the Magic of Disney store in the Main Terminal West Hall – available to all airport guests, with or without boarding passes – is a new photo location featuring droids from the Star Wars galaxy. When the airport’s second Magic of Disney store, in the Main Terminal East Hall, reopens Nov. 22, 2019, it will feature a 36-foot-long video screen on an exterior wall showing scenes from Star Wars: Galaxy’s Edge. This will be another ideal photo spot, giving visitors an enticing glimpse of the new land.

Star Wars: Galaxy’s Edge invites guests to live their own Star Wars adventures at Disney’s Hollywood Studios. They can take control of the Millennium Falcon, build a droid or a lightsaber, sample galactic food and drinks and discover much more. A groundbreaking new attraction, Star Wars: Rise of the Resistance, opens Dec. 5, 2019, inside the land, bringing guests into a climactic battle between the Resistance and the First Order in an experience of cinematic scale.

Romantic Disney: How Disney Souvenirs Improve the Quality of Life