Welcome to another wonderful day at the Magic Kingdom! It’s an action-packed day as we check out all the projects going on in and around the park, and we’re happy to have you along for the ride. 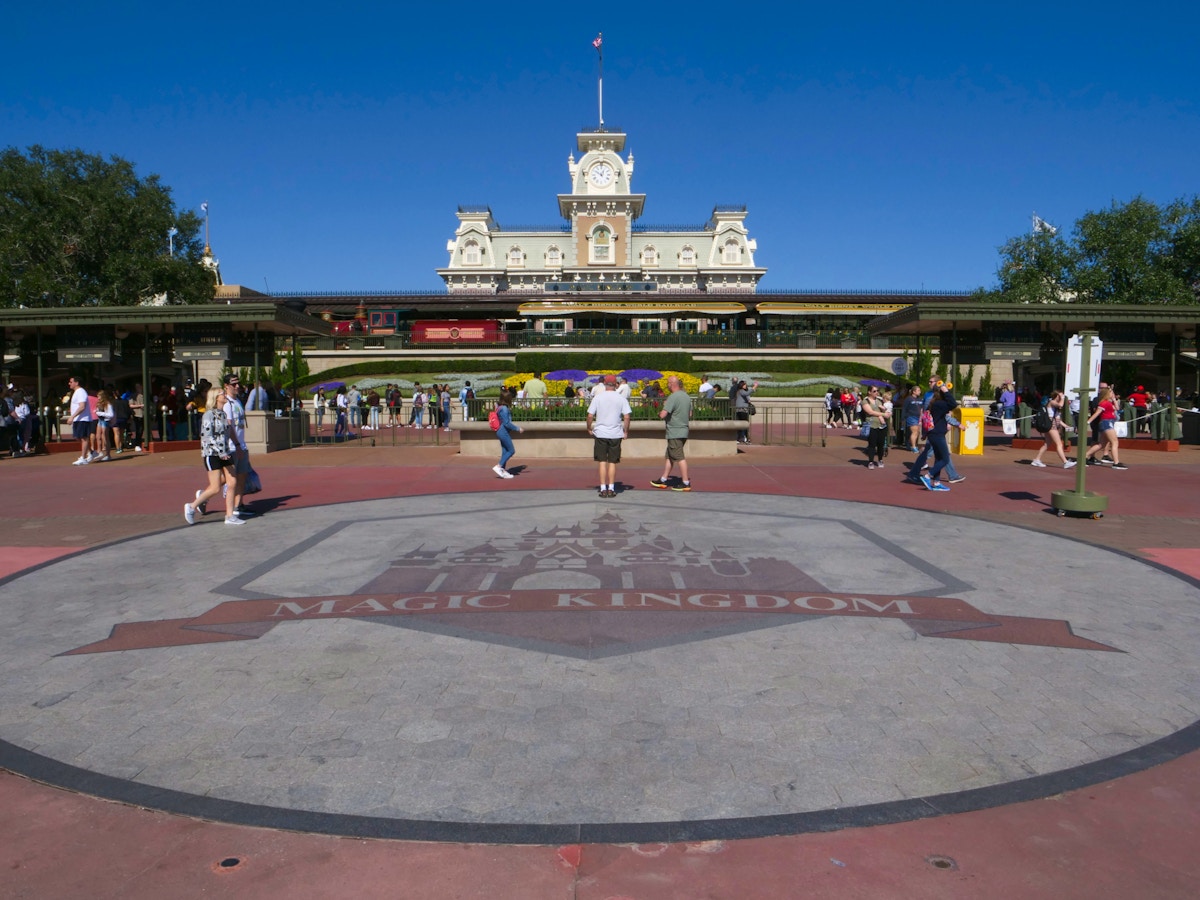 Naturally, the magic of the Magic Kingdom extends beyond the turnstiles. 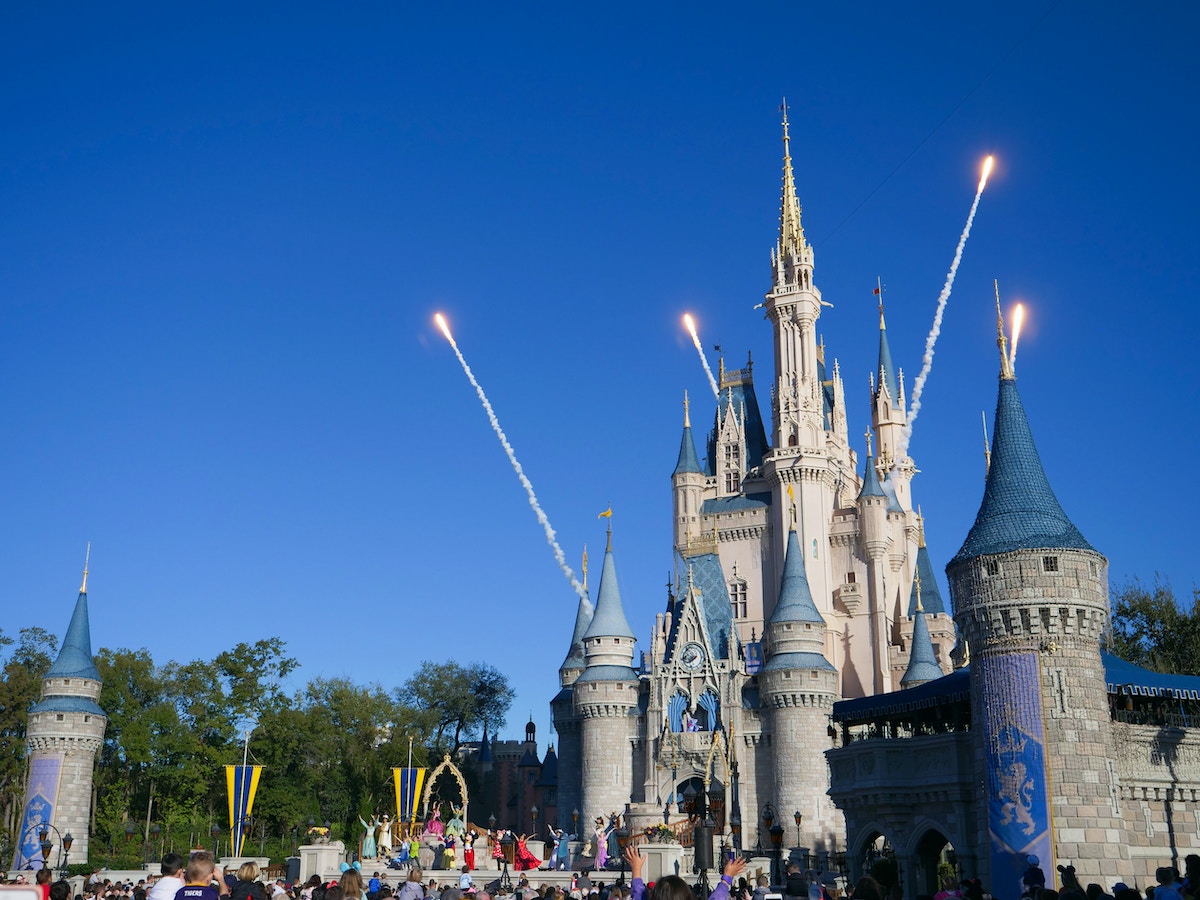 The “Let the Magic Begin” opening ceremony is a must-see to get your day in the Magic Kingdom started off right. 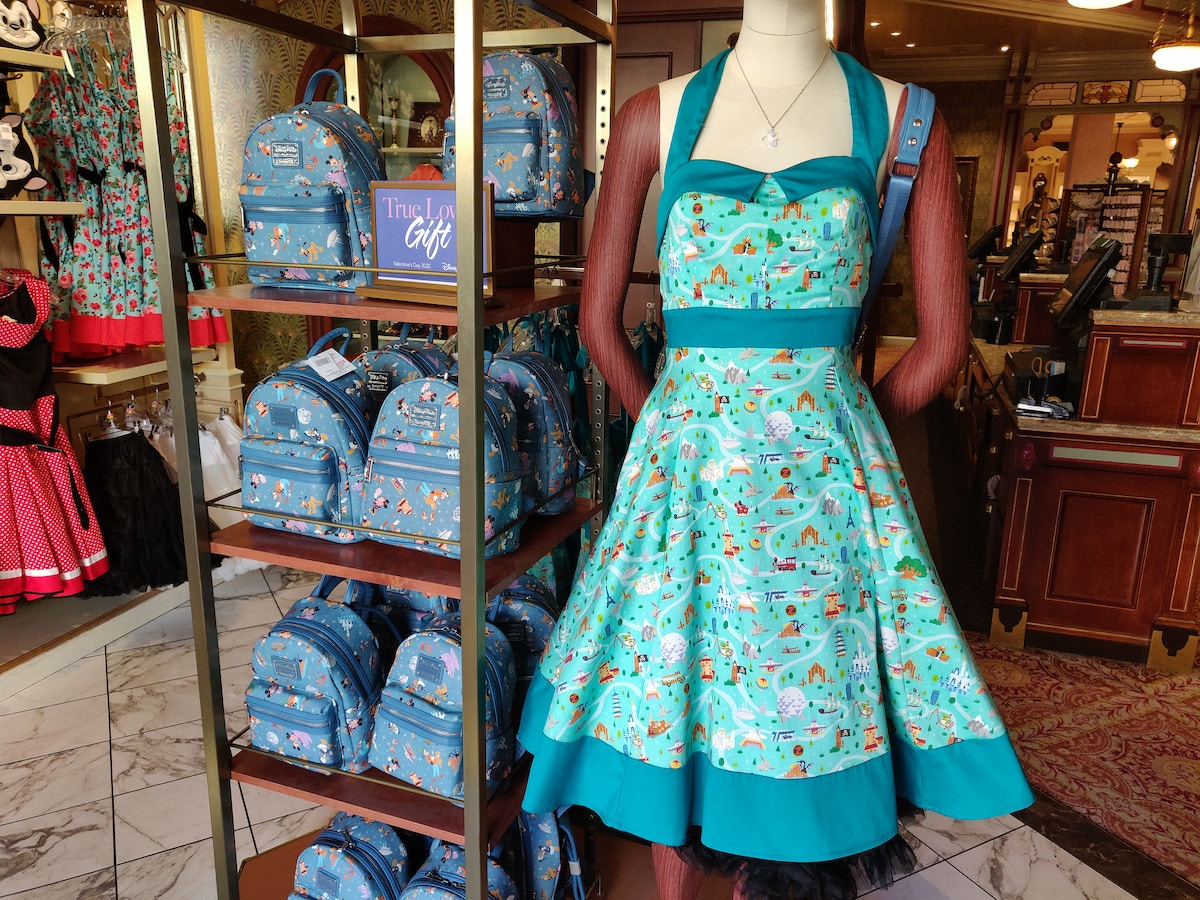 On Main Street, the Park Life dress that we presented in detail from Disney’s Hollywood Studios yesterday has made an appearance here, prominently featured in the entryway of Uptown Jewelers. 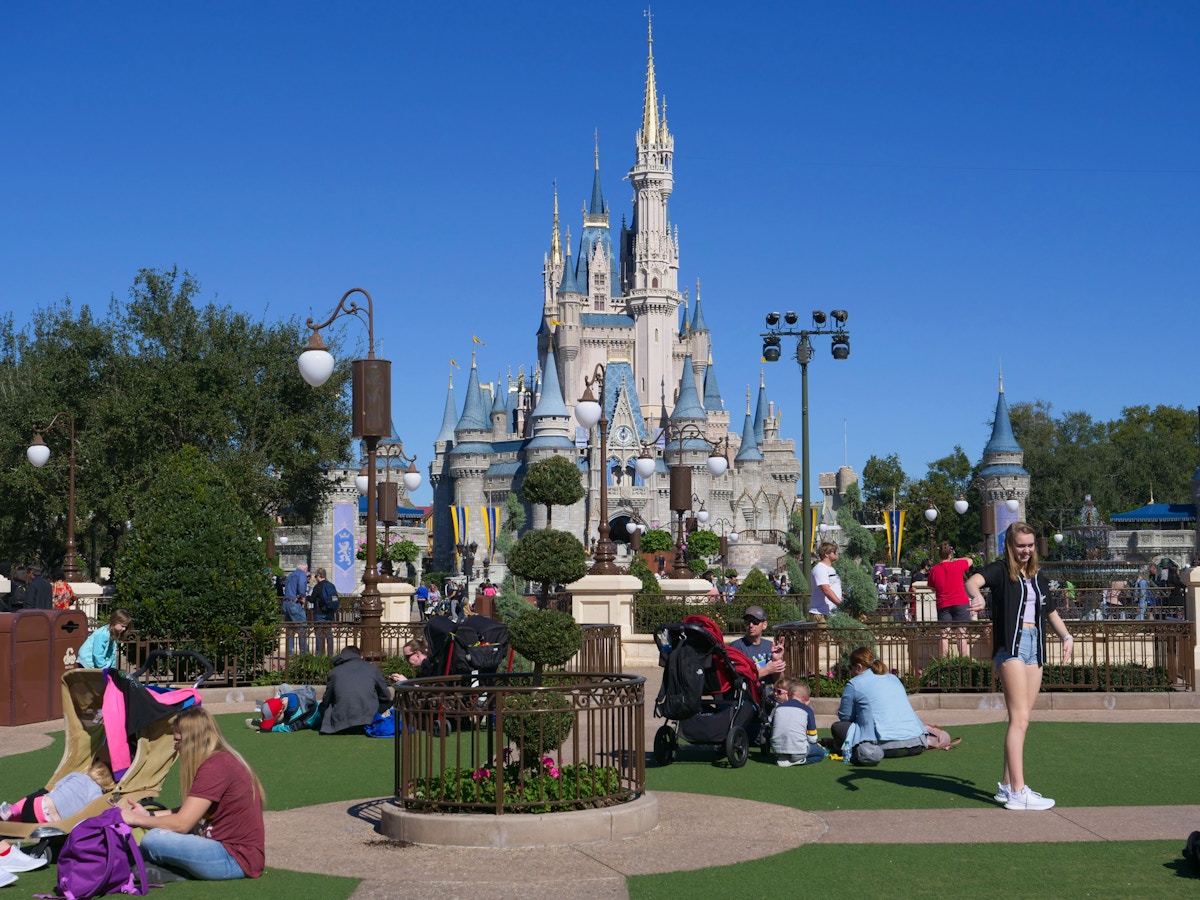 The weather was nice enough to have a picnic (or nap) outside near Cinderella Castle. Cool temperatures welcomed park-goers, with clouds and rain nowhere to be found. 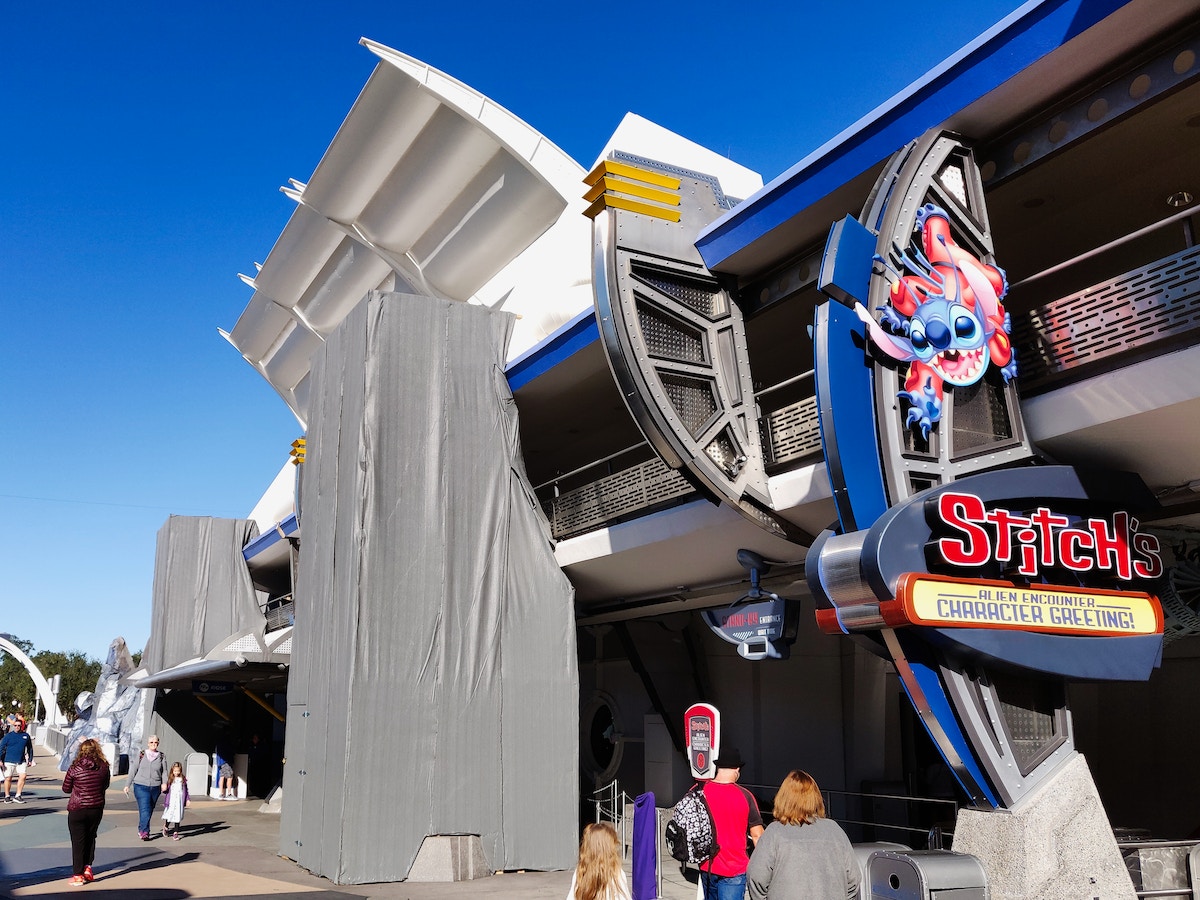 In Tomorrowland, we can see a couple of the posts that surround the Tomorrowland Transit Authority PeopleMover have scaffolding and scrim around them as the refurbishment to remove the semi-circular accents continues. 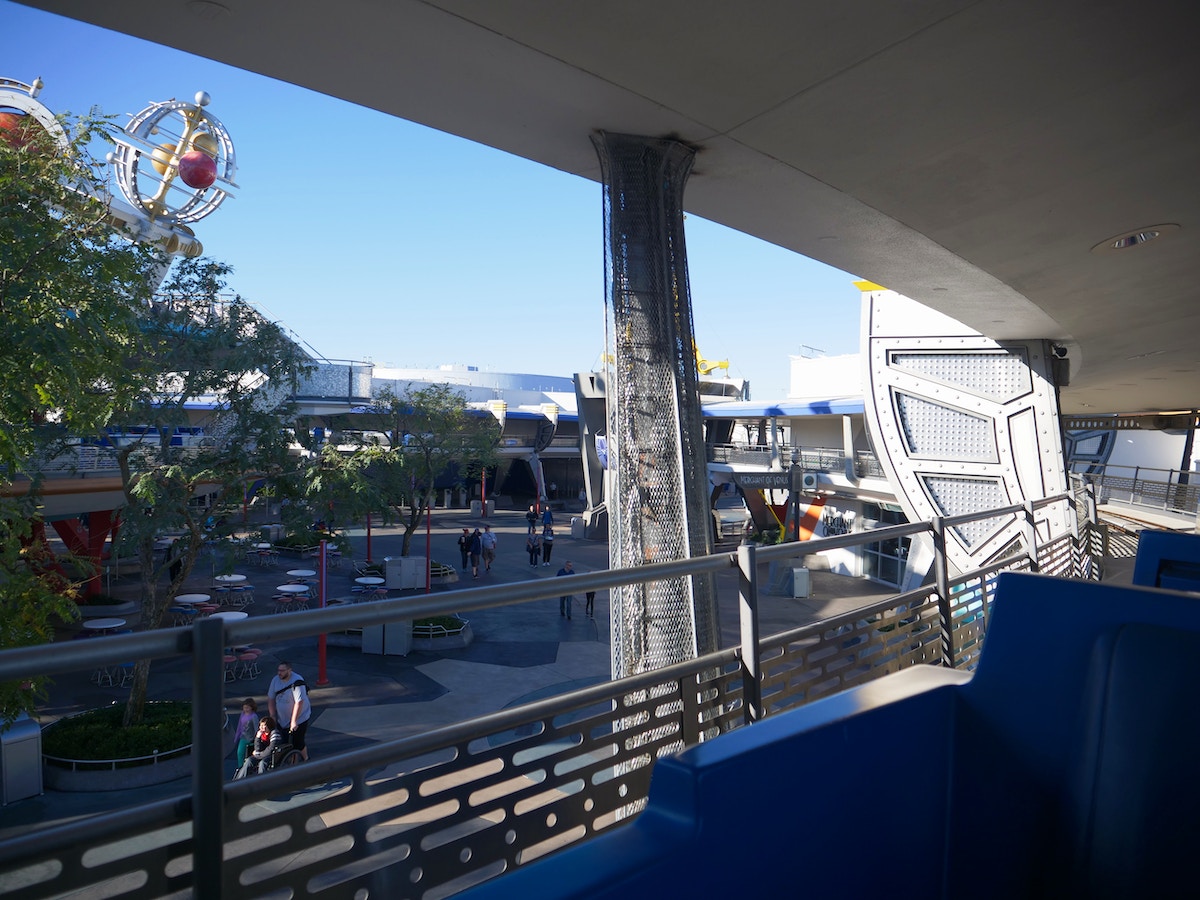 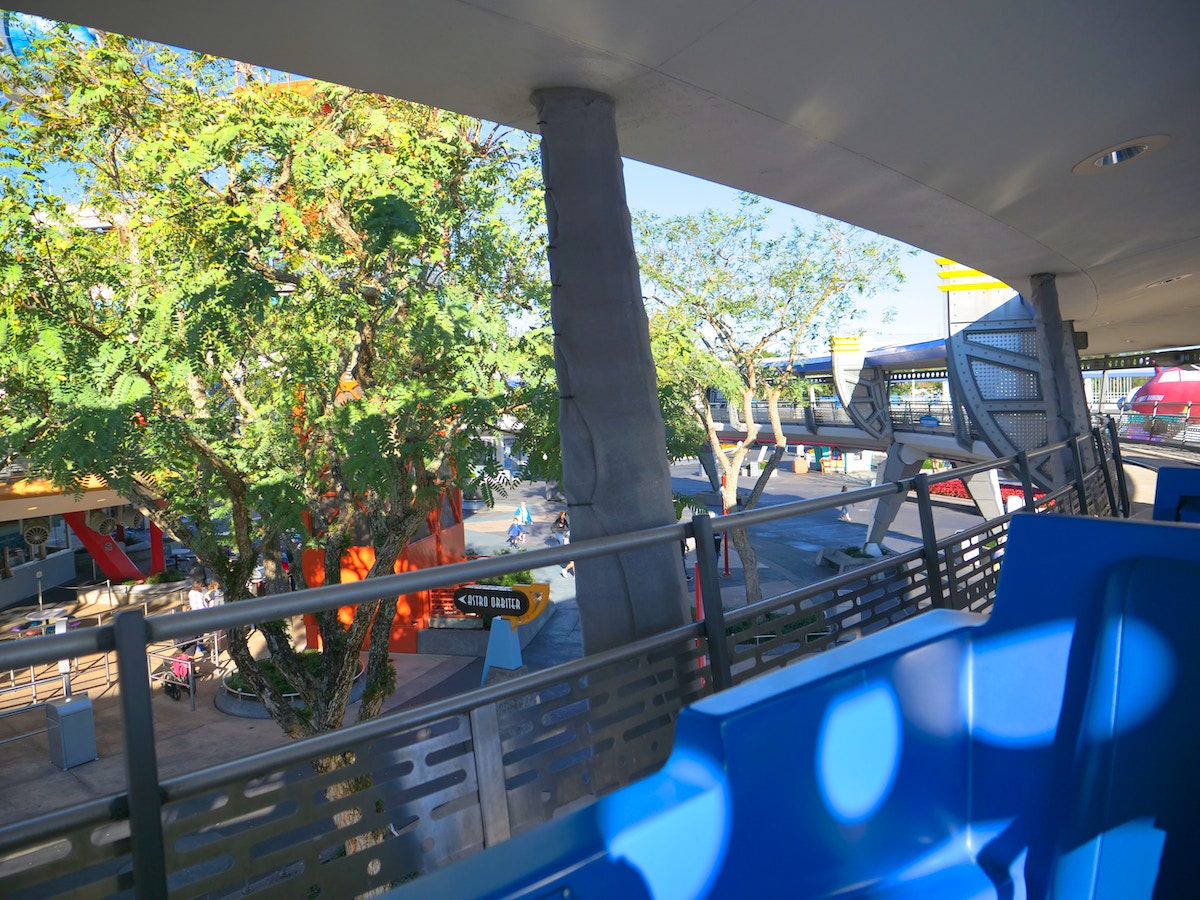 Some of the posts are a bit further along with the accent piece already removed, and many with new cement in place. 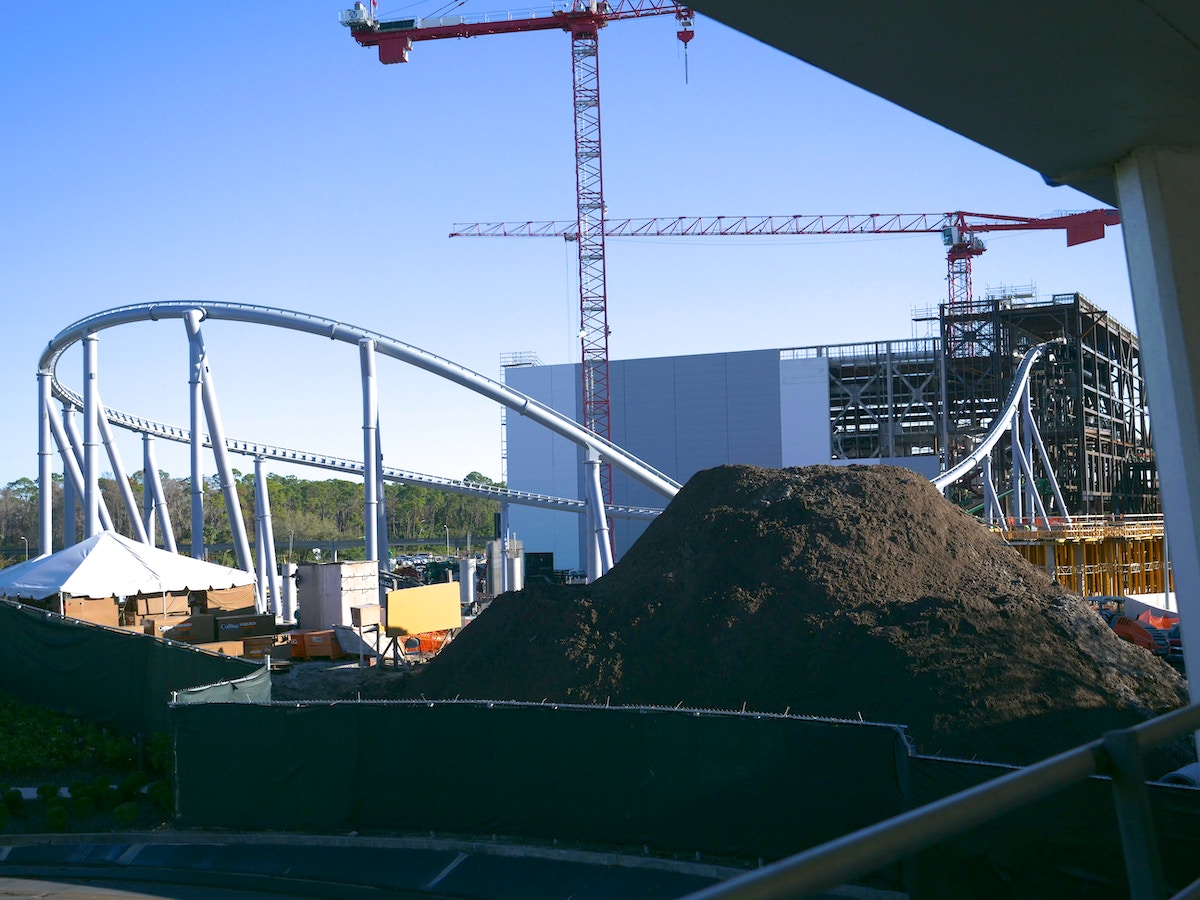 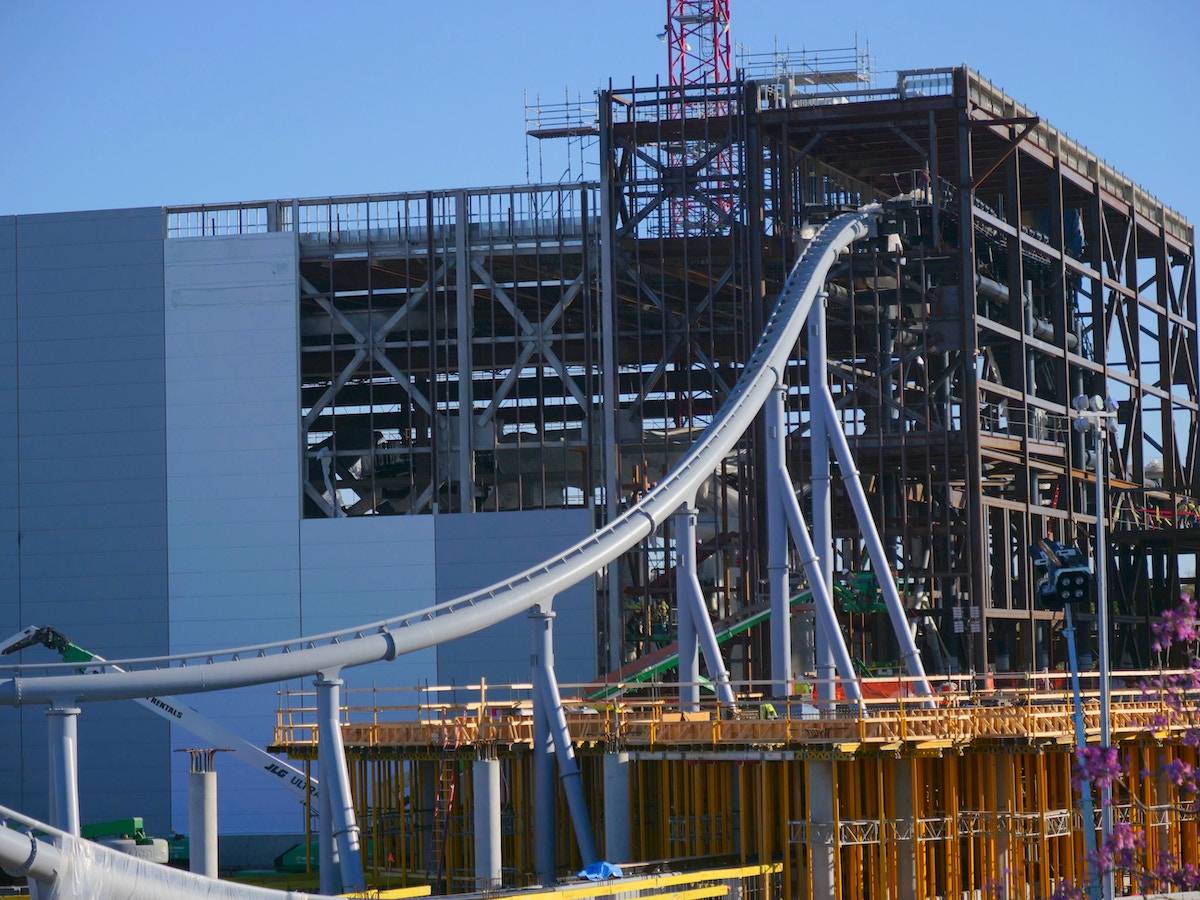 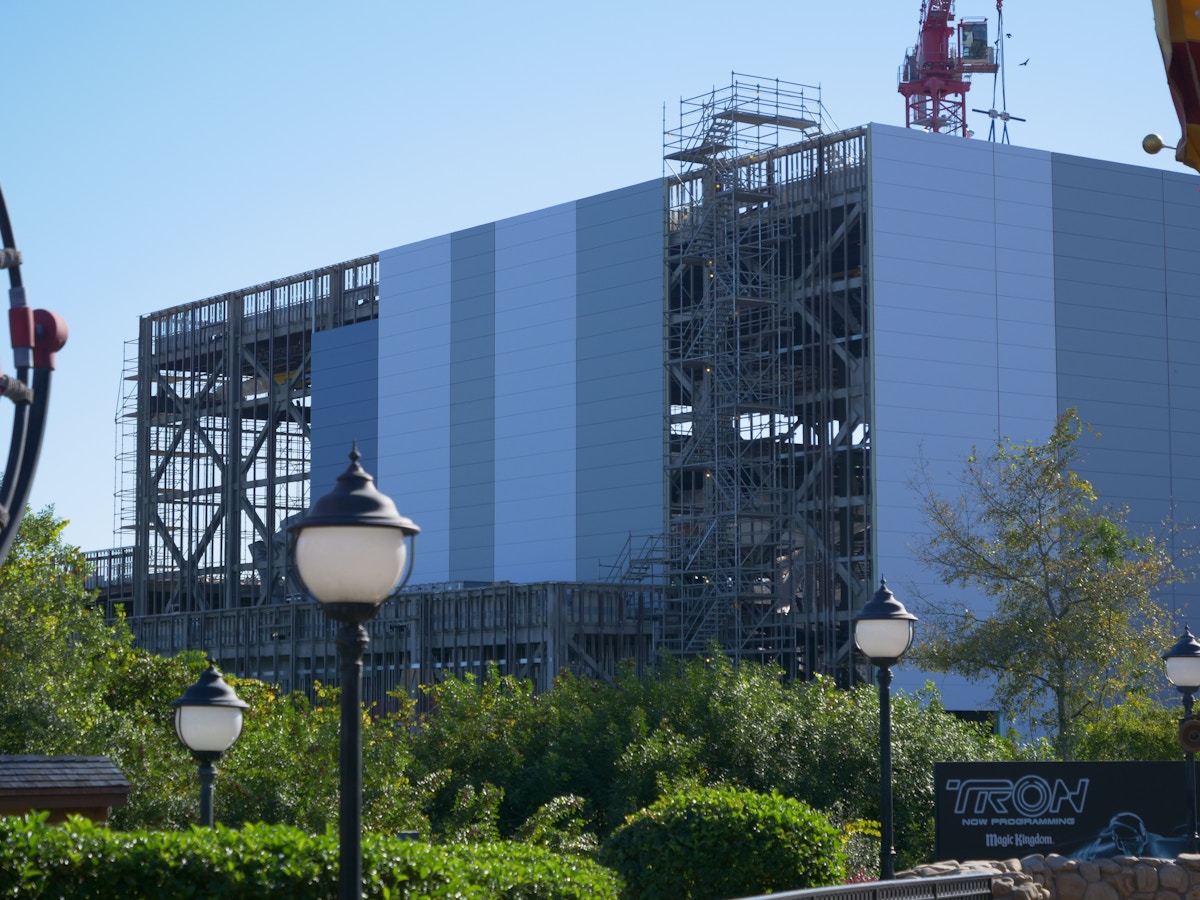 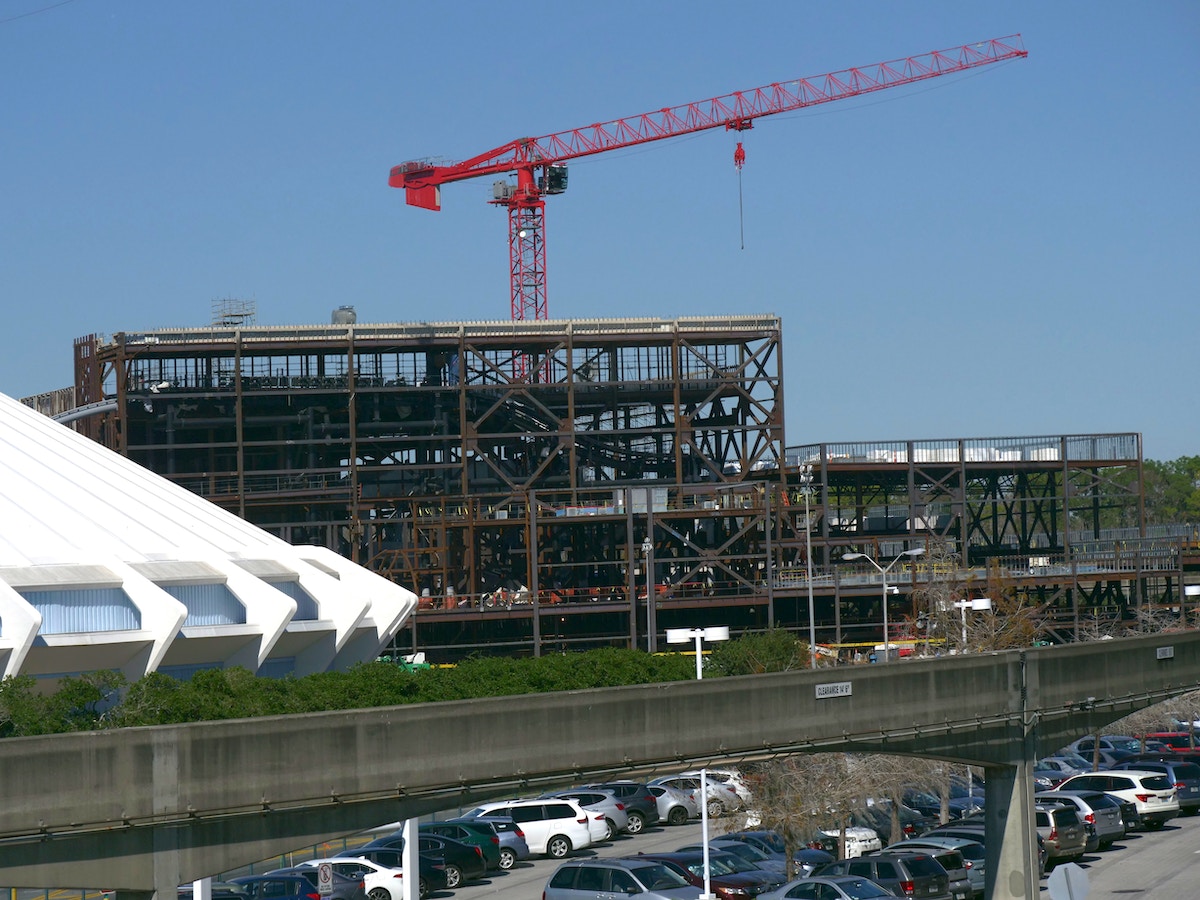 We can see additional panels have been added to the outside of the main show building on the sides facing Tomorrowland and Storybook Circus. 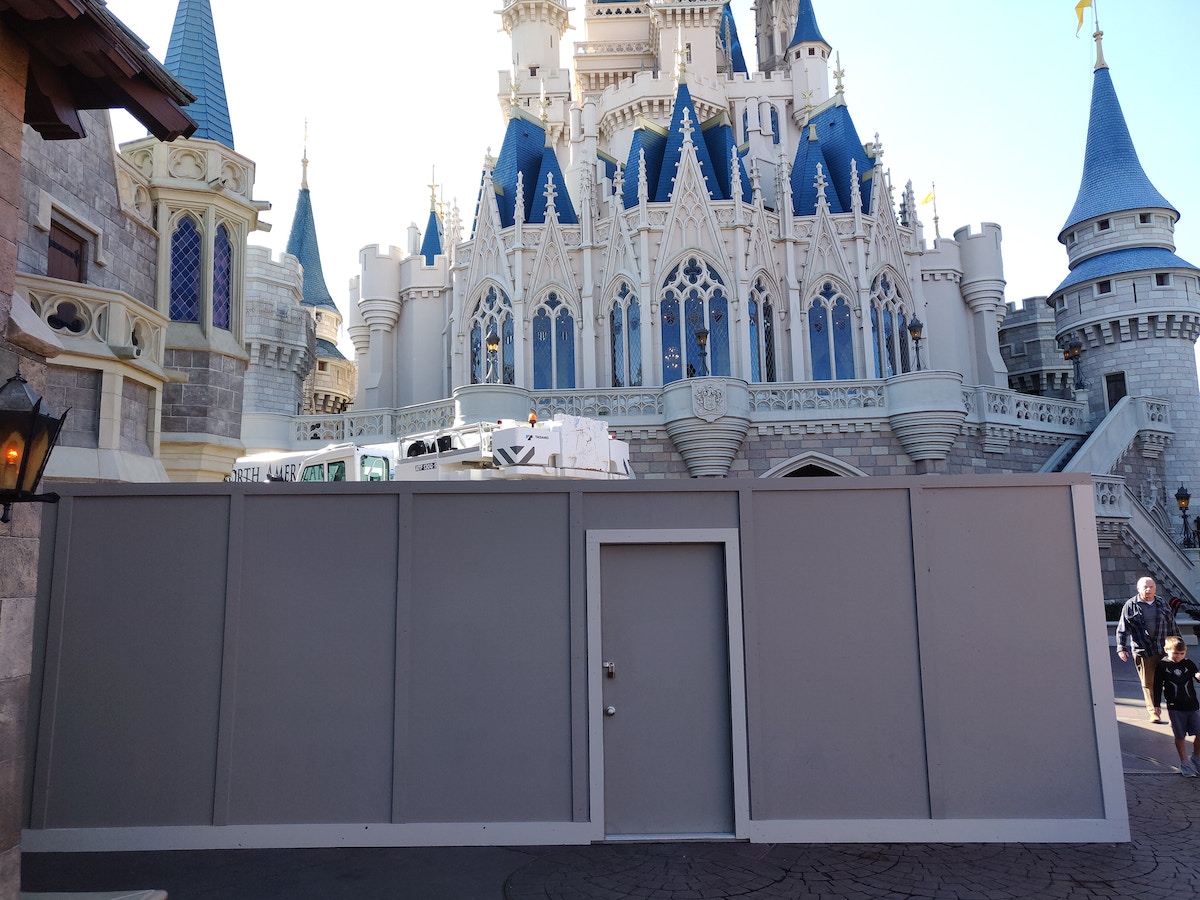 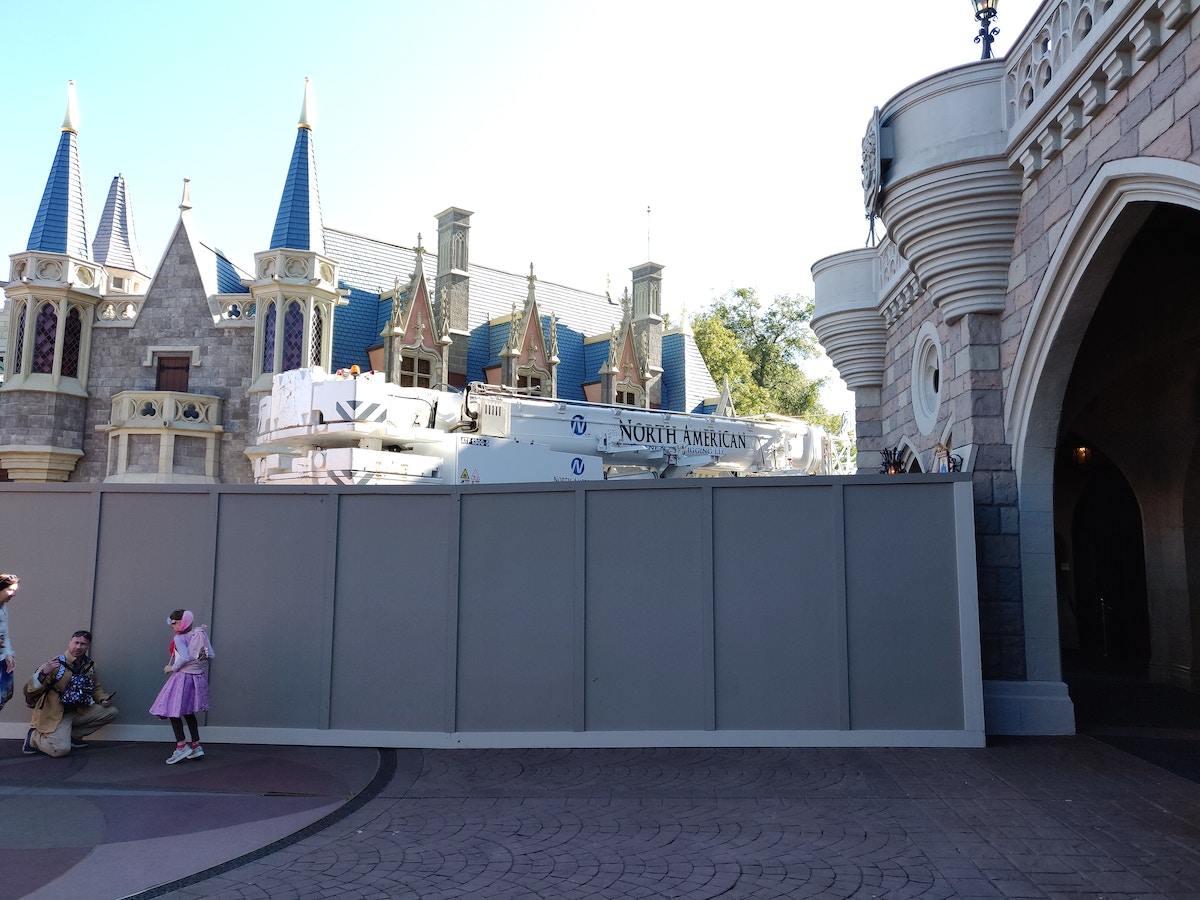 A crane at the backside of Cinderella Castle is surrounded by walls and used to remove holiday decorations from the castle. Keep in mind: this blocks the walkway from the castle to Tomorrowland. 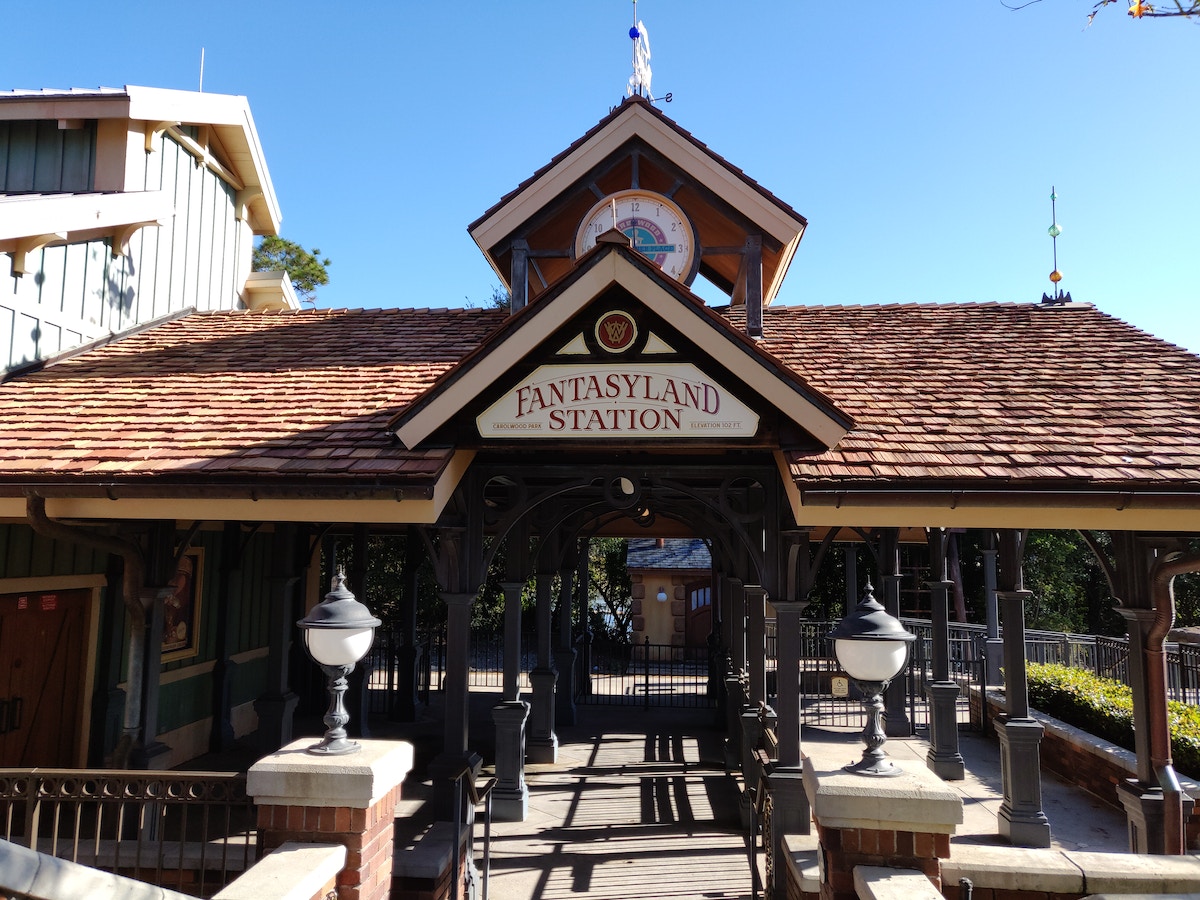 As we recently reported, the Walt Disney World Railroad train exhibit will move to the Fantasyland station. Read details about its scheduled move. 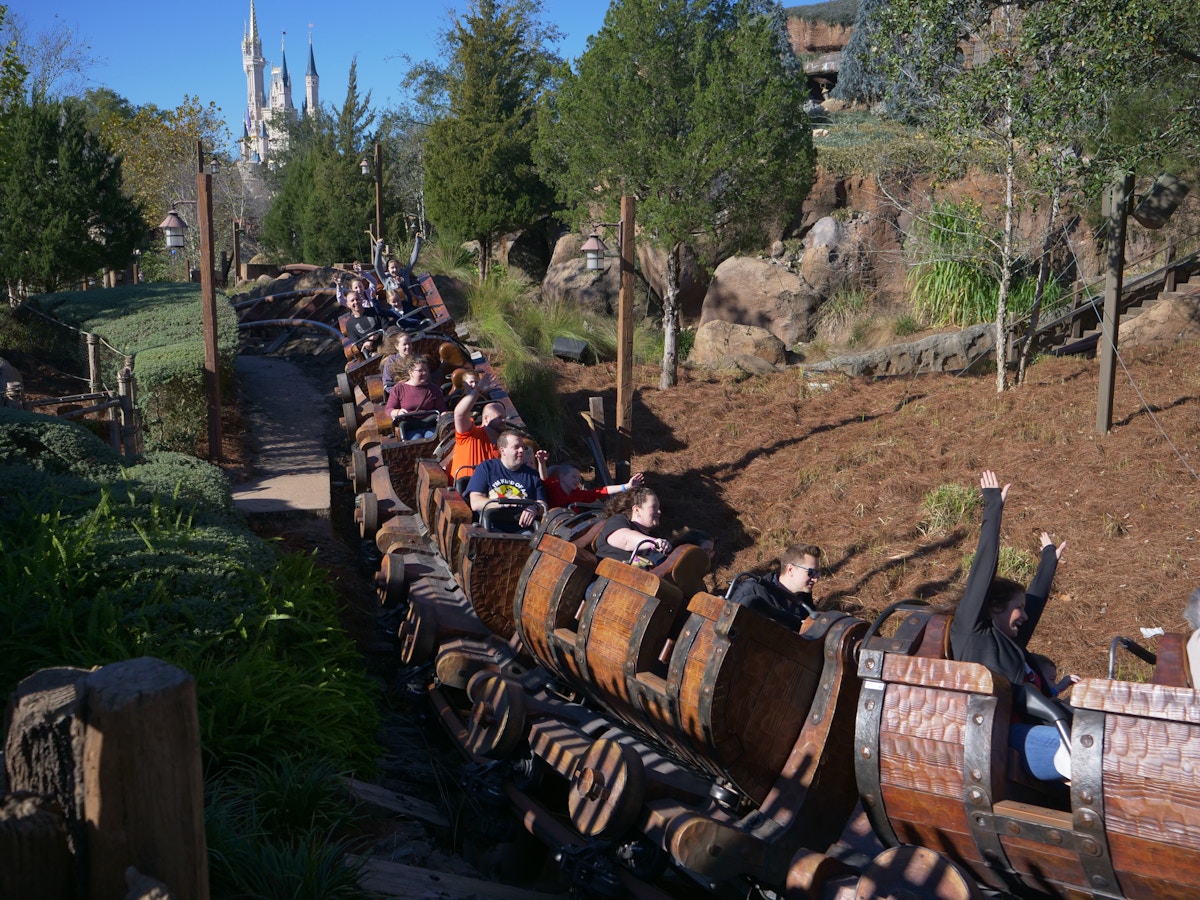 Guests are having tons of fun riding Seven Dwarfs Mine Train in Fantasyland, despite the longer wait time that frequently accompanies the attraction. 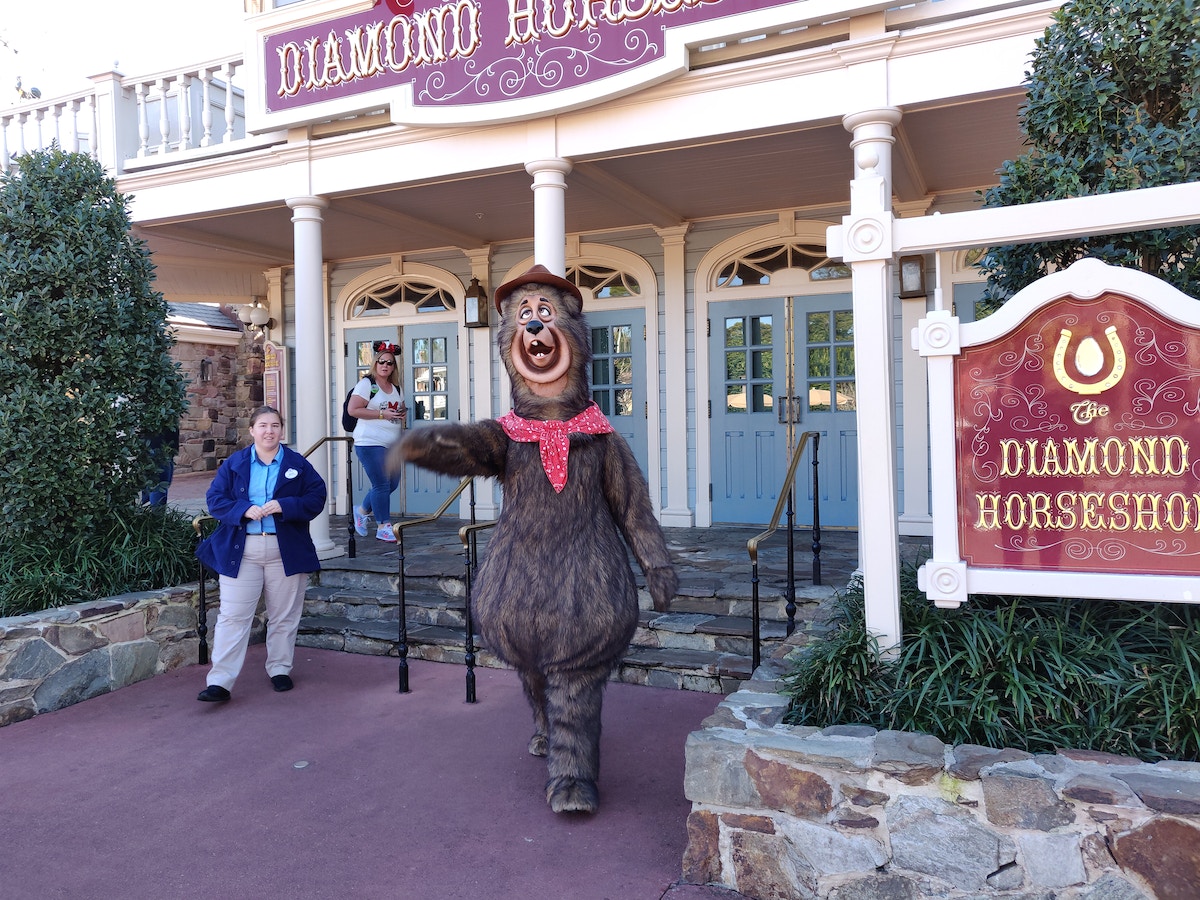 Shaker was kind enough to welcome us to Frontierland. 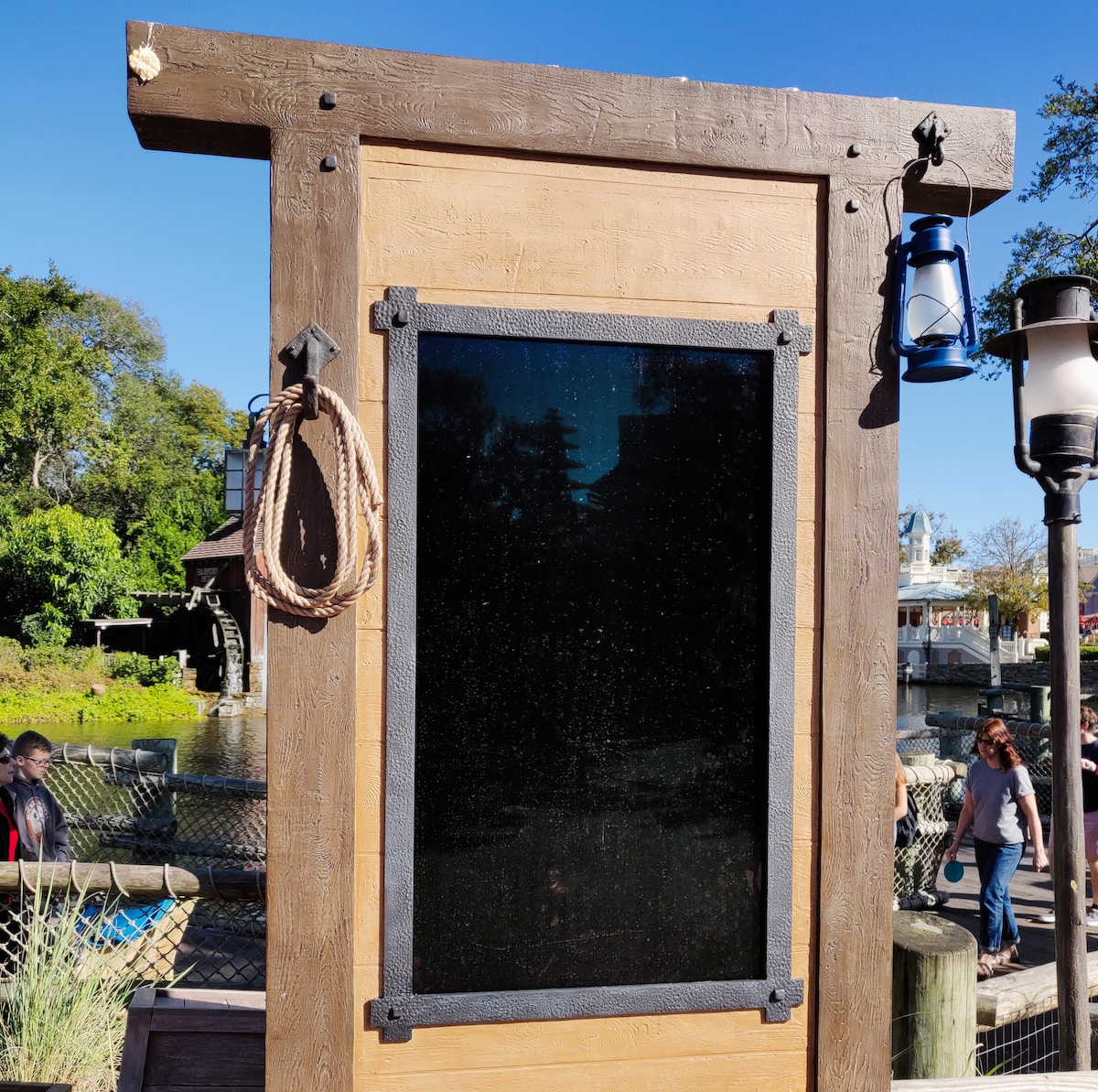 Unfortunately, the digital tip board in Frontierland was not as helpful as Shaker. It was not operating when we stopped by. 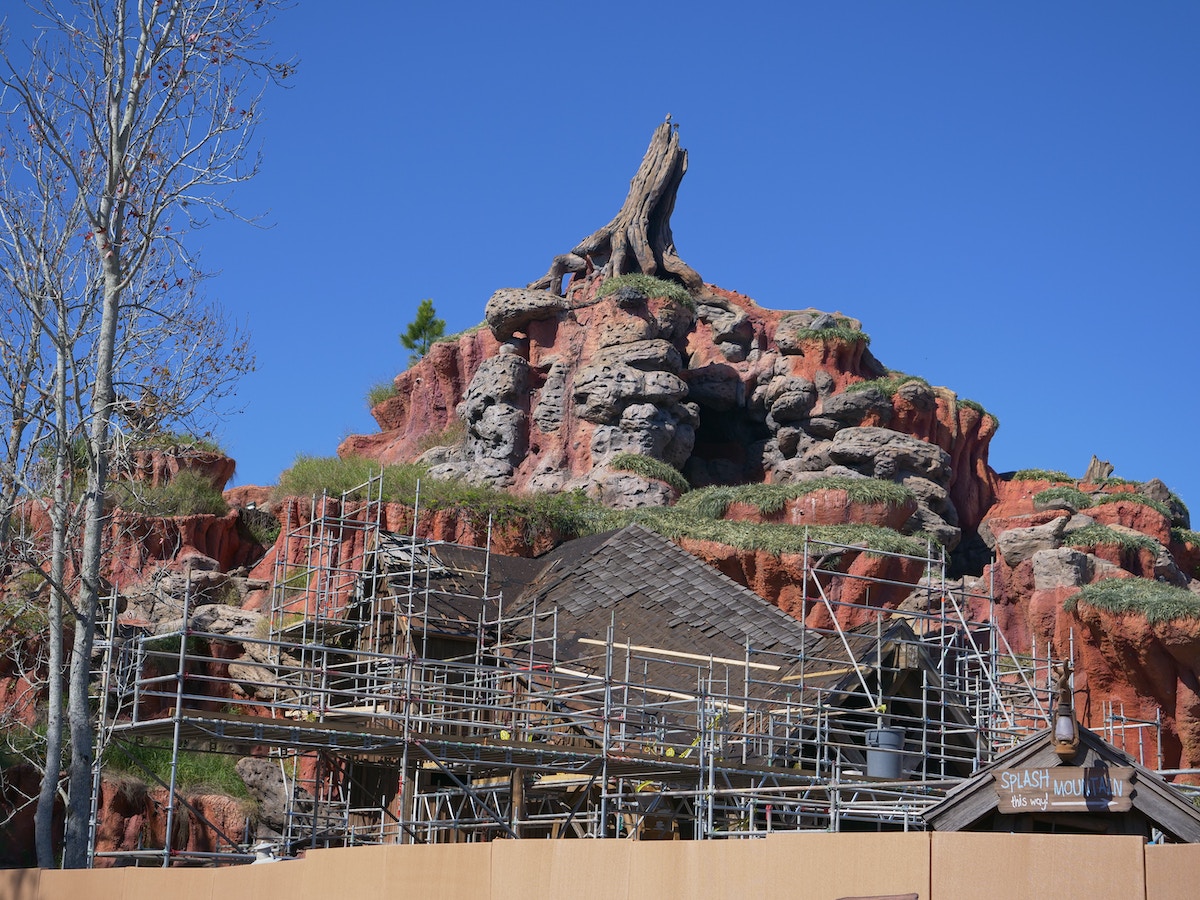 At Splash Mountain, the annual refurbishment presses on, with the barn currently getting a lot of attention from workers — especially the roof. 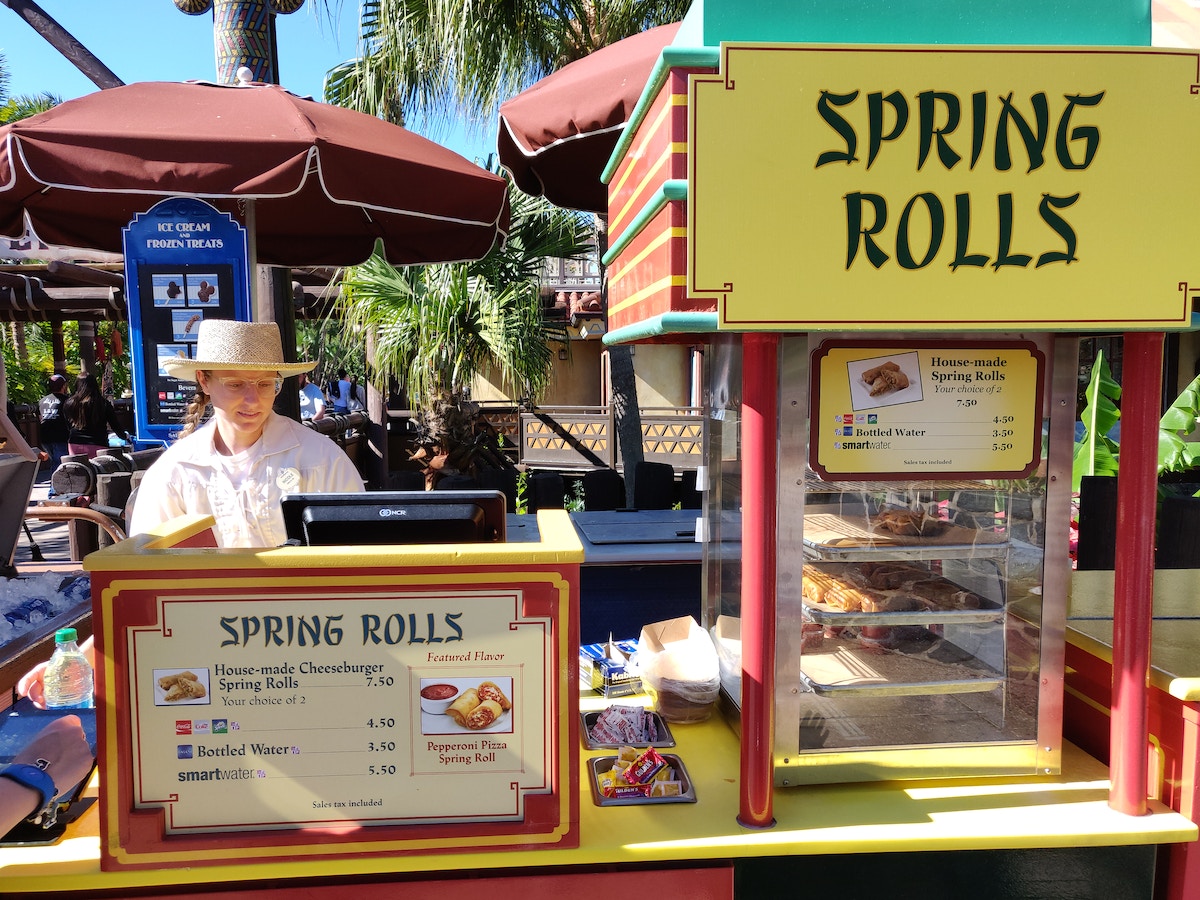 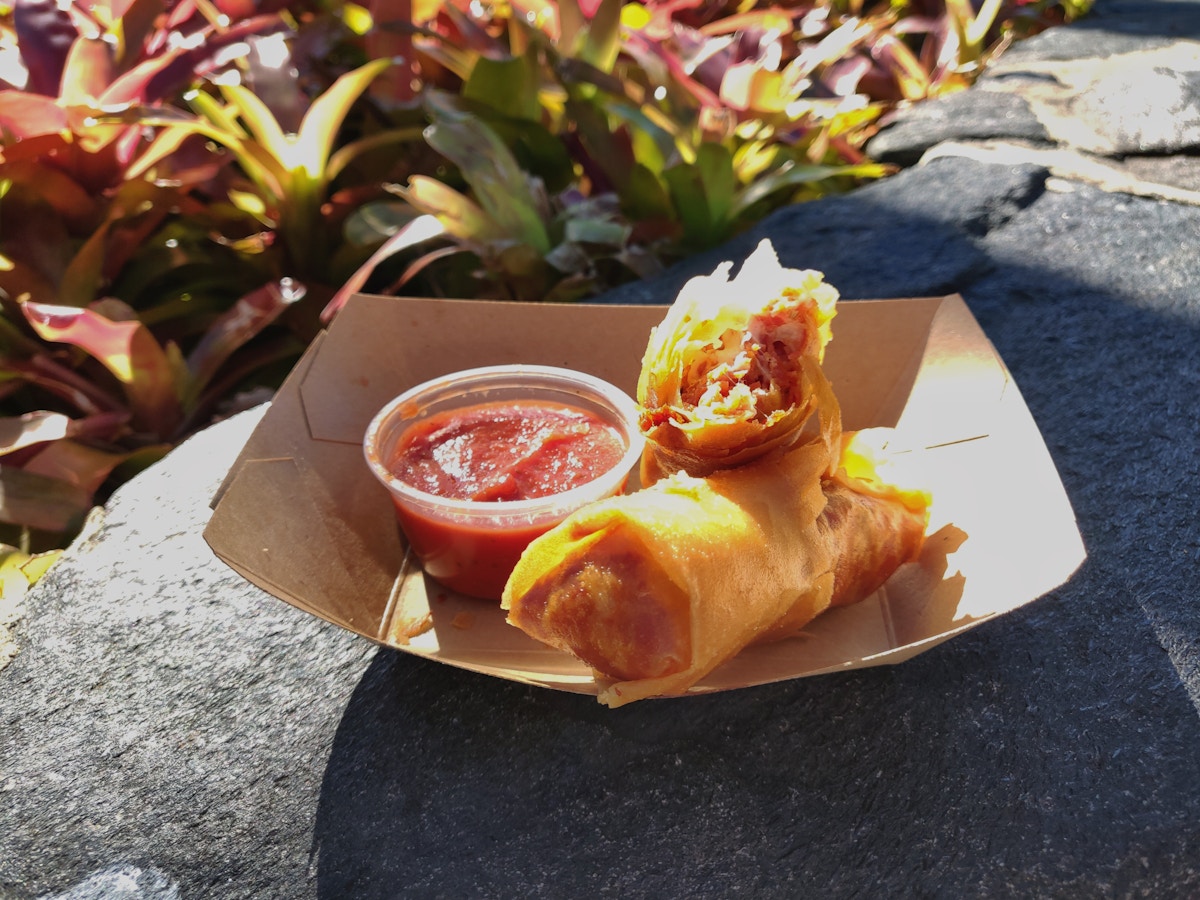 Over in Adventureland, waits for Pirates of the Caribbean and Jungle Cruise were 70 and 75 minutes long, respectively. So what did do instead? We grabbed an order of pepperoni pizza spring rolls, of course! This cart can be found near the entrance of Adventureland and currently offers pepperoni pizza and cheeseburger varieties. 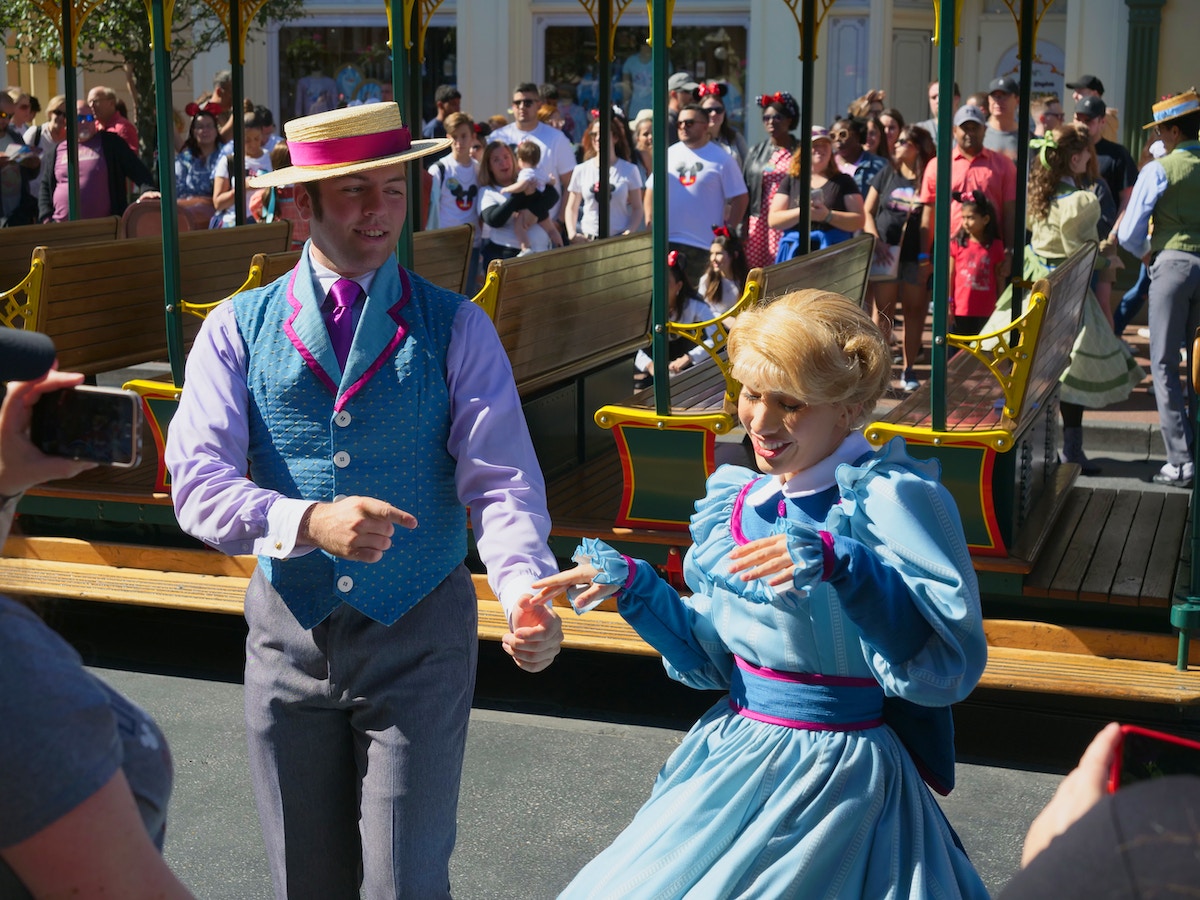 Back on Main Street U.S.A., we caught the Main Street Trolley show that features some talented dancers. The show is performed multiple times along Main Street as the trolley moves toward the park entrance. 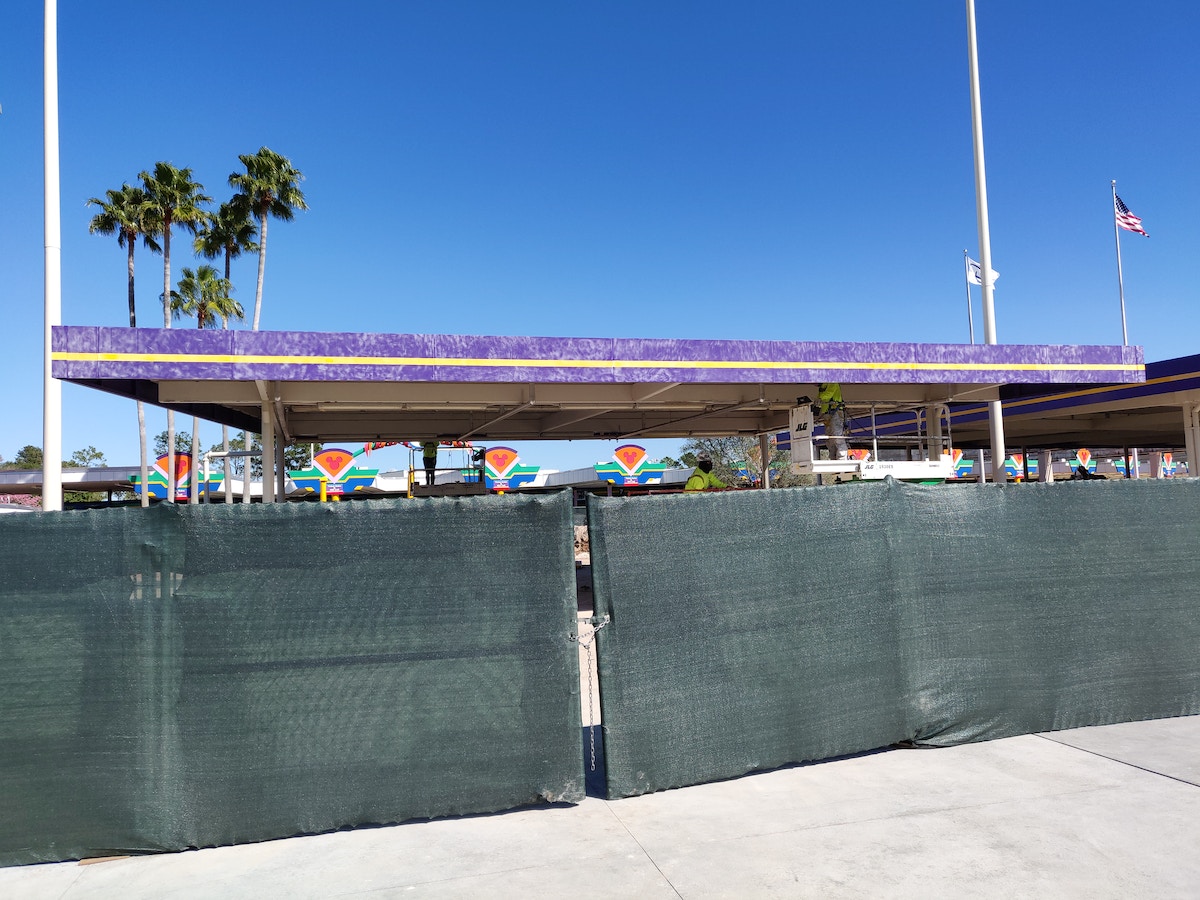 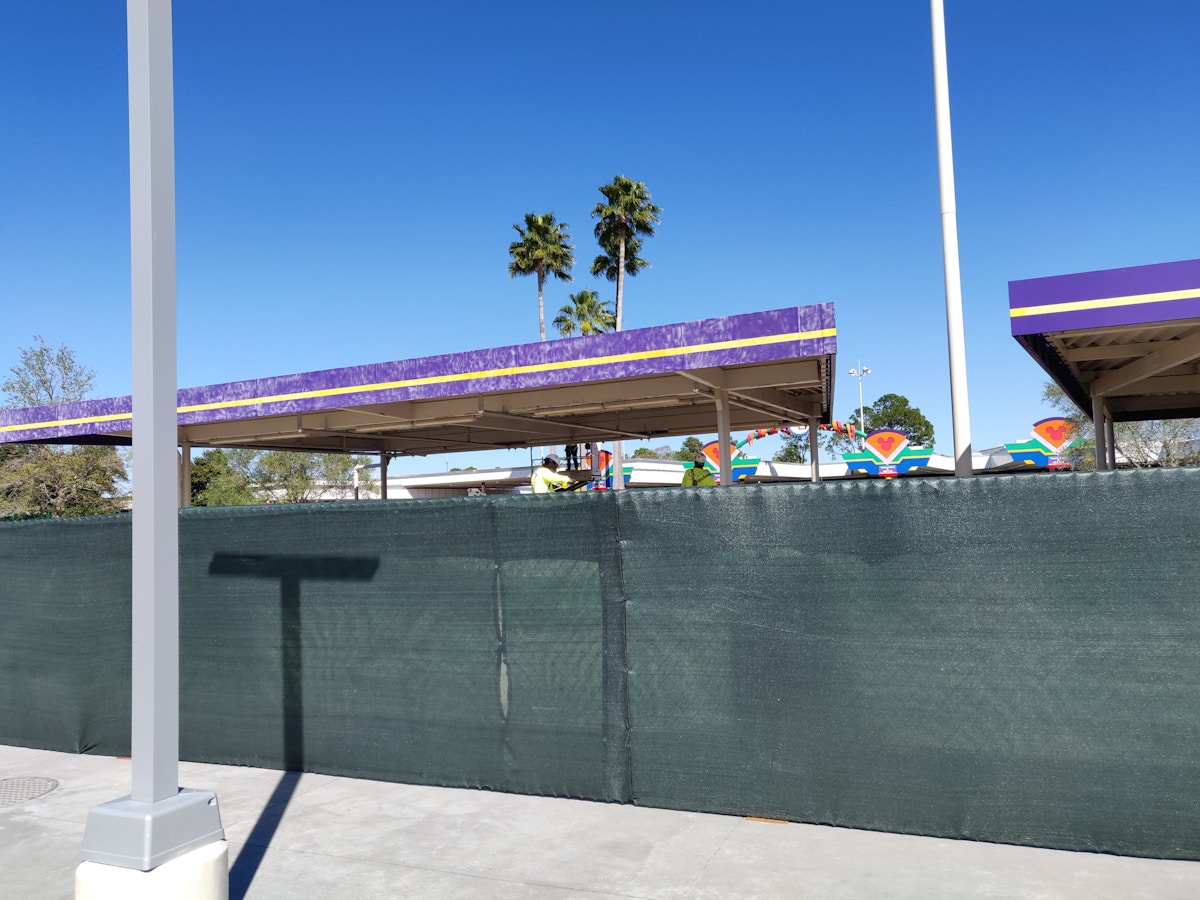 Finally, back at the Transportation and Ticket Center (TTC), work continues on improvements to much of the area. Workers were seen grinding and sanding parts of the overhead structures, likely making way for new color schemes and designs.

Thanks for joining us on this trip through the Magic Kingdom! Are you especially looking forward to the completion of certain construction projects? Let us know which ones in the comments!