With news breaking of a Jungle Cruise boat sinking at the Magic Kingdom, guests are now sending in images of the boat taking on water. They’ve seen the backside of water, but on today’s cruise, they’re getting to see the underside of water. 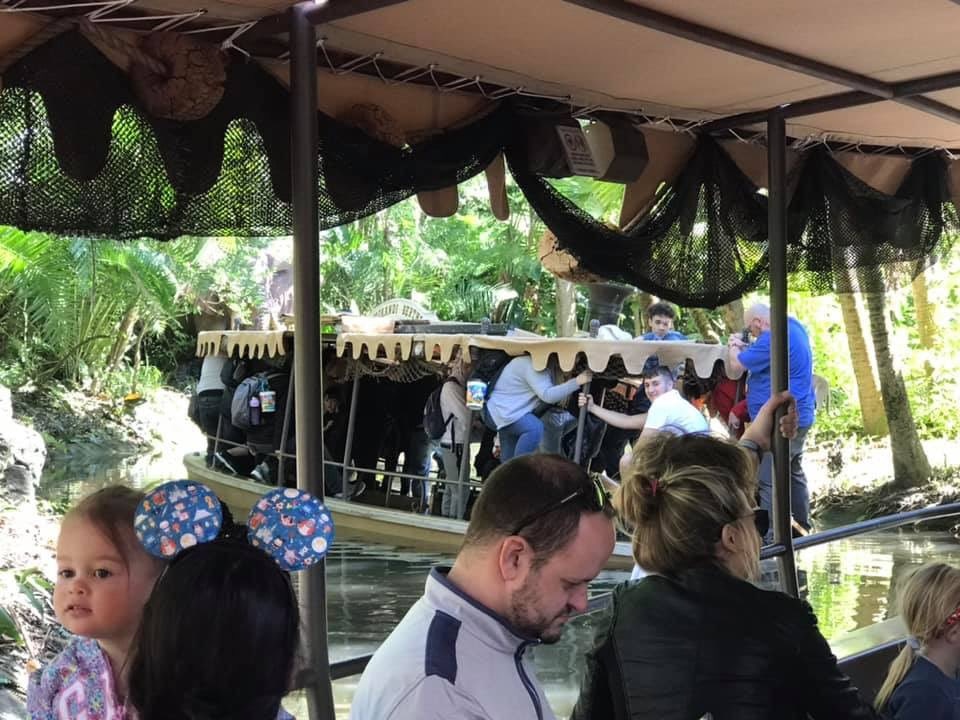 In this photo, we see guests from another boat looking out at the sinking vessel as guests climb up to avoid getting even more wet. There’s even a guest standing up by the hull of the boat. Luckily, the waterways are surprisingly rather shallow throughout the attraction.

Twitter user @synewaves shared this photo of various guests’ feet well underwater, even as they stood on top of the boat’s bench seating to stay somewhat dry. On the right is the boat’s wheelchair lift. This is one of the two boats for the attraction that are equipped with wheelchair lifts, meaning until this boat is repaired, guests in wheelchairs looking to transfer onto the Jungle Cruise may see some longer waits.

The boat, seen here as the Bomokandi Bertha, sank at approximately 12:30 PM, causing the ride to be shut down. The incident caused an interruption of 105 minutes, just enough time to unload the soaking passengers and tow away the sinking boat. There have been no reported injuries.

Jungle Cruise has been reopened after an interruption of 105 minutes. https://t.co/vQYBwvBzj7 #MagicKingdom #WDW #WaltDisneyWorld #DisneyWorld

A video has also surfaced of the affected guests being aided off the sinking vessel and onto dry land by Cast Members. Guests had to be evacuated onto the heavily vegetated, on-stage “jungle” part of the attraction due to their distance from the boat dock.

The only other reported boat sinking for the Jungle Cruise was back in 2004, when the Sankuru Sadie sank after taking too much water, but was quickly returned to service.

We will continue to update this post as this is still a developing story.

Next
BREAKING: Jungle Cruise Boat Sinks With Guests Inside at the Magic Kingdom