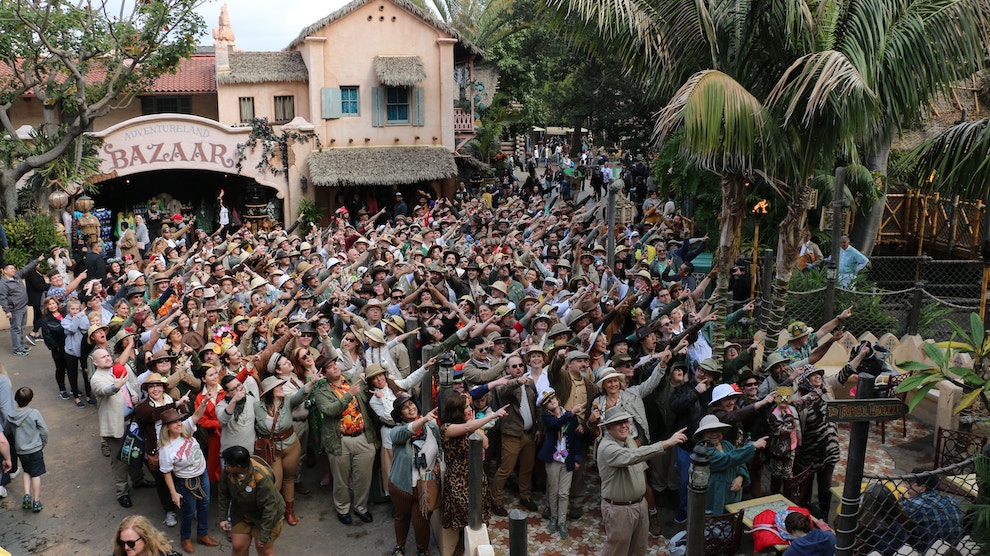 Editor’s Note: This is a guest post by Freddy Martin (http://freddymartin.net/).

What do you get when you cross Disney fans and cosplayers with tiki culture and a whole lot of khaki? You get Disneyland’s wildly popular, jungle-themed dress-up event, Adventureland Day.

On Sunday, March 1, “Adventurelanders” from across the country arrived at Disneyland’s gates dressed in their finest safari gear, Hawaiian shirts, and leopard print skirts to celebrate their love of Walt’s “true-life adventure” themed land. In its third year since being founded by California tiki artist, Tiki Tony Murphy, the event was its biggest yet boasting an estimated 900 participants joining in the festivities.

In the weeks leading up to the event, participants were sent a volley of text alerts with details about the scheduled activities and clues for a park-wide treasure hunt. The day began when Adventurelanders arrived at the Tropical Hideaway to admire one another’s costume creativity and to fuel up with Dole Whips. After a quick group photo, they filed into Walt Disney’s Enchanted Tiki Room to sing along with the birds of paradise, toucans and macaws.

The Jungle Cruise was next and the skippers were ready for them. The upstairs queue area had been extended to capacity in order to accommodate the throng of pith-helmeted explorers waiting to board. Boat after boat left the dock, each one crammed with guests excited to laugh heartily at the jokes as though they’d never heard them before. Loud cheers were heard as each returning boatload showed their gratitude to their intrepid jungle skippers.

Next, they all gathered for a large group photo along the edge of the Rivers of America next to the Hungry Bear Restaurant. This is one place in the park large enough to accommodate a group photo of this size. The Mark Twain steamboat passed by to photobomb the assembly, and even Tiana from Princess and the Frog waved from the deck of the boat as the throng sang the Adventurers Club All Purpose Theme Song.

The treasure hunt began with a flurry of clues texted from Michael, Fritz, and Pierre, three of the parrots from the Tiki Room. Each message provided clues that would lead guests to find and count park details they might never have noticed before. They zig-zagged from one end of the park to the other looking for teeth, Matterhorn wires, and bamboo poles to name a few. The hunt came to an end in ToonTown where successful adventurers picked up a special collectors pin designed by Tiki Tony.

Adventurelanders rounded out their day riding the Indiana Jones Adventure together before heading to Trader Sam’s Enchanted Tiki Bar for drinks and to tell stories of another amazing adventure-filled day.

Adventureland Day is held at Disney parks on both sides of the country. Disneyland’s took place Sunday, March 1. Walt Disney World fans will experience the event a week later on Sunday, March 8 at the Magic Kingdom.

Jason has been a lifelong fan of the Disney parks since his first visit at age 2. His biennial pilgrimages during his childhood accelerated into semi-annual visits by the year 2000, when he also Joined the Disney Vacation Club. Luckily, Jason’s bride-to-be was also a Disney fan, which allowed his infatuation with the Disney parks to continue, and ultimately culminated in their wedding at Disney's Wedding Pavilion in September 2003. Early in 2007, Jason began his involvement with the planning for what became Celebration 25, the unofficial fan gathering to commemorate the 25th anniversary of Epcot®. Soon thereafter, Jason met Tom Corless at a pin trading meet in New Jersey, and became part of the WDW News Today podcast starting with Episode 17. Jason has been involved with the WDWNT Network ever since, and can't seem to escape no matter how hard he tries.
Contact Jason at [email protected]