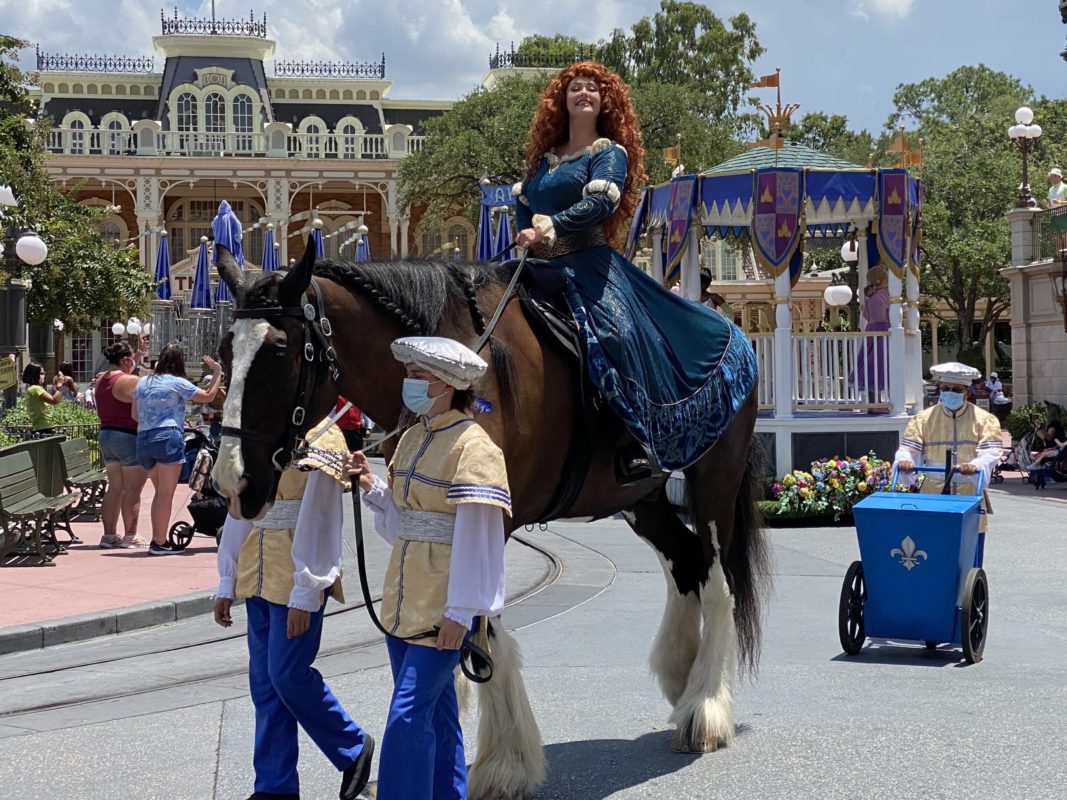 It was a quiet at the Magic Kingdom, but a quiet day at Disney is better than a quiet day anywhere else! The barrage of new merchandise seems to have slowed down a bit at this park, so we were able to concentrate on things outside of the shops. Let’s take a walk around!

After preparing the temperature check tents for Hurricane Isaias by tying back the walls, those preparations were undone overnight, and the tents have been returned to normal today. While having the walls down blocks breeze from that direction, we’re sure the Advent Health staff are glad for the protection from the sun.

On the monorail ride to the park, we caught a glimpse of the construction on TRON Lightcycle / Run. Work on the show building has been forging ahead, although we have been unable to follow any progress visually through lack of a clear vantage point.

When we entered the park we were greeted by Mickey Mouse and Friends who had come out on to the Train Station balcony to wave hello to guests. Donald in particular looks so happy to see us!

On Cinderella Castle stage, management was having an early morning meeting discussing improvements that could be done to the stage itself as part of the Cinderella Castle makeover. We are eager to see performers grace this stage once again, and when they do, they may even have new stairs to the upper levels, or so at least we have heard.

Down in the moat surrounding the Castle, the high reach heavy machinery that was used to paint the Castle was removed overnight. After following this project since before the closure, it now looks strange to see this area so empty.

Further down, we noticed a breach in the retaining wall where water was spilling over into the emptied area at an alarming rate. The pumps have either been turned off or were not working.

In addition to the machinery being removed, we noticed the supplies which had been stacked and tarped under this bridge were also gone. Nothing remains in the moat except sandbags and dirt to our eyes, so our hope is that the leak in the retaining wall won’t cause too much harm, and that the moat will be refilled soon.

At the Briar Patch, the windows have been covered in plastic, keeping guests from peering inside hoping to catch a glimpse of the elusive Br’er Rabbit plush. While the store reopened with the park on July 11, after being quickly emptied by guests of Splash Mountain merchandise, this location was closed in favor of all merchandise being moved to Splashdown Photos, which has since then employed a one-way traffic flow and a Virtual Queue as needed.

When Splash Mountain merchandise is sold out, Splashdown Photos stocks regular park merchandise, like it did today. With warehouse staff still diminished, merchandise restock at the parks is arriving slower than normal.

While anticipating the arrival of the new Extra Large size Disney brand face masks, we noticed that the “4 for $20” deal was missing. Masks are now $6 each, no deals, no discounts.

The Tomorrowland Transit Authority PeopleMover is still not operational, with no return date in sight. Cars are still stopped on the tracks throughout Tomorrowland, and have not moved in over a week.

We found some good news—the Raspberry and Pineapple DOLE Whip Swirl Float has returned to Aloha Isle Refreshments in Adventureland. We are so excited to see some of our favorite menu items returning to the parks.

Conversely, over at the Sunshine Tree Terrace, the “Swirl” part of the Citrus Swirl machine is broken, forcing Cast Members to create this new deconstructed Citrus Swirl concoction for guests wishing to mix the flavors. It gave us a good laugh as we enjoyed this still tasty if not slightly silly looking treat. For more pictures and information, see our full article here.

We had another laugh today as we found this plush of Dante from Coco in a full lucha libre costume, complete with mask and cape. Doesn’t he look dashing? For more pictures and information, see our full article here.

The custodial crew was hard at work today, as they are every day, keeping us safe by keeping the parks clean.

On our way out, we got to see Merida ride by on Angus. We love this pair! We had a great day at the Magic Kingdom, and we hope you enjoyed coming along with us. Have a magical day!